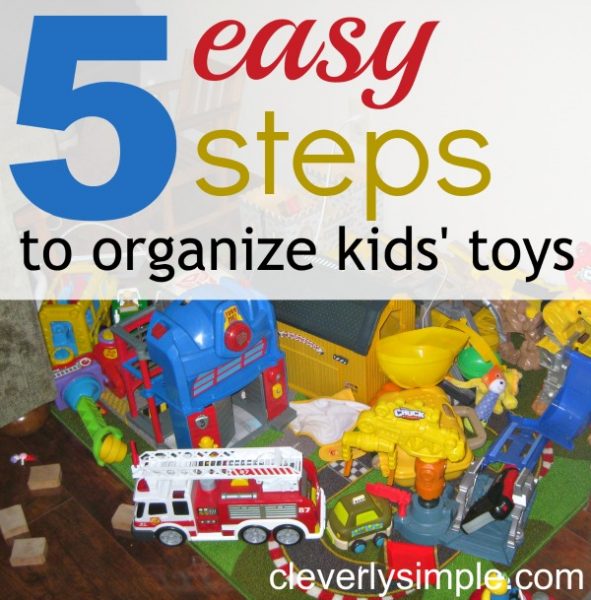 We needed to organize our toys in a big way.  They were taking over our living room.  And although, I’ve wanted to organize the toys in our home for quite awhile, I was clueless how to tackle the job.  It wasn’t because I didn’t want to, or because I didn’t know that organizing was key before the toy take over of 2013 occured. It was because my kids play with everything.  There was not one toy that they had not touch or played with that week.

How do I decide which toys to get rid of?  I came to the conclusion, that I didn’t have to do that.  I just needed to dig deep inside to my teacher days, and remember that we could organize the toys into groups or themes to conquer the toy mountain.

That means one bin of toys or theme a day.  That’s it.  The rest are organized in another place in the house.  At the end of the day, we take down the current toy bin to the basement and bring up the next one.  We rotate them to keep each day a new adventure! 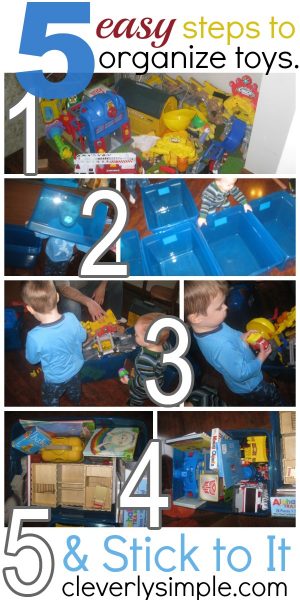 1.  Admit there is a problem and a need to organize.
There’s no motivation to conquer the toys until you realize that something has to happen.  For me, I was over our living room feeling like a play room.  With no finished basement, or designated play room, our living room felt like I was back teaching pre-school all day, every day.  (I loved teaching, but I want our home to feel like a home, not a school)  I also found that my 3-year old’s attention span to each toy was growing smaller and smaller the more toys he had access to.

2.  Gather your supplies.
We purchased 5 tubs to create 5 themed toy areas.  Only one tub of toys will be in the living room each day.  The remaining four will be in our basement.  We chose 5 because we knew there would be days that toys were not as much needed, since we would be out and about.  We purchased tubs large enough to fit the bigger toys, but not too big because we didn’t want too many toys out each day.  Remember, it’s all about less.

3.  Let the kids help to de-clutter.
After we set out all the bins, we evaluated whether each of our kids played with that specific toy.  We were able to take a number of toys and put them in a place to be donated.  The boys were able to be a part of this, which is so important to the process.  I like that they can decide whether to keep the toy, or donate the toy.  But most importantly, it’s important at that age to have them be a part of the giving. 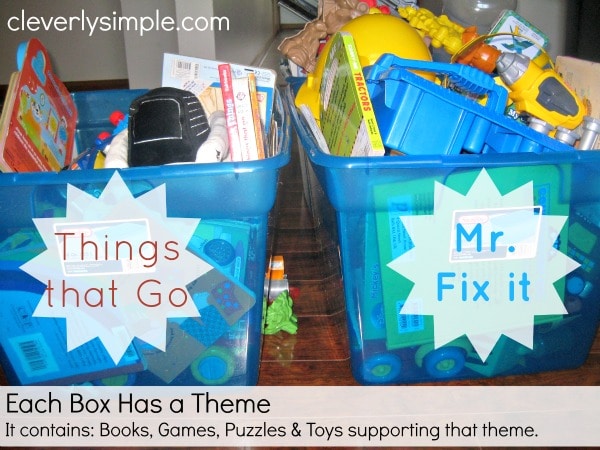 4.  Let the kids help to organize and create a theme for each bin.
It was also important to us that the boys help us to organize the toys.  We placed a big toy like the castle, fire station, etc. into each plastic bin and then helped them to sort the remaining books and smaller toys.  They were excited to be a part of the process.  Don’t worry about the themes, as they will naturally happen.  Our themes include, Mr. Fix It which includes a gardening set for kids, construction worker outfit, his tools, his barn and books relating to farming and construction vehicles.  (You may wonder what construction and farming have to do with each other.  Being in a family of farmers, I know that farmers fix things ALOT.)

5.  Use the system.
Once each theme was in each bin, we were able to place four bins in the basement.  The only remaining toys in our living room were contained in one bin and the train set.  (We decided to leave the train set upstairs everyday because my son does play with it, every. single. day.)  And we’re not worrying about the bin itself being organized.  Part of the process is the kids helping.  Stacking the books in order, is less on my priority list, than my kids actually picking up the toys themselves.

The best part of this entire process has been the increase in my 3-year old’s attention span.  The one bin of toys is exciting to him each day, because the toys it includes are “new”.  The best thing for the parents, is that clean up takes 1/5 of the time!  At night after the boys are in bed, we take the bin downstairs to the basement, and bring the new bin upstairs.  Easy!  We rotate in order the themed bins and start over when we reach the fifth one. 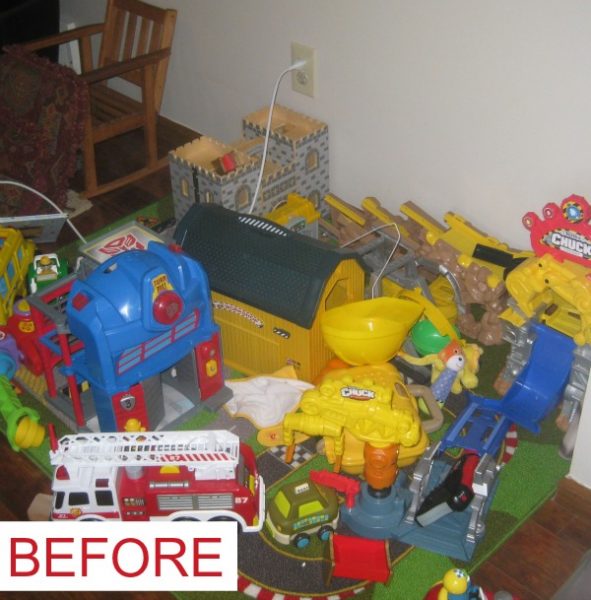 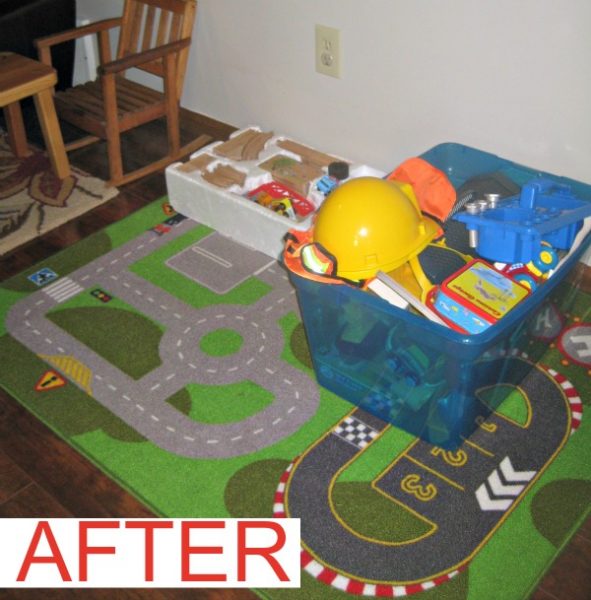 What tips do you have to conquering the toy mountain?