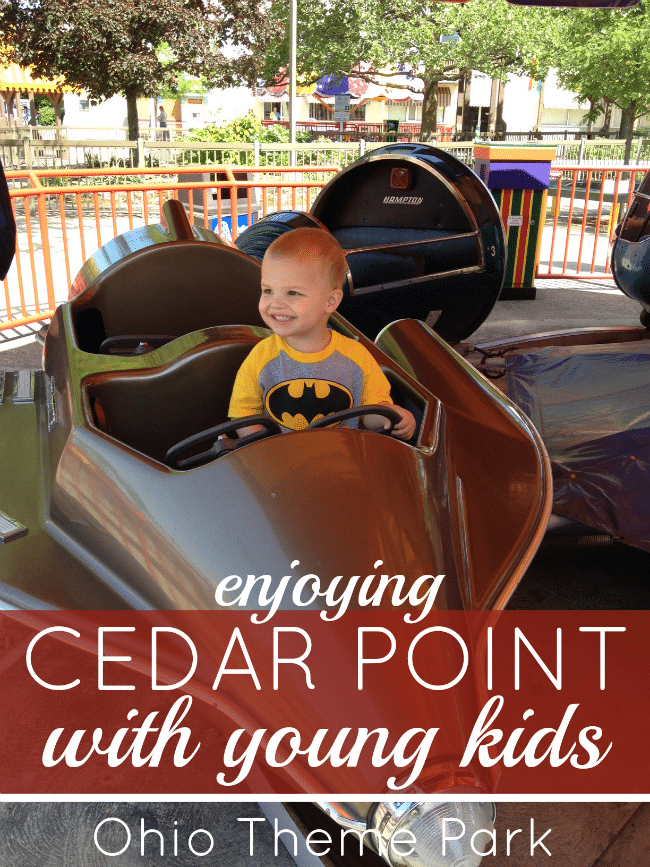 A few weeks ago my family and I visited Cedar Point in Sandusky, Ohio.  I was provided free tickets so that I could check out what they had for kids and share it with you!  I’ll be honest, the last time I remember riding rides at Cedar Point I was in high school.  The thought that there was enough for young kids (mine are aged four and two) was a bit surprising.

There is a TON to do with young kids!  We had so much fun.  The kids had such joy on their faces and we thoroughly enjoyed watching them.   My how my life has changed since my high school field trip days to this Ohio theme park.  One thing hasn’t changed though, the people watching is still superb.  Anyone? 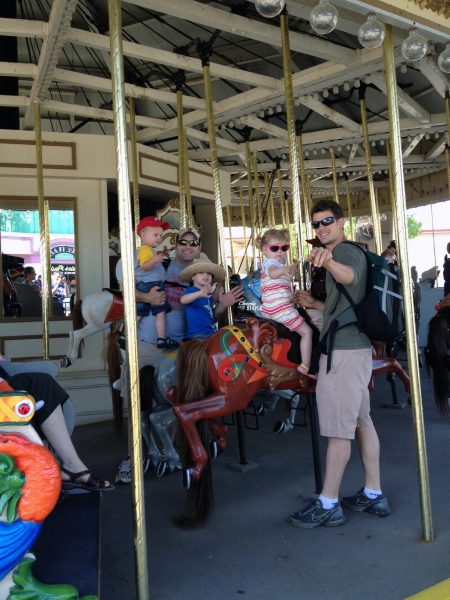 The first place we stopped at inside Cedar Point was the carrousel.  The kids were so excited.  They literally thought that was the best ride ever.  Little did they know the day ahead of them.  Besides my husband and two kids, my sister and her husband as well as her two girls came with us.  You know my sister as she writes and shares recipes here on Cleverly Simple every week or so.  She shares great recipes like the one here and here.  She does an awesome job helping me out, so I was excited to spend the day with her and her family.   They live close to Cedar Point so this was a real treat! 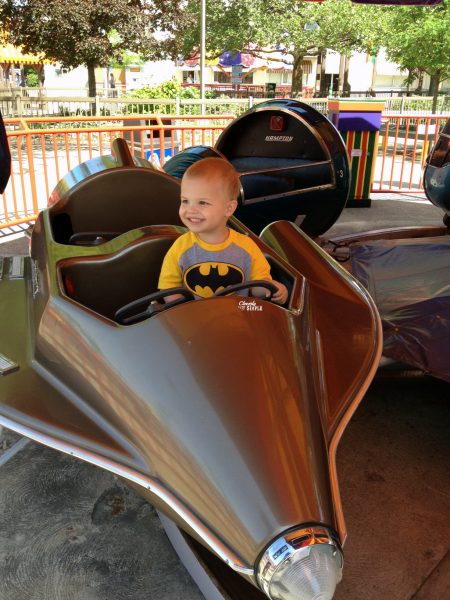 Just look at that face! Before we arrived at Cedar Point that morning, we checked the ride specifications.  There are so many for young kids like my two year old.   He really felt like a big kid!  If you’re headed to Cedar Point this year, I recommend checking out the website for all the rides.  It really helped us to strategize what we could do with the kids. 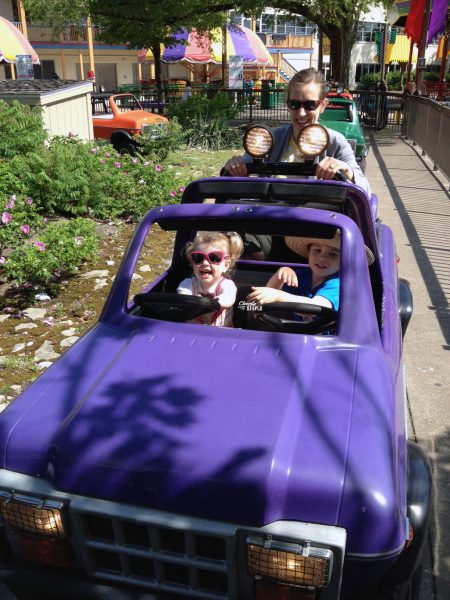 My sister was a huge sport on this one.  My four year old and his cousin really thought they were driving it.  We found quite a few great rides in Kiddy Kingdom.  It took us a good 90 minutes to conquer them all with the kids.  That includes a few times where we rode a ride more than once of course.

After Kiddy Kingdom, we enjoyed Planet Snoopy and then we headed to lunch.  Planet Snoopy was a bit smaller and so it didn’t take us too long to ride all the rides there with the kids.  After this, the kids were hungry.  There were plenty of options.  We chose to eat at The Coasters Drive In since it’s close to Planet Snoopy.  The kids loved the chicken tenders.  There was no milk available at that location, as an FYI.  The kids did love the lemonade, though.  At Cedar Point you can’t bring food in (unless it’s for a dietary need).  We did however bring bottled water to make sure we stayed hydrated.

As a side note, the back of the park has a Chick-fil-a!  We were too far and the kids were too hungry to venture that far into the park by mid-day. However, the next time we might start in the back so that we can have lunch there.  🙂 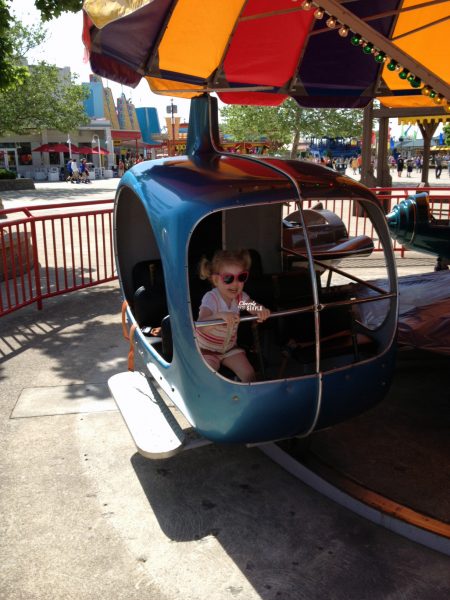 Here’s another ride.  I just love the joy on the kid’s face.  I think this was the ride where my niece sang the Little Einsteins song the entire ride!  After lunch we ventured to the railroad.  It’s a great ride to get you to the far end of the park.  We, however, had strollers with us and so we rode it around the entire route just for fun.

While we were walking there my sister was able to go to the family center to nurse my littlest of nieces who is 6 months old.  She mentioned that it was very nice.  I am really impressed that they have a place for moms to nurse and take care of the baby.  She mentioned that there was a microwave there as well as bottle warmers.  Way to go Cedar Point! 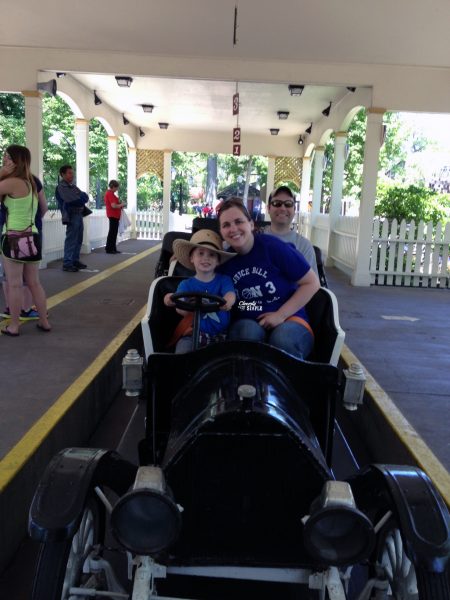 If you do one thing, make sure you ride the antique cars.  I vividly remember driving these when I was younger and thinking that I was soooo cool to be able to drive!  Well, my four year old was just as excited.  I’m pretty sure we would have hit a tree if not for the rail that guides the car.  But, he didn’t notice.  “I’m a great driver, mom!”.  Um, yes.  Sort of. 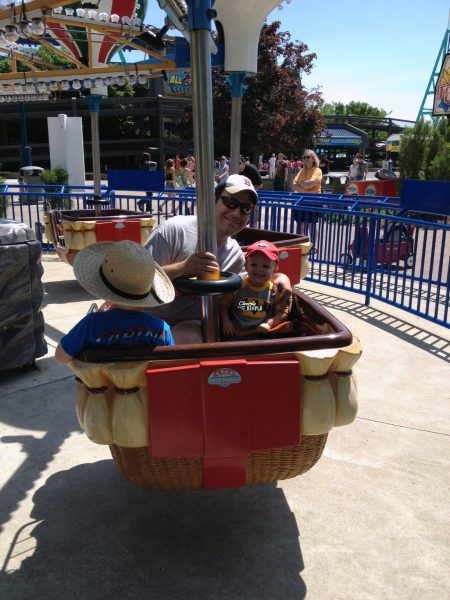 Here’s more rides.  I liked the mix of family rides with kid rides.  Kudos to my husband who rode all the spinny rides that would have left me dizzy and sick.

We spent the afternoon at Camp Snoopy.  There is a roller coaster there for kids that is fantastic!  The kids rode it three times!  You do have to ride it with them, but I don’t think anyone minded.  One thing at Cedar Point that you’ll want to take notice of is that they allow for Parent Swap.

Here’s how it works: one parent waits in line to a coaster or other height-restricted ride. After riding, they give their Parent Swap pass to the ride operator, and the other parent/guardian, who’s been taking care of the little ones, can walk up the exit to get right on the ride.To participate in Parent Swap, parents need to obtain a slip to authorize them for the program at one of the following locations: Guest Services (at the main gate); Park Operations Office; Town Hall Museum; Resort Entrance Gate (near Magnum).

We had enough people with us that we didn’t need the parent swap, but it’s a great idea if you’re there alone with the kids! 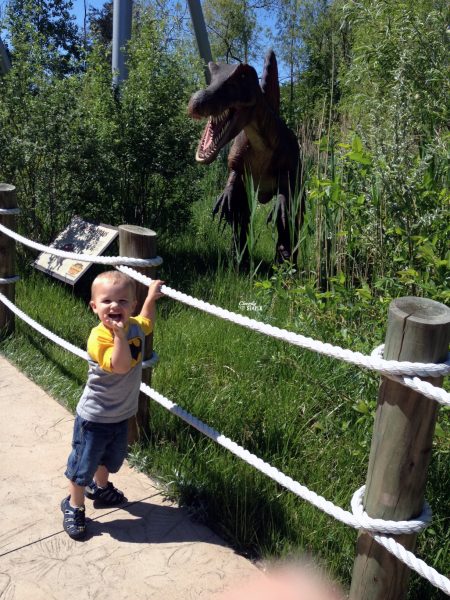 One of the last things we did was take the kids to Dinosaur Alive.  It was $9 for the four of us to go.  I think the little one pictured above was free.  We received a discount somehow as well.  Anyways, the kids LOVED it.  We have the dinosaurs at the Columbus Zoo so I wasn’t sure if it was something we wanted to spend extra money on.  However, I’m so glad we did.  It was fantastic.  Definitely worth the money if you have two dinosaur loving boys like I do.  At the end of the Dinosaur Alive walk, they have a huge sand pit filled with a giant fossils that the kids can uncover.  We probably spent over 30 minutes there.  Partly because the kids were obsessed with finding more fossils and partly because we, as parents got to sit down and relax!  🙂 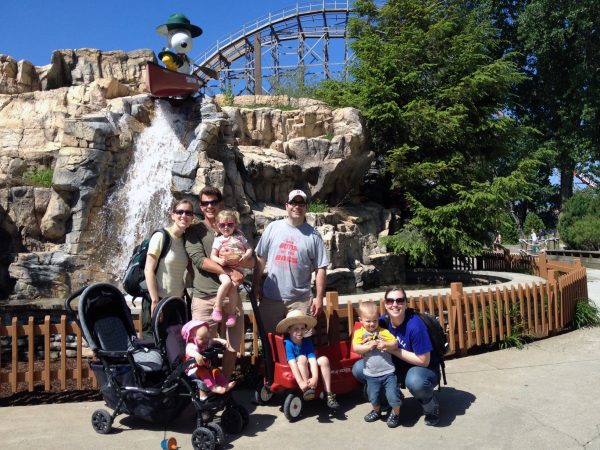 Here’s the whole group!  We had the best time.  Seriously, I wondered what Cedar Point would look like with four kids four and under.  It was fantastic. There is plenty to do and unlimited rides for the kids.

The best part, the naps!  The kids were OUT minutes after leaving.  If you have a chance this summer head up to Cedar Point with the family!  It’s different with kids – it’s not non-stop roller coasters like when I was a teenager.  However, watching your kids have the time of their life, is worth every single minute!

I received tickets to Cedar Point in return for a review.  The opinions expressed here are 100% all mine.  You know I love a good day out with the family!