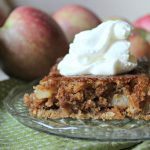 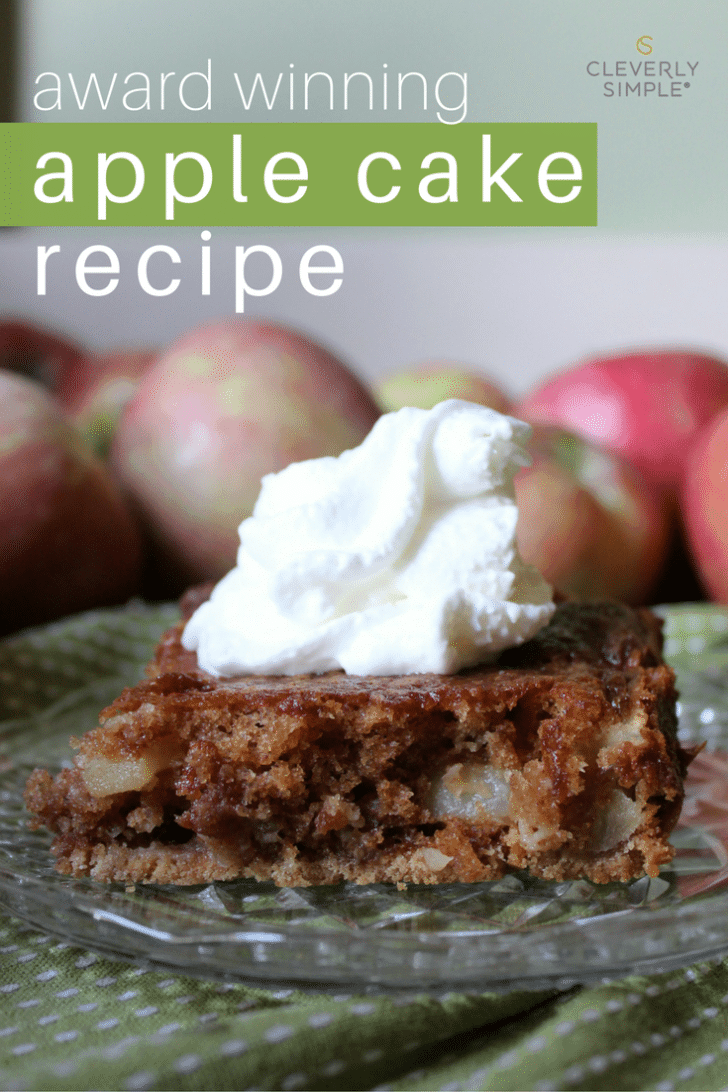 Apples.  What’s not to like?  They’re delicious and easy to eat.  You can bake with them, or throw them in your purse for an afternoon snack.  That’s why when I found this award winning easy apple cake recipe in my mom’s recipe book, I knew I had to try it.  It’s fall, y’all.  What better time of year to enjoy the bounty of apples available.  That being said, you can pretty much buy apples year around, but it’s nice to make a few fall recipes this time of year to enjoy the delicious fruit.

We had ventured to an apple orchard to pick our own apples which is what inspired me to make this dessert.  I could eat this for breakfast, but I think it’s technically a cake which makes it a dessert.  However, it’s not like your typical cake in that it has a crispy bottom layer that makes it unique.  I love texture in my food, and so I was excited to try this recipe and share it with you!

Like I said, this is a certified award winning recipe.  My mom had cut it out in the newspaper in the 70’s and glued it into one of her cookbooks.  They called it an apple square.  I call it cake.  It’s whatever you want it to be, as long as you make this and enjoy a bite!  (This recipe can be found on Pillsbury.com.) 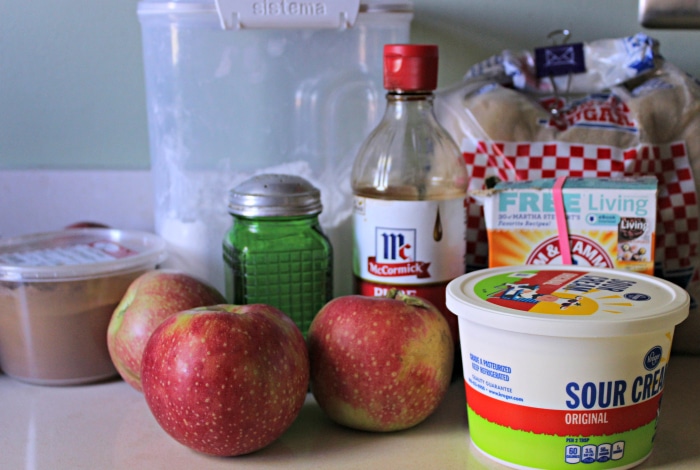 To make this apple cake you will need: 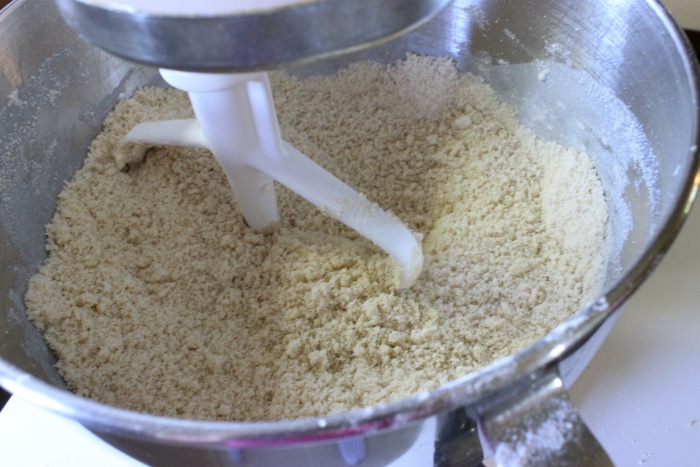 Before we get started, preheat your oven to 350 degrees Fahrenheit.  In a mixing bowl, combine the flour, brown sugar and margarine.  Mix at medium speed until crumbly like you see above.  Mix in the 1 cups of nuts.  I chose pecans. 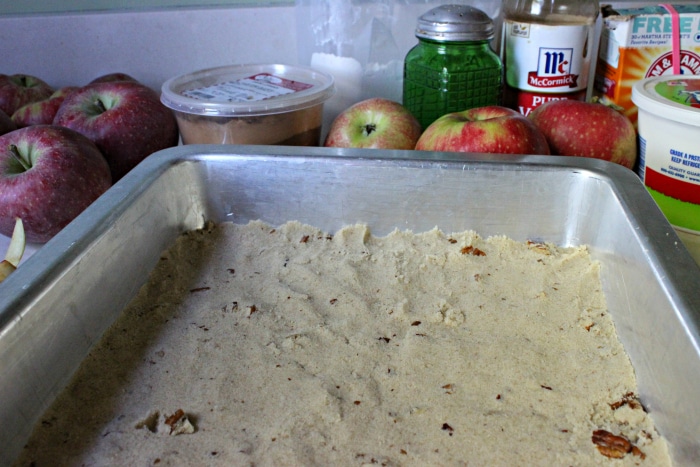 Let me stop you here.  I made this twice.  The first time with an airbake pan which I typically love to bake all things in.  However, this recipe did not do well with the airbake.  It just would not bake enough.  I re-did the recipe with a dark pan and it turned out so much better.  So, learn from me.  (However, the pictures are with a light pan since that’s when I took the pictures.) 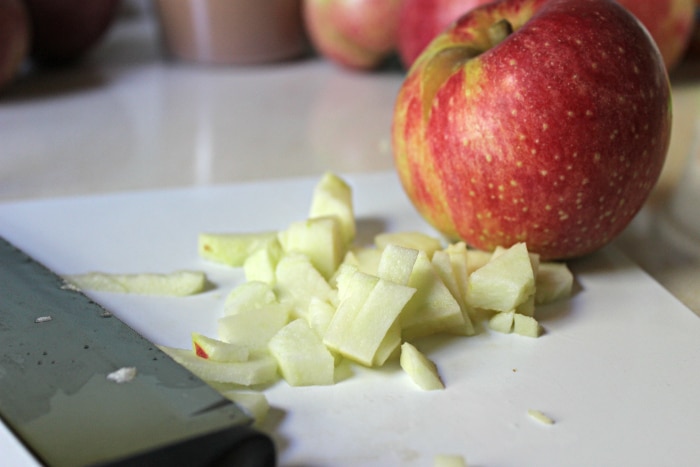 Finely chop up your apples.  This is what mine looked like. I like to taste the apple in my recipe but I also like it to be cooked through.  No crunchy apples in my recipes. 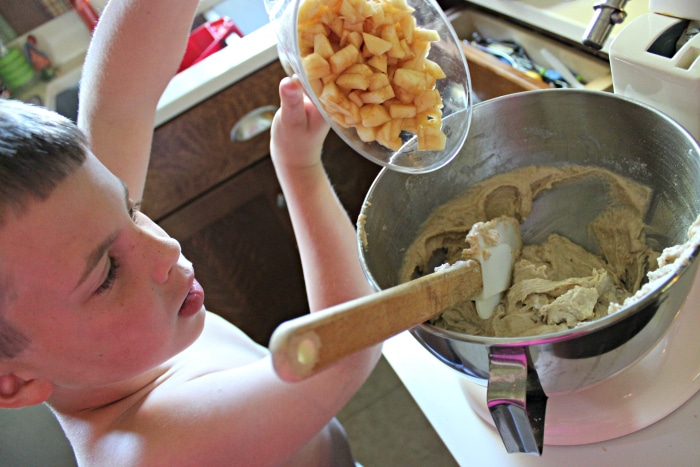 To the remaining mixture in your mixing bowl, add the remaining ingredients of cinnamon, baking soda, salt, sour cream, vanilla and egg.  Mix well.  Then stir in the apples.  Shirts not required. 🙂 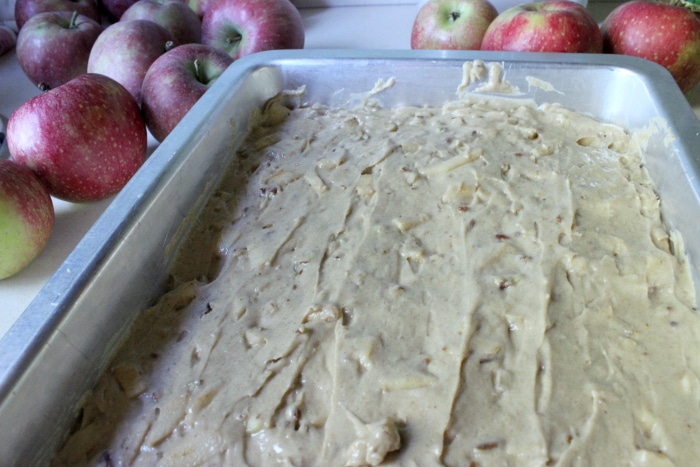 Spoon the mixture over your crumbly crust evenly.  I love a good recipe that is so efficient.  I don’t remember the last recipe where I made the crust and then used half of the crust mixture to make the remaining cake. 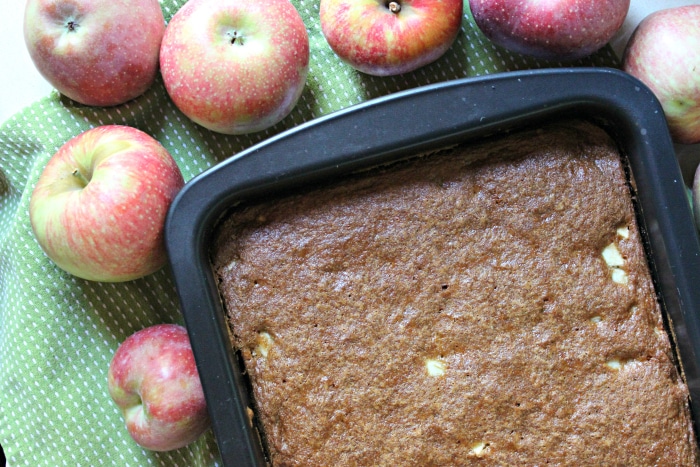 Bake at 350 degrees for 40 minutes.  Notice the dark pan.  While the first batch had a toothpick that was clean after 25 minutes, it was far from done.  So, you’l really need to watch this recipe.  Forty minutes was perfect for my oven but keep an eye on it. 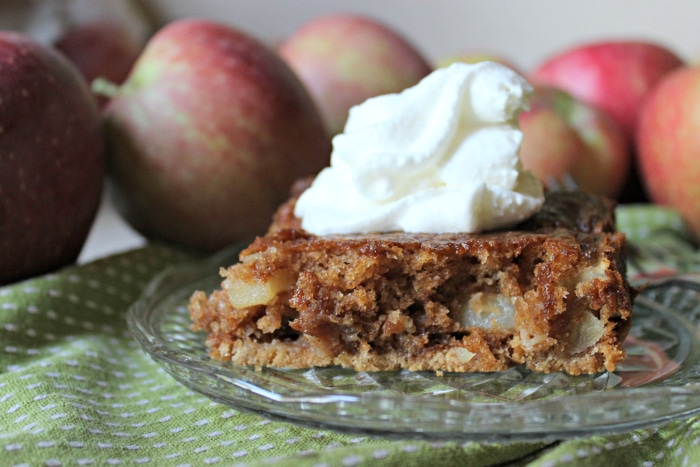 Cut the cake into squares and serve warm.  I actually, liked it a bit better when it was cool.  It was super sweet when it was warm but the apple flavor really came through after it had cooled for a good 30 minutes.  Top with whip cream and serve. 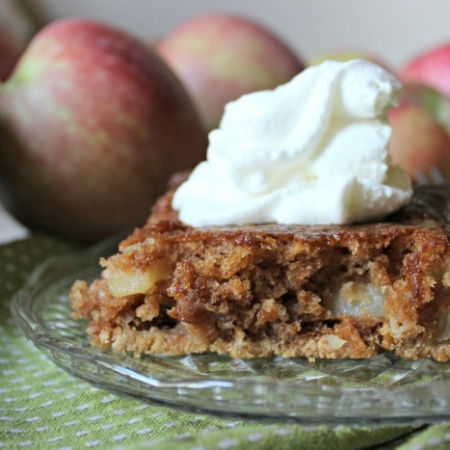