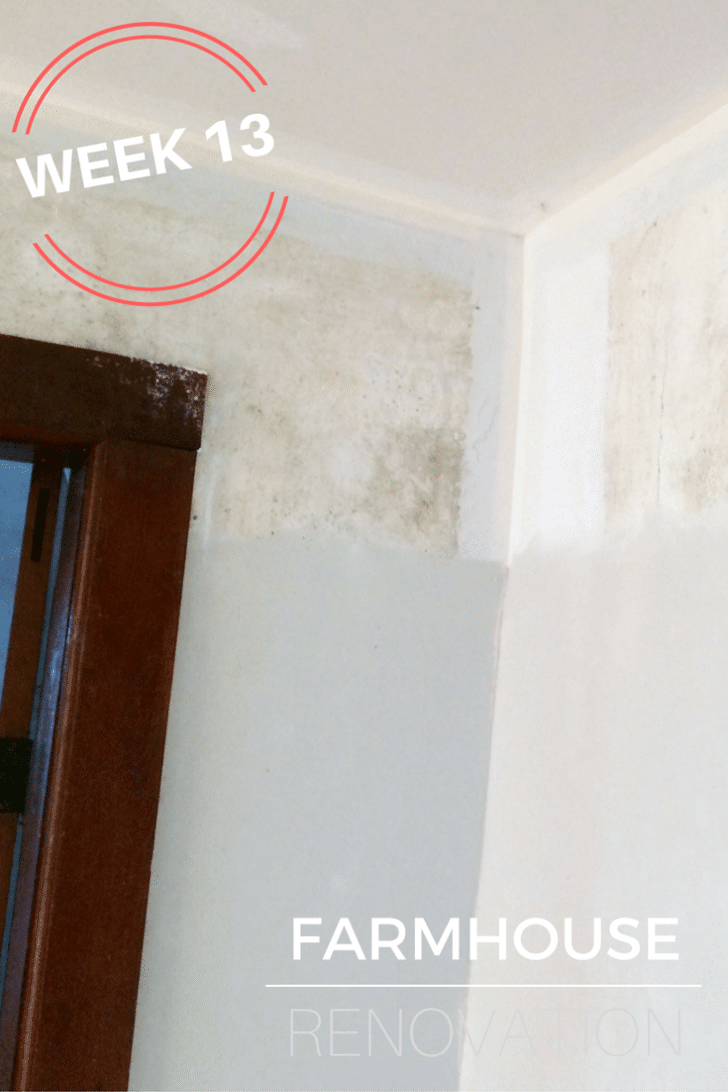 After last week’s excitement with the vaulted ceilings in the kitchen, this week felt a little boring.  However, it was not without dramatic changes to the house.  Everyday the three guys were hard at work and slowly but surely the house started to transform a little bit more each day. 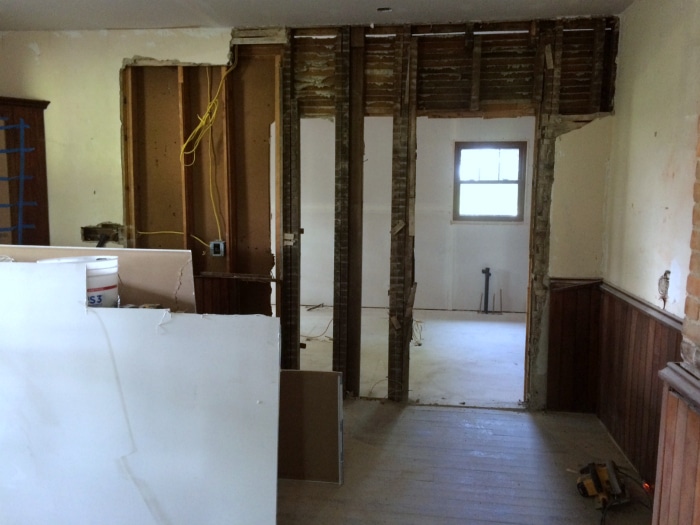 One of the big changes this week was opening up the entryway from the dining room to the kitchen.  I am not big on open concepts, especially in an old house.  Every time I watch HGTV and someone buys an old house with character and then takes out all the character by knocking down most of the walls, I want to cry and ask them why they bought an old house?!

I want this house to feel like an old farmhouse and old farmhouses have separate distinct areas to live in.  Most of the reasoning was for warmth in the winter, but my guess is that they didn’t want those who dropped in to call to see their entire house at once.  I have that same desire.  I am not a clean freak and I have two young boys.  Personally, I don’t like seeing my entire house at one glance.  I like to clean up a room and live in it’s glory forgetting what the rest of my house may look like.  Amen. 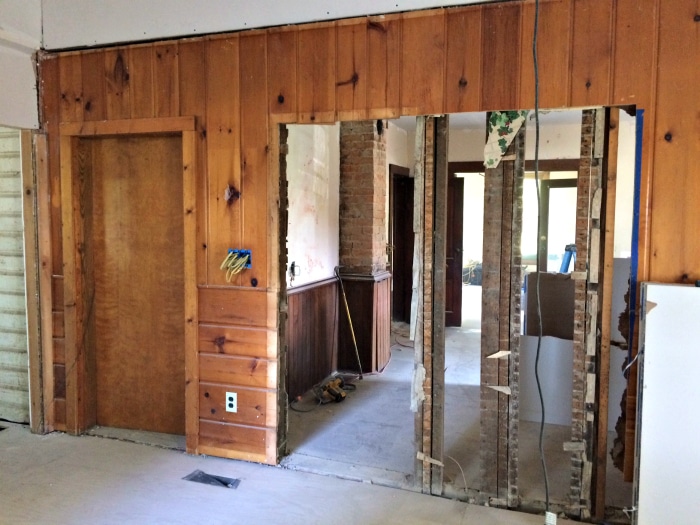 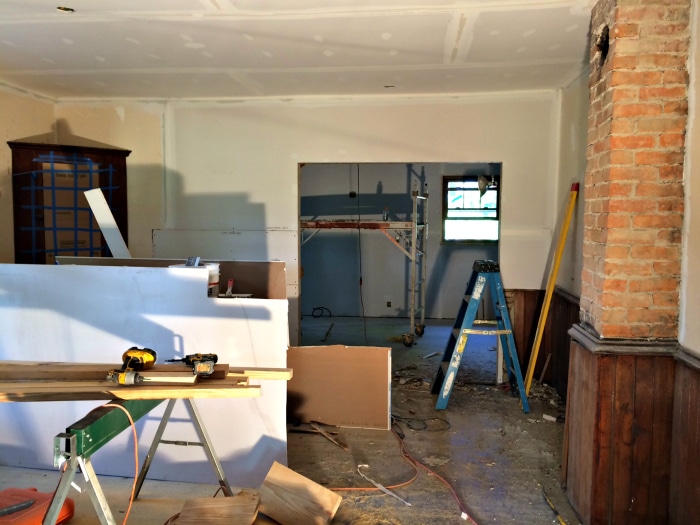 The opening to the kitchen from the dining room doubled the door size.  It’s roughly the same size as the other side of the room and will have trim to match.  It will look like it’s always been there. 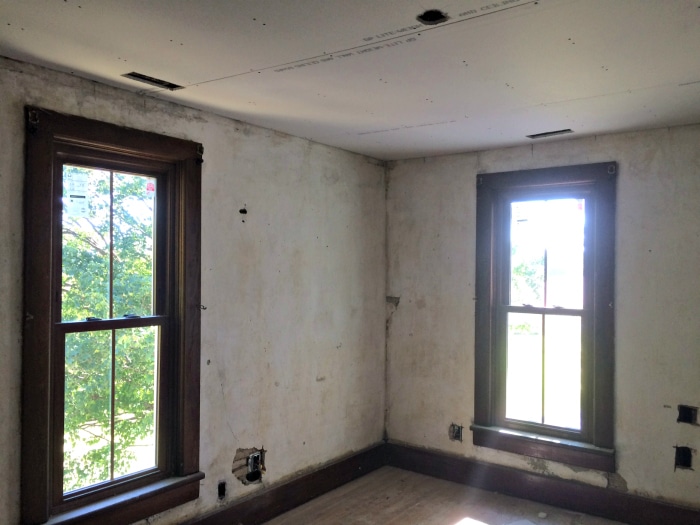 Probably the most time consuming part of the work this week was skimming the walls in every single room.  The entire house has plaster.  And I love it.  I like the imperfections.  I love the skill it took for someone way back when to make the walls look as they do.  However, there were lots of holes from the new electric and just wear.

Can we all just take a moment to admire the plaster without wallpaper.  It’s just pure beauty to me. 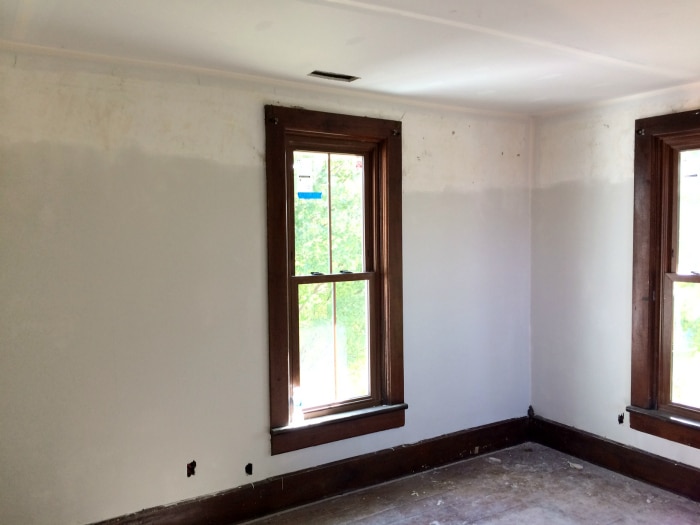 Originally we planned to just have the holes patched and some of the rough spots.  But after talking with the skilled worker who was going to do that, I could see he was having a hard time doing something halfway.  I personally love the imperfections and the dings, but long term I understood that it was probably best to put a good skim coat on to preserve the plaster for the next generation.  You can see above the difference.  The top had yet to be skim coated while the bottom ¾ of the room had been. 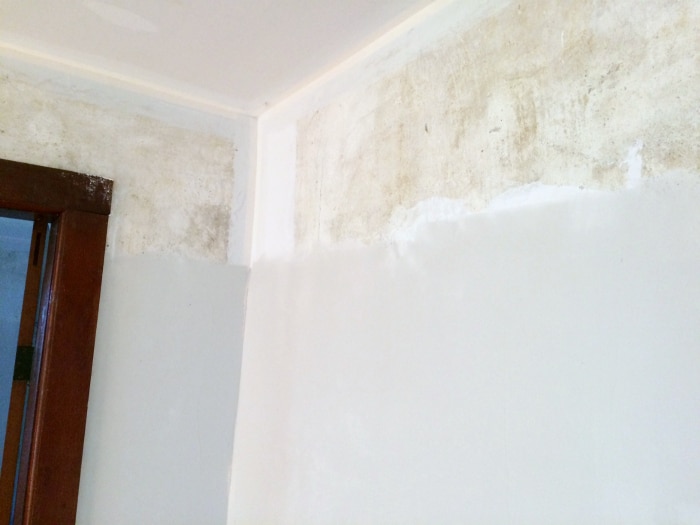 Here’s a close up view.  The skim coat is really making the wood “pop” as they say.  They’re doing a fantastic job.  The entire house took all week.  Next week they’ll start the second coat throughout the house.  I’m really glad they’re taking the time to do this and I really appreciate the guys who are working on the house who are looking out for us.  There’s so many times that they speak up to suggest something because they know how much we love this house and how much we want to do everything right the first time.  I am not doing this again. 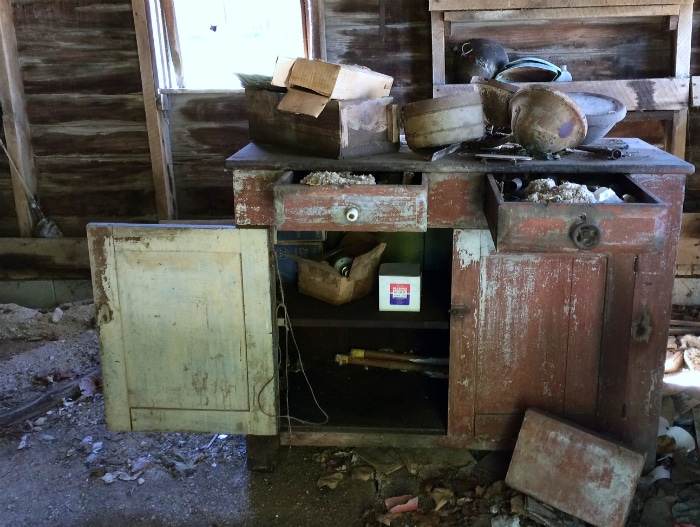 As for smaller projects, about a month ago I discovered this primitive like cabinet in the barn.  I fell in love with it and all it’s chippy paint.  My project this weekend was to totally restore it.  Like most things around the house, it’s going to take longer than that. 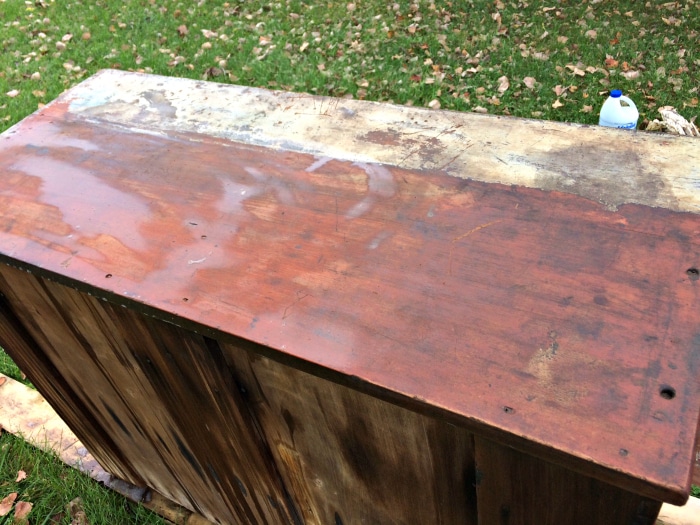 Right now I’ve got it outside and I’ve washed the top and two of the sides.  That took me two hours just to get all the gunk off the top.  I wanted to vacuum a lot of the dust, but didn’t have a vacuum that I wanted to sacrifice.  I’m not sure I would want to use it again after vacuuming what I found in this thing.  Once I get it cleaned up I’ll decide whether to paint it or just leave it natural.  I’m learning towards natural, but we’ll see how the rest of it goes. 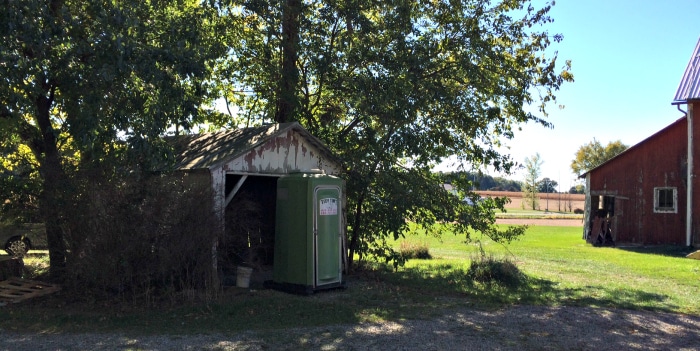 This time next week the smaller 3 barns will be taken down.  The bank through which we have our renovation loan requires it.  They’re not in great shape.  They’re made with nice chippy painted wood and so someone offered to take them down for us for free in return for keeping the wood.

One thing I’ve loved about doing this house is the people we have met.  One of the roofers hauled off all our scrap metal in return for being able to turn it in for money for himself.  Now, someone wants to invest days of work to tear down the smaller barns in return for selling the wood for himself.  I’m happy to see it will be used but I’m more in awe of the hard work some do to scratch out a living.  I have such respect for that.  We moved from one of the wealthiest counties in Ohio to one of the most poor.  The county we’ve moved to is in hard economic times with many of the factories having moved, and we’ve gotten to work along such hard working men who find pride in their workmanship and the hard work that they do.  I really like the people, their honesty and their work ethic.  It’s a great thing for my boys to grow up around.

All in all it was a busy week this week.  Harvest continued for my brother which makes it a busy time for everyone.  He finished up Friday and we went to the circus to celebrate.

This week we hope to accomplish: