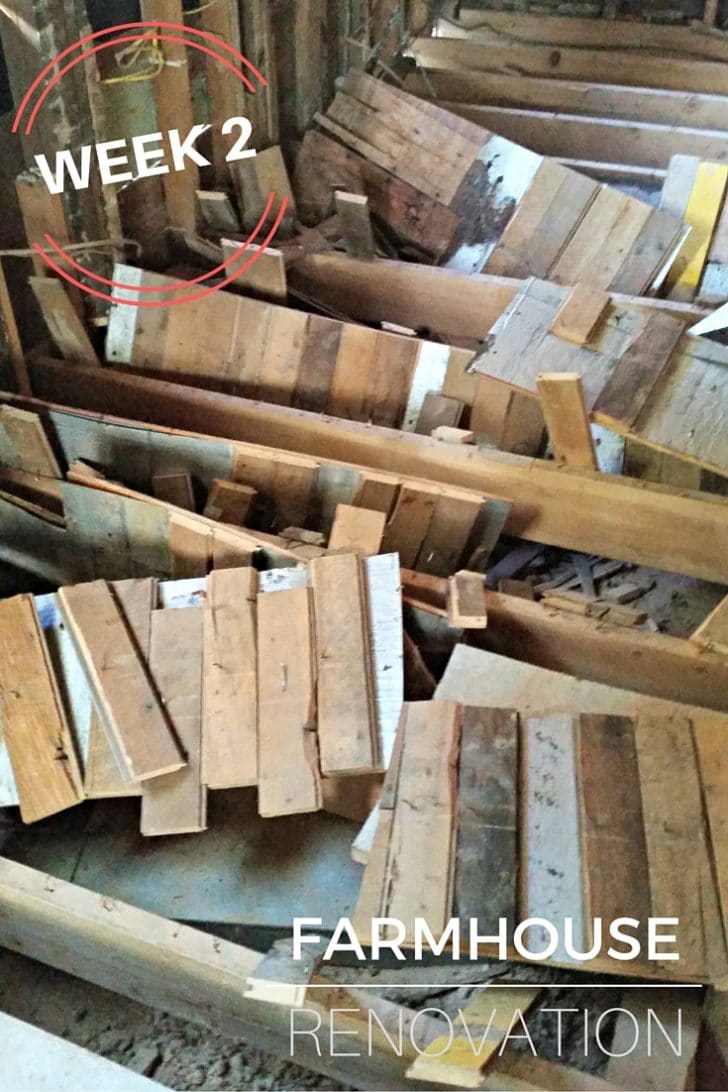 I don’t know where to start today.  I’m somewhere between excited and exhausted.  We’ve spent the last week up at the farmhouse, all day everyday.  Our main goal this past week was to get rid of everything in the house we had to have cleared up before the contractor starts to take over.  We’re trying to save money by demoing as much as we can.   And as you’ll soon see, everything that my ancestors put into this house – they put in to last. That means it took brute strength and ingenuity to demo this past week.  I’d like to say that it was my brute strength, but it was not.  My brother’s smartest move was hiring a few high school students this summer to work on his farm.  And they’ve been helping us with all the dirty work, literally. 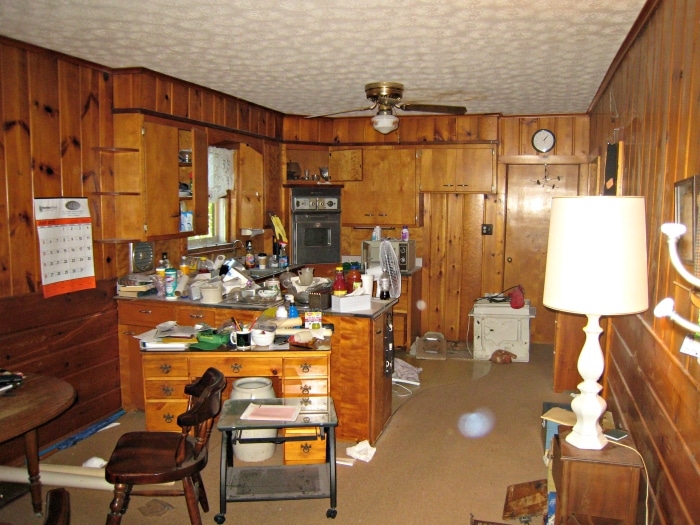 Let’s start with the kitchen, shall we.  My grandma would be absolutely floored to see the kitchen in the state it was when we bought the home.  She kept a very clean home and over the last 10 years, my uncle had undone a lot of that.  The house was a mess on top of the fact it was not being cared for.  In an old home, if it’s not cared for things go down hill fast.

The kitchen was in the “new addition” of the house.  We thought that it was most likely added onto the home in the 1940’s.  But as we’ve found out, we had no idea about the home.  It’s amazing what you find out when you start removing the ceiling and the walls. 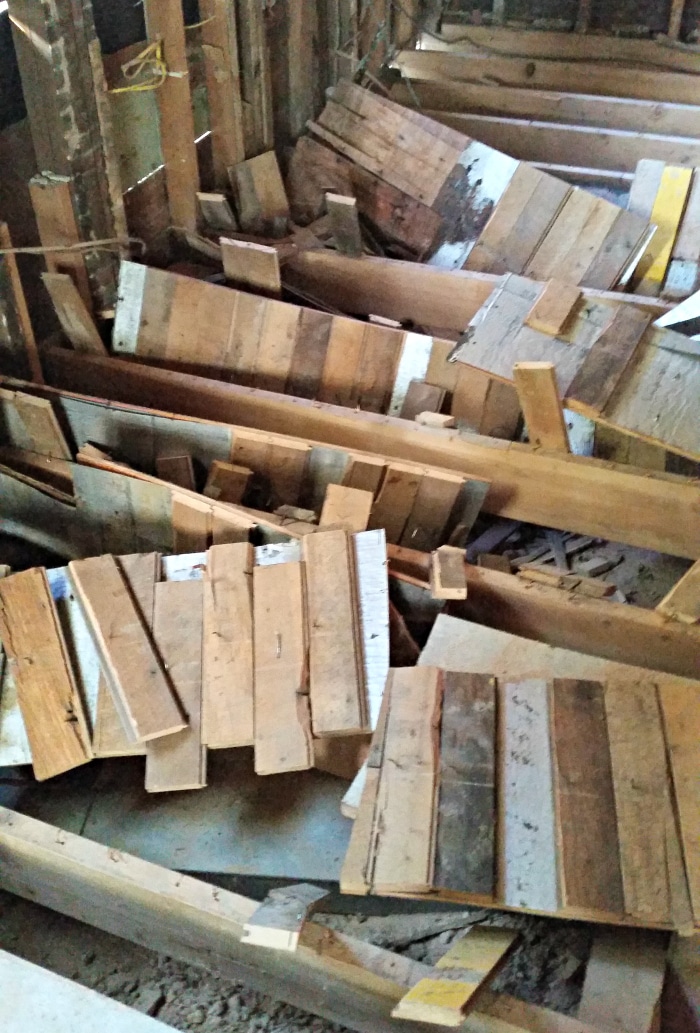 This is what the kitchen looked like after removing the ceiling and the floor.   There was not a crawl space underneath and so in order to put in the new HVAC, electric and plumbing, we had to remove the floor.  We didn’t know what would be under the carpeting.  We found out that it was old porch floor boards.  Yes, this “new addition” was probably the original porch on the back of the house.   That meant 2 inch thick oak porch boards and 1/2 inch plywood were glued on top of the floor joists.  They were a complete joy to remove.  It took us 2 hours to get through about 2 feet of the floor.  That’s when the ingenuity kicked in.  Work smarter.  We figured out a way to cut the floor at an exact width between the floor joists to then sledge hammer out each section.    That’s where the high school students come in.  I think they’re having fun with this project.  The rest of the kitchen took about 2 hours more to remove. 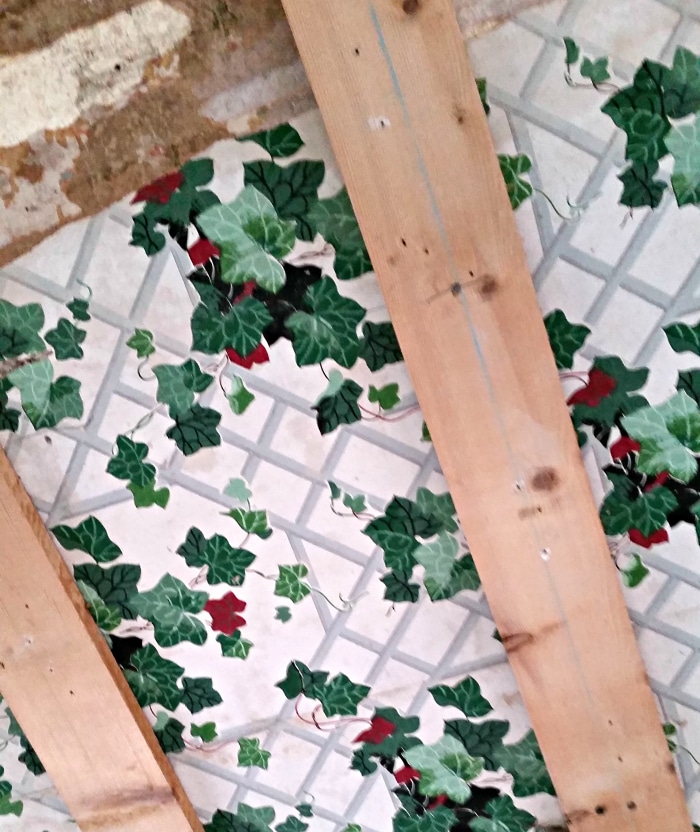 We also removed the ceiling so that it could be re-drywalled.  It was wallpapered underneath.  Why not?  The good news is, I do not have to remove this wallpaper.  I can totally see why they picked this pattern.  It looks like the top of a porch.

After removing the floor, we realized that the foundation was not good in a few places.  That means we’re probably going to reframe the “new addition.  It’s ironic to me that the worst part of the house is the newest part of the house.  The reframing sets us back a bit as we’re not able to order our cabinets until that’s done and we’ve laid the floor back down over the new HVAC, electric and plumbing.  The other sad news is that the paneling I wanted to repurpose had to be torn out.  Right now, I’ve been able to save one wall to use as an accent wall. 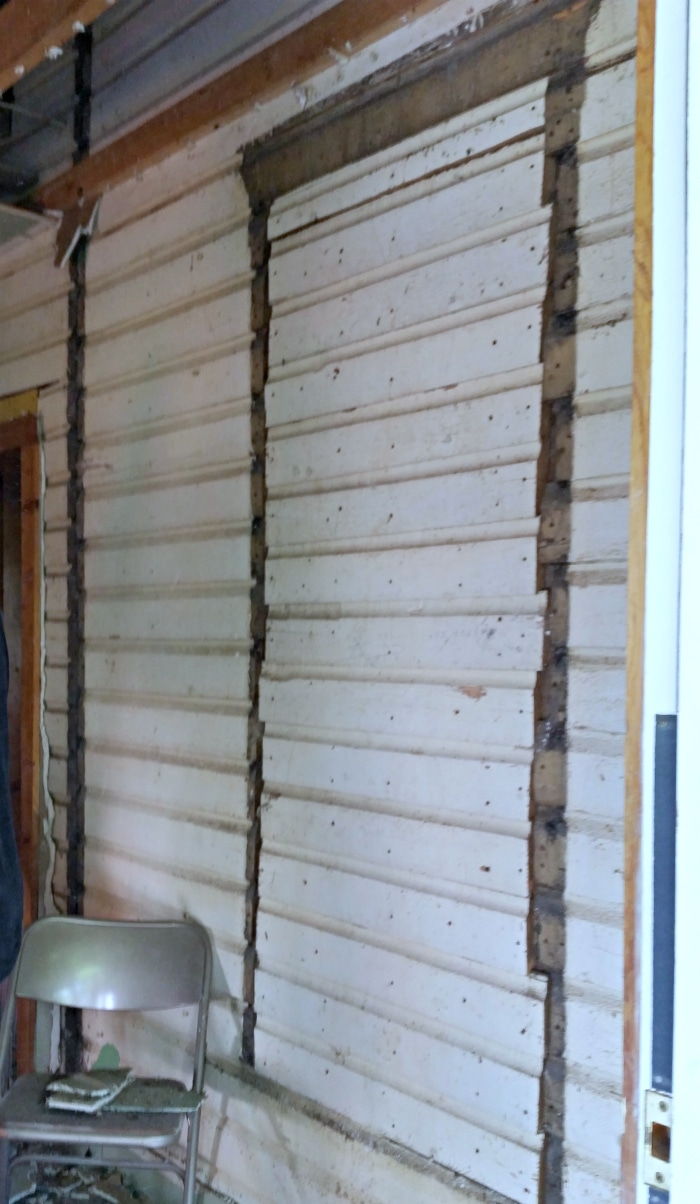 On the other side of the kitchen is the laundry area.  We discovered that it was not built when the porch was there.  It had siding underneath two of the walls.  And you can see where they had placed a window.  Our theory is that the back area was originally a porch, that became a closed in area of the house and then the laundry room was added onto later.  When all this happened, we don’t know.  Since the house was built in the mid-1800’s there’s no telling.  Oh, the questions I wish I could ask my great-grandmother. 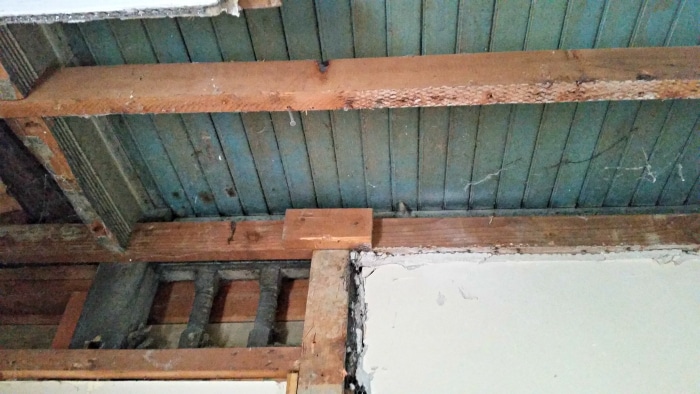 We also demo’d the bathroom this week.  The shower area was solid concrete from floor to ceiling.  This is where the jackhammer came in.  Our coolest discovery was the old porch ceiling and details underneath the wall and ceiling.  Since the home was built without a bathroom, a porch was converted to the bathroom in the mid-1900’s.  My grandmother would not move into the house, until she had a bathroom – and didn’t have to use the outhouse.  I don’t blame her.  It’s so neat to see the color on the porch ceiling.   I love it!  I wish I could save the ceiling, but for some reason they extended the bathroom walls outside of where the porch was. 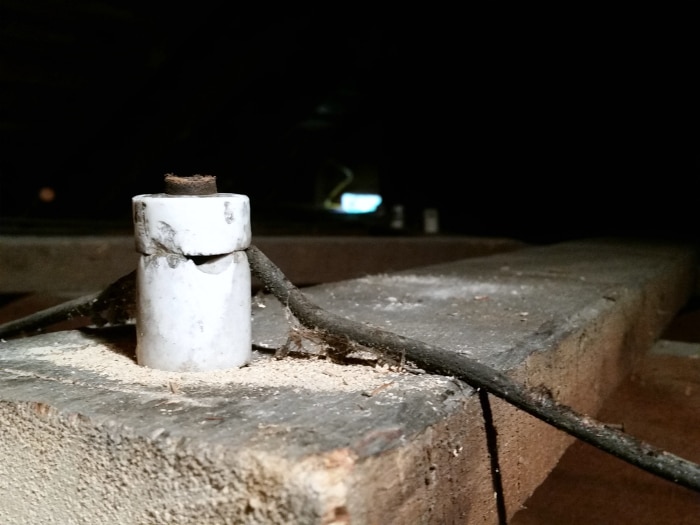 Our final project we tackled yesterday was the attic.  The door to the attic could fit an eight year old through it, and that’s about it.  We are opening that up to put in a dropdown stairway like this one.  Think National Lampoon’s Christmas Vacation.  🙂  In the attic we’re laying plywood so that we can use it for storage someday.  As hot as it was up there, I did sneak up to show you the electric.  It’s still the old knob and tube.  Isn’t that crazy?   We’re using it until the new electric is done. 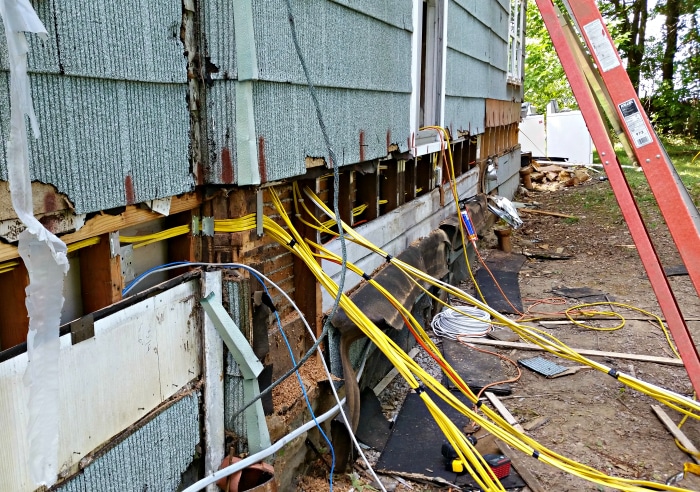 Speaking of electric, this is what it looked like outside of our home this week.  I’m glad the electrician knows what he is doing.  It looked like wire chaos to me!  We’re saving money by allowing him to cut out the sides of the house and wire it from the outside.  It makes it so much easier for him and cuts down on the labor cost.  We’re sealing it back up with plywood and then the new siding and insulation will go over that so you’ll never know.  There is not one stitch of insulation in the home.  My grandma always had it 80 degrees in there, she was spending a fortune on heating oil.  I’m glad she was comfy, though. 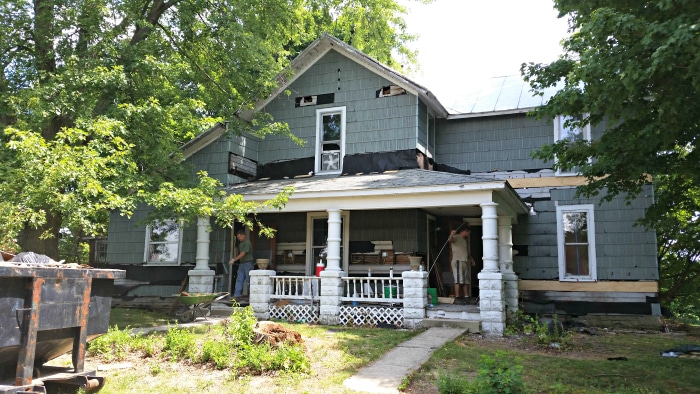 There she is.  It’s helpful to me to do these updates to see how far we’ve come.  Here’s a few things we’ve accomplished the last few weeks:

This week we’re looking forward to the insulation being blown into the walls.  The windows and siding may be started this week too.

Have a great week!