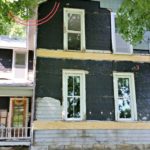 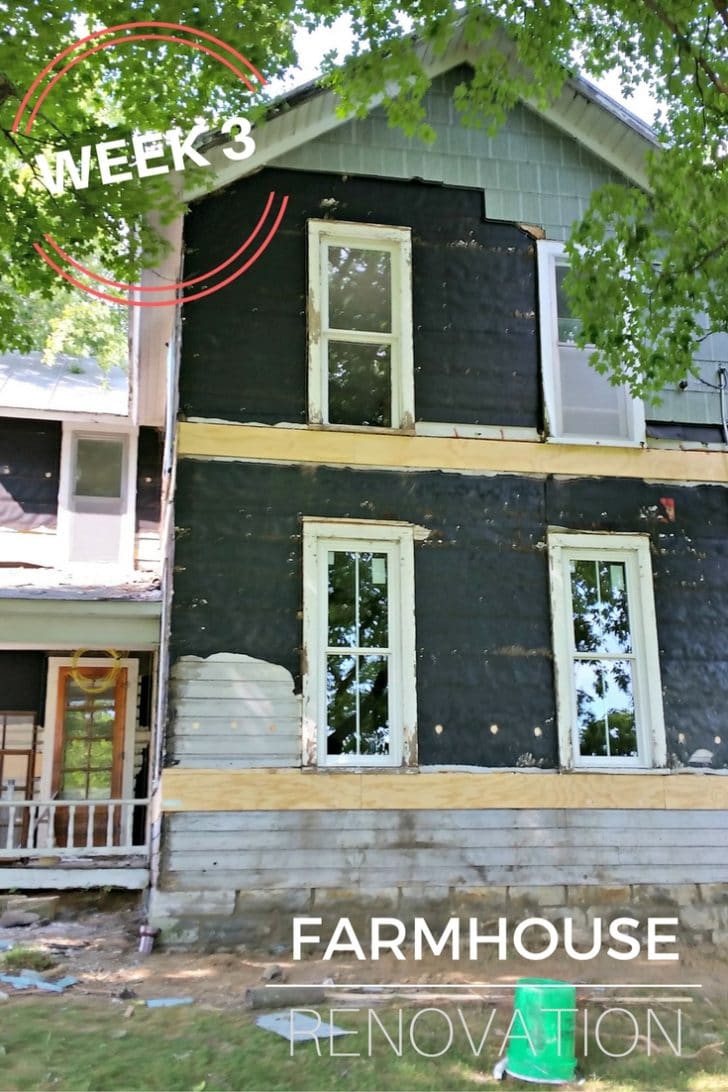 This week was a good mix of the new and the old.  The recent and the antique.  The modernistic and the vintage.  I spent most of my days up at the farmhouse but did spend one day touring the BIA Parade of Homes in Powell, Ohio.  (Scroll down to enter the giveaway if you live in the Columbus area!)  It was the first time that we’ve started the process of putting things back into the home. Up until this week we were just tearing out or cleaning out.

Monday started with the new windows arriving!  I really wanted to save the old windows.  Everything in my preservationist body loved the idea of restoring the windows so that we could continue to enjoy the wavy glass.  Unfortunately, after years of leaky rain, they were not in great shape.  We could have painfully restored them one by one but I’m not in my early 20’s without kids and plenty of time to do that.  Reality sometimes trumps my desire to keep every single thing that’s original in the home.  I have to keep reminding myself, that we’re saving the house, and it’s okay to let a few things go. 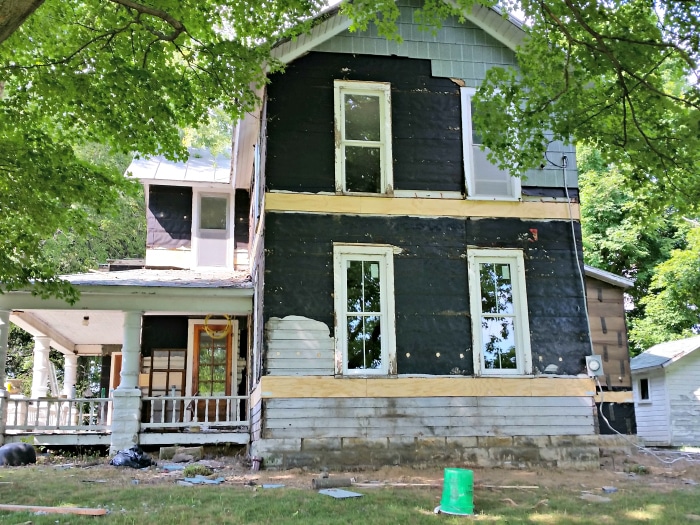 You can see the difference in the new vs old windows above.  The first floor had all the windows replaced. Unfortunately, the upstairs windows arrived in the wrong size.  They are three inches shorter than the downstairs windows and the manufacturer made a goof by making them all the same size.  That was a big bummer, because it’s delayed us a bit.  At the same time, it made for a great photo op to see the difference.  I ordered double hung windows just like the originals but added the line through the middle.  It matches the period of the home, even though the original windows never had that line.

The inside of the windows are a wood print to match the woodwork.  I was giddy about how well the wood trim matched our original wood trim.  When you take a step back you can’t even tell.  Getting white or almond windows would have been cheaper, but I’m throwing cost out the window (pun intended!) when it comes to keeping things looking as original as possible.  Yes, that means I am not painting any of the original woodwork white.  I feel like that would be a sin.  Literally.

Also this week the front foundation was tuck pointed. Above is a picture of it before.  The solid limestone rocks had not moved, but they needed some support. 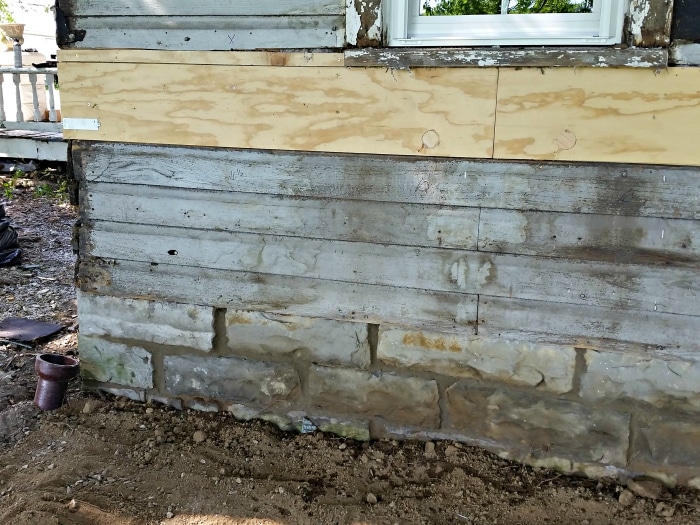 Here’s a picture of the “after”.  This was just after it was done so the cement mixture was a bit dark still.  This project was probably the first one that my family could have done ourselves (family meaning, my dad or brother) and we paid someone to do it.  It’s hard for us to do that as “do it yourselfers” but we don’t have 10 years to get this house done and hiring someone to do a lot of the bigger jobs just makes sense. 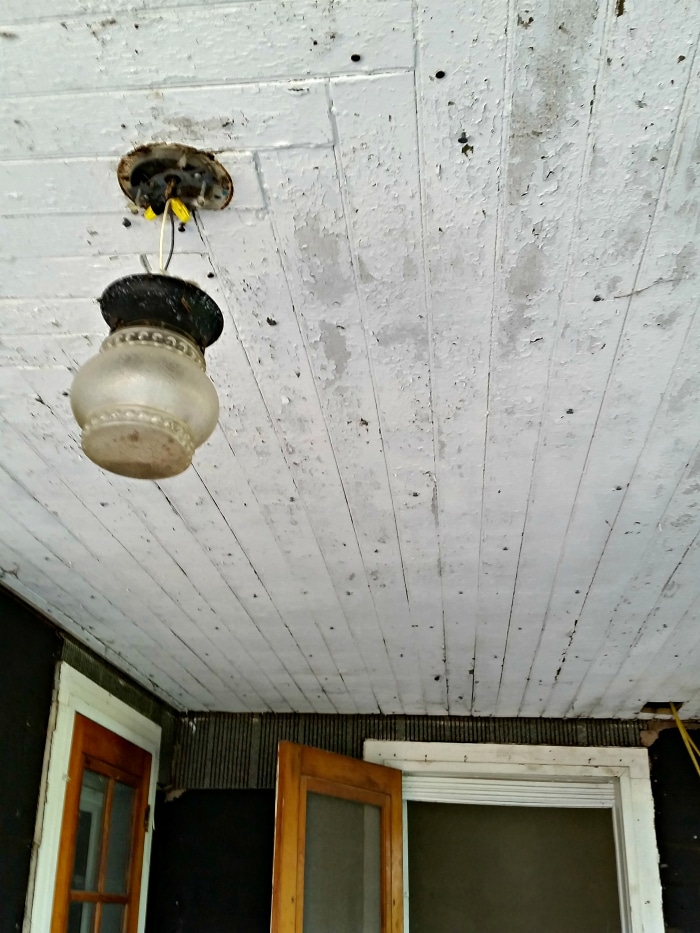 On the outside porch we decided to rip down the vinyl bead board and expose the original.  It’s going to be covered again with new bead board that looks more like real bead board.  What my grandma installed years ago didn’t look quite right.  This again is where I have a war within myself about keeping the original vs getting something that looks original.  Really, I just don’t want to paint it.  Going into an old house I know we’ll have projects every year and we’re trying to be strategic about what projects we want to prioritize and which ones we want to make sure we don’t have to worry about.

One of the other bigger projects this week was having insulation blown into the walls.  There was none.  My ancestors had the siding and the plaster and lath separating them from the elements in the winter with only a stove to keep them warm.  The insulation guys had a hard time getting their holes into the siding because it was sooo thick. 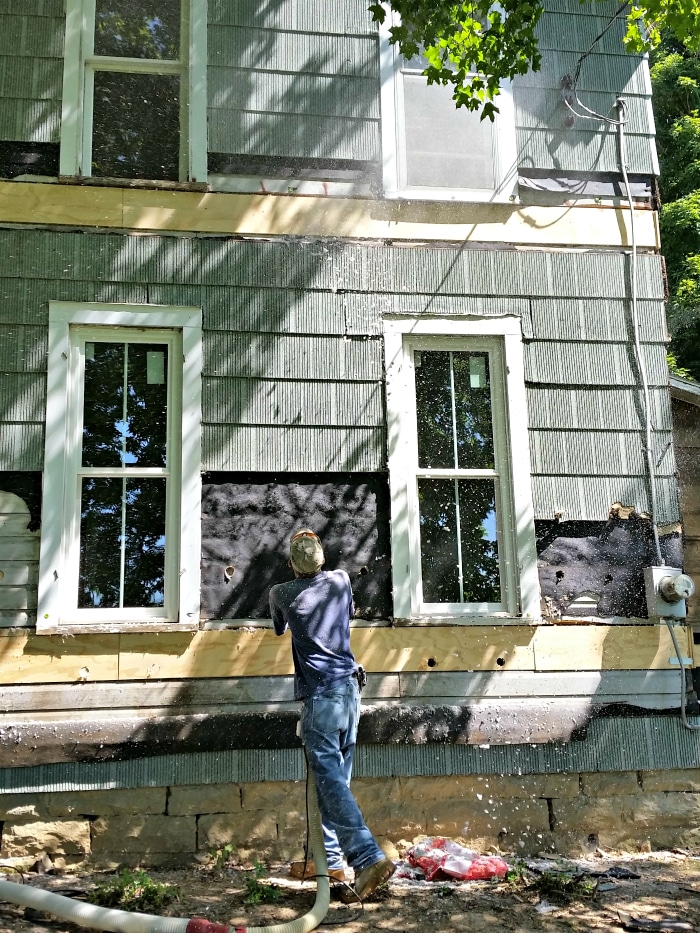 They had a long tube that they jammed into the holes that then filled the cavity between the studs with insulation.  It really pumped it high into the house.  You can see it raining down a bit before it sealed itself from an opening that was made by the electric being installed from the outside.  They are coming back next week to finish up after the top floor windows are in.  They will do the same thing from the top of the house. 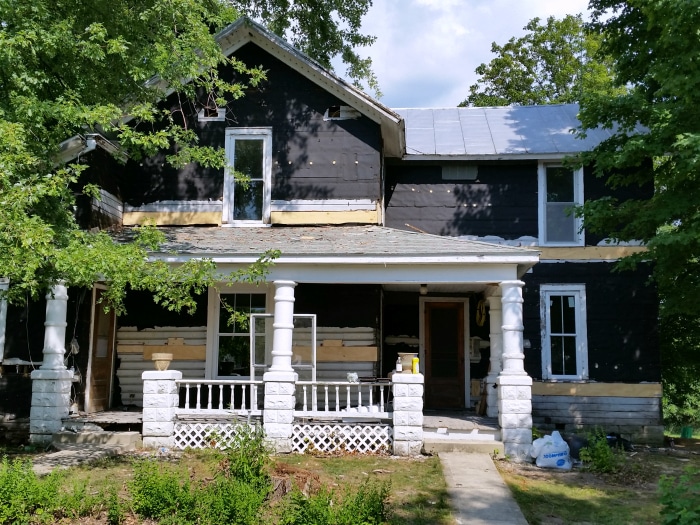 And lastly, all of the old-newer siding was taken off in preparation for the new next week.  They left the tar paper on and will put fan fold over that before putting the new vinyl siding on.  Part of me wished that they had taken off the tar paper so the house could be seen one more time with the original siding.  But that’s again, my sappy self.

It’s a bit emotional as we take off some of the things I know my grandma chose for the house.  But I know she would be so incredibly excited to see me and my boys living there.  I can still see her waving to me from the front porch every time I left from a visit.  She always came out to wave us off as went down the long lane. 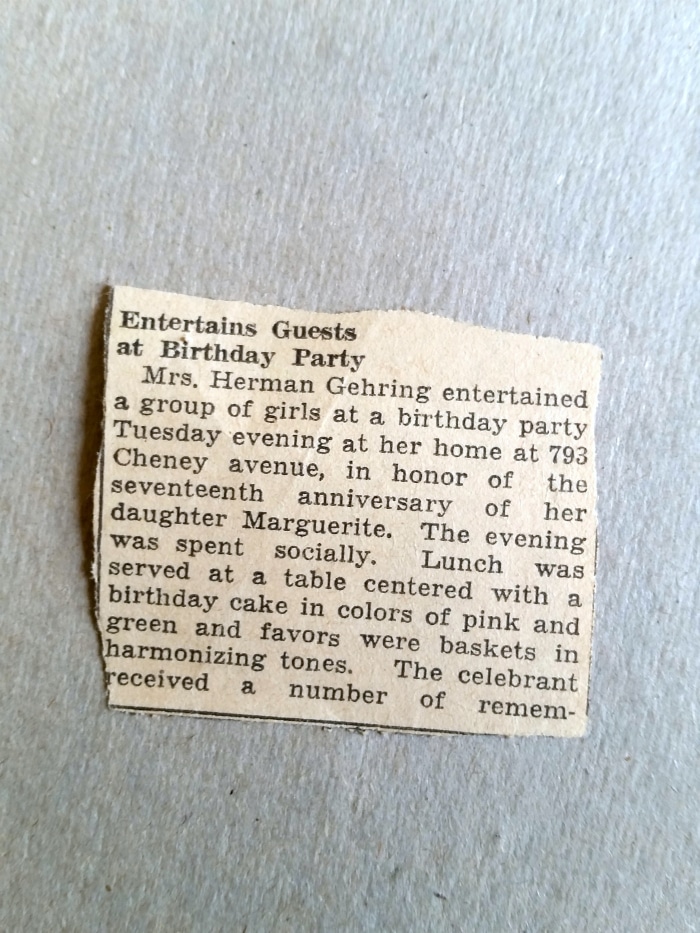 My grandma is everywhere I look in our home.  I found some pieces of her life this week and shared one of them on instagram.  I also found this little newspaper cut out that talked about her 17th birthday party that was in the newspaper. 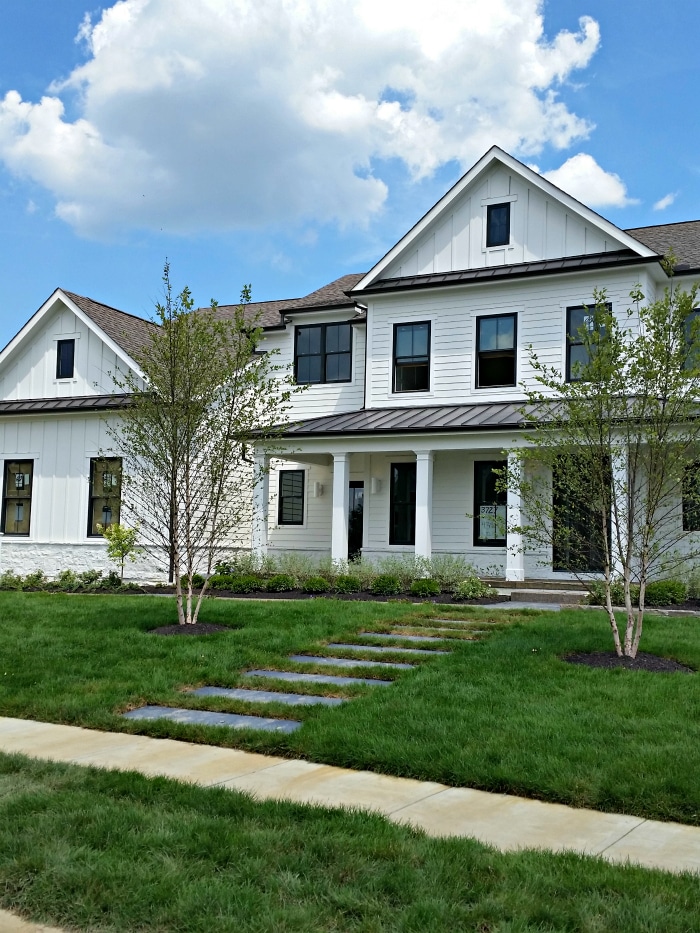 Like I mentioned, this week was full of the old and the new.  I was given an opportunity to go on the muddy boots tour of the BIA parade of homes in Powell, Ohio.  It was perfect timing since I’m in the process of trying to figure out some of our fixtures in the home.  My favorite exterior was this home that looked like a farmhouse.  It reminded me why I picked white siding and a charcoal metal roof for our home. 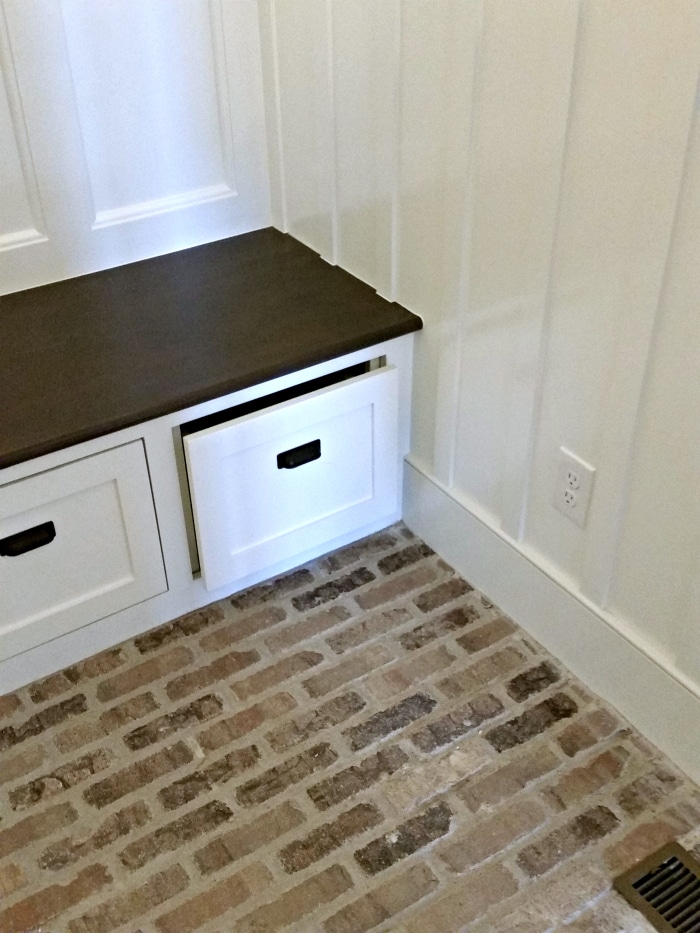 I was also excited to see the brick floors.  I had been debating on whether to get them for our kitchen.  (You can see what our kitchen currently looks like here.)   And while I LOVED the look, it would be a nightmare to clean, in my opinion.  It is pretty though.

I did love the built in cabinets that were by the fireplace in one home. I am getting the inset look for my kitchen cabinets. So exciting! I was really inspired by how many antique and vintage looks are really “in” right now. It makes it easy to get the house looking original and I feel all trendy doing it. 🙂

This week we accomplished:

I did received tickets for the giveaway from the BIA Parade of Homes. All opinions are my own.