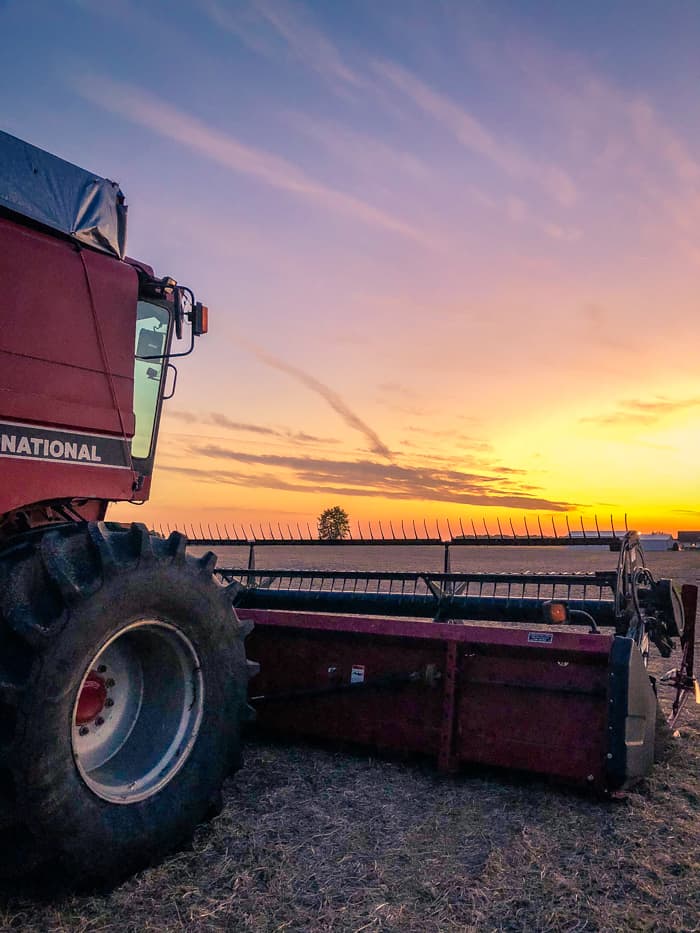 Harvest.  That’s the one word that summed up this month.  October came in with the heat and left with the cold and rain.  And while we didn’t really get to experience the nice fall like weather this year – we did finish harvest, visited the pumpkin farm (twice) and overall enjoyed the month of busy. 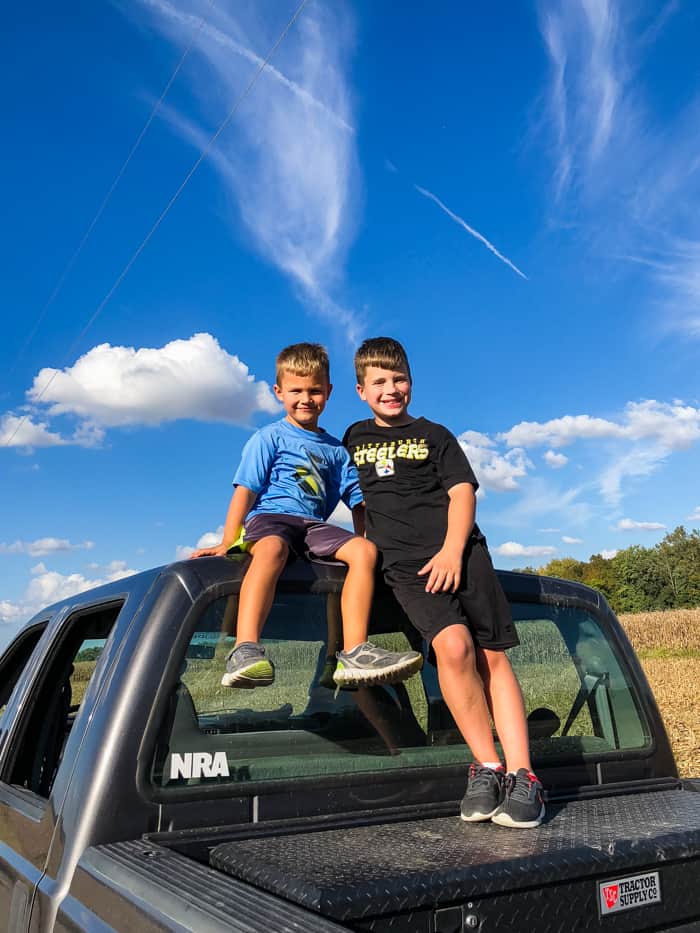 Harvest started in late September, but soon into October while still feeling the heat, (notice the boys in shorts!) we were out in the fields most nights.  The boys would get off the bus into my waiting van, and off to the fields we would go. 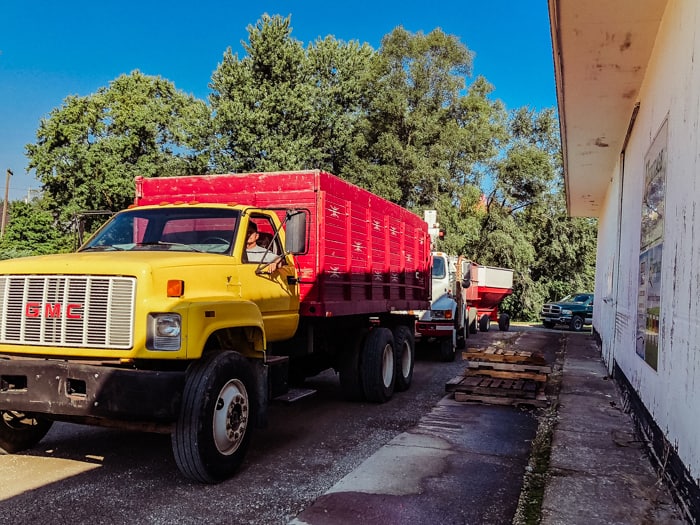 My contribution was bringing dinner about once a week but also hauling the grain to the elevators.  My brother farms and his wife, my mom, my dad and I haul the grain in.  Since my brother works full time we typically haul in the harvest from the night before while he’s working.  Then once the boys are off the bus, we run over to the fields where my brother is harvesting and try to get in as many loads as possible until the elevator closes.  Sometimes there is a line and we wait a few hours. 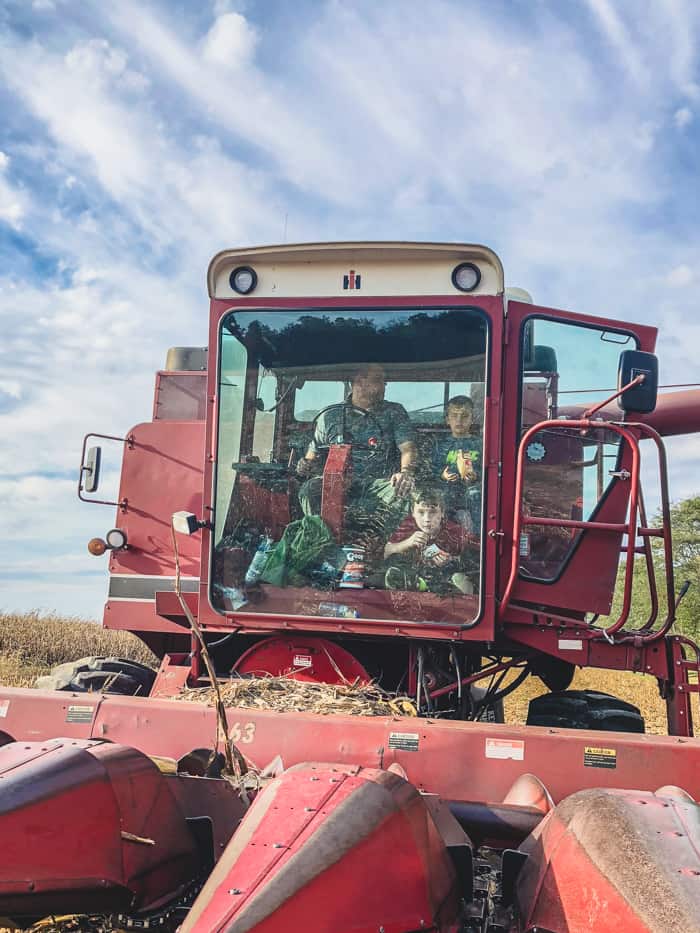 It’s somewhat of a race, and my boys were great sports.  (Pun intended!) I know that most days they would have rather gone home after a long day of school, but they were troopers.  Up into the combine with their bag of snacks they would go.  They would ride with their Uncle for at least an hour so I could run to the elevator with the harvest.  When my husband came home from work he would pick them up. 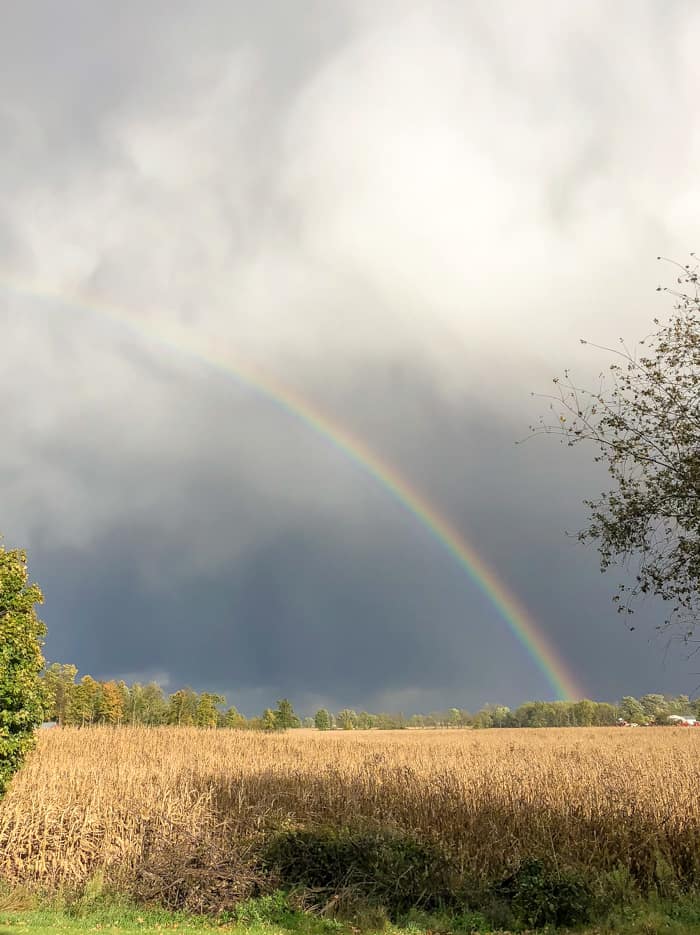 Harvest is always an exciting time of the year.  The fruits of all the work are now evident and it’s a race to get the crops in.  Unfortunately, we’ve had a rainy fall so it felt like the combine would run for a few days, then it would rain.  You’d have to wait a few days for everything to dry out – and then back at it again until late in the evening if the rain was coming again.  Thankfully the last week of October was dry and we were able to finish. 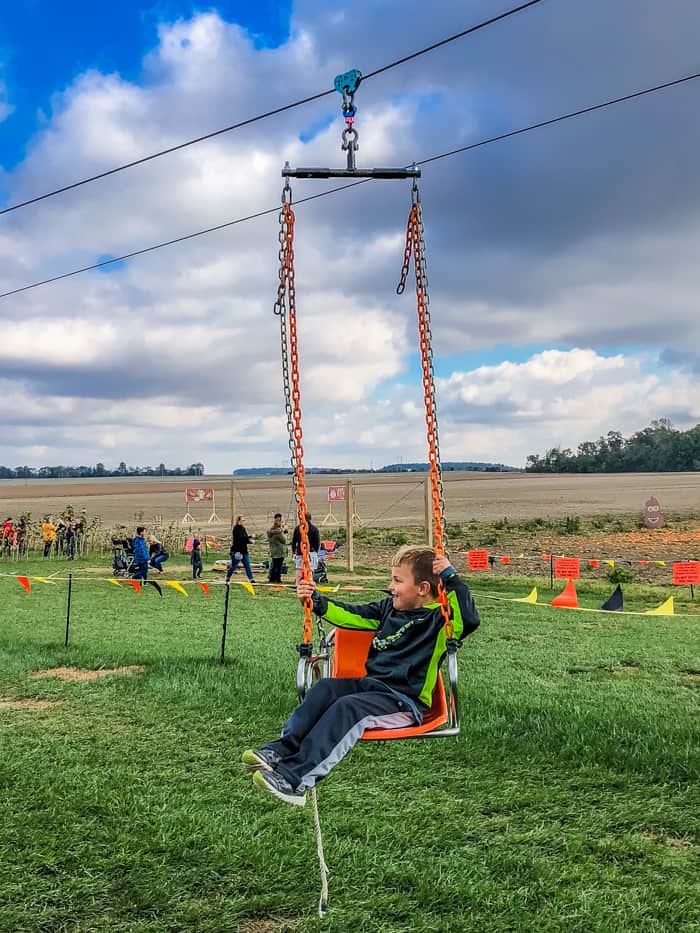 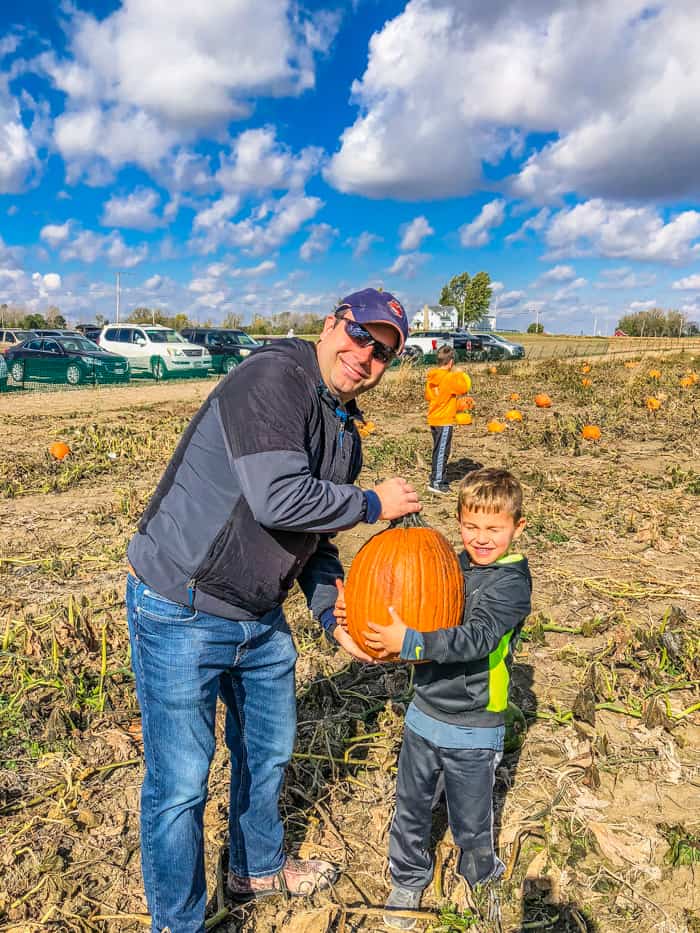 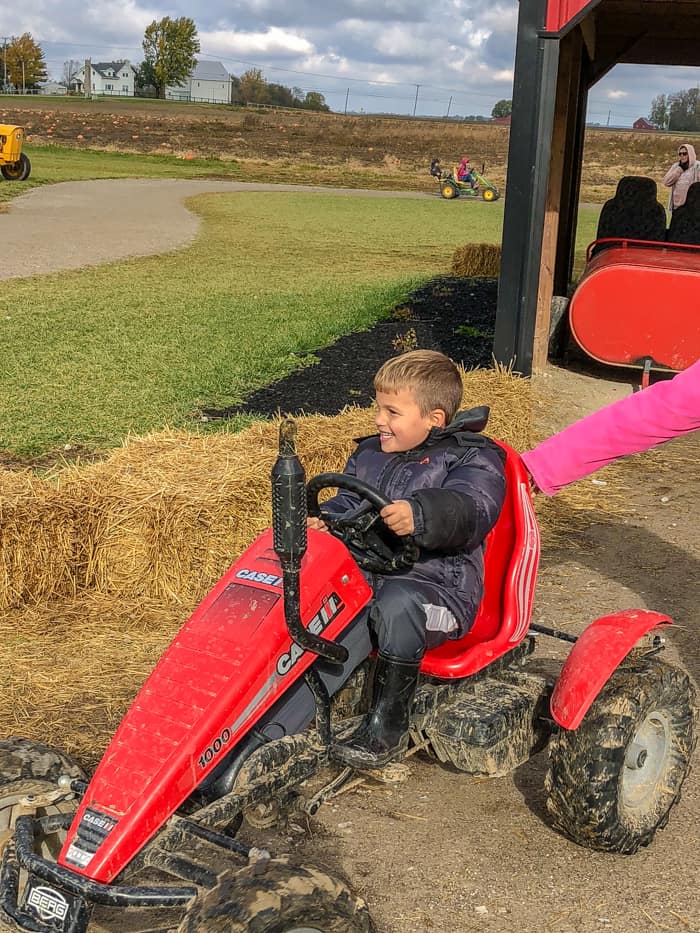 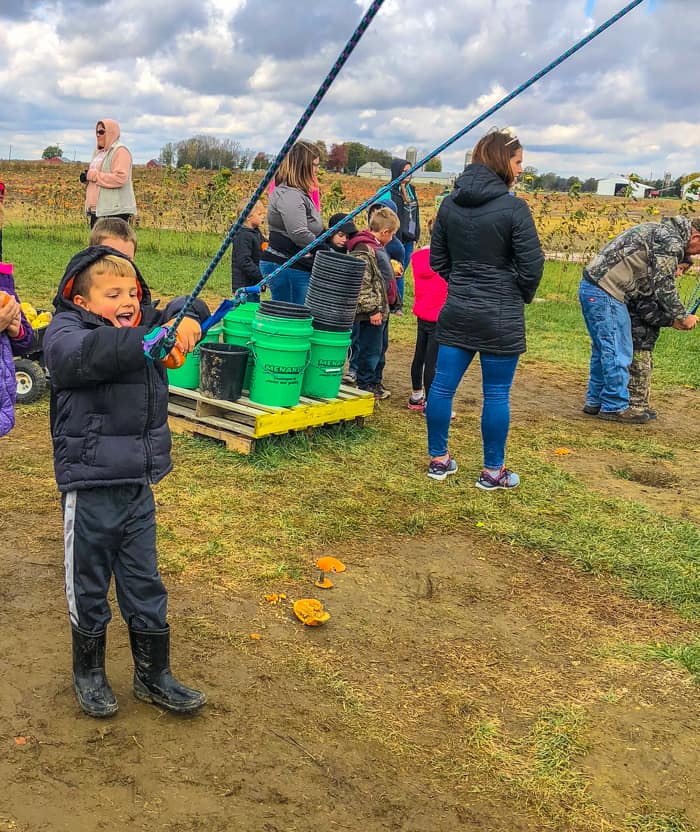 But the month wasn’t all about harvest.  We are lucky to live near a fantastic pumpkin farm.  In fact, it’s a farm that is close to the home I grew up.  We visited there twice.  Once, with family and the second time on a field trip with my youngest.  I swear my other child was there for one of the visits, but he’s in the selective “don’t take my picture” phase. 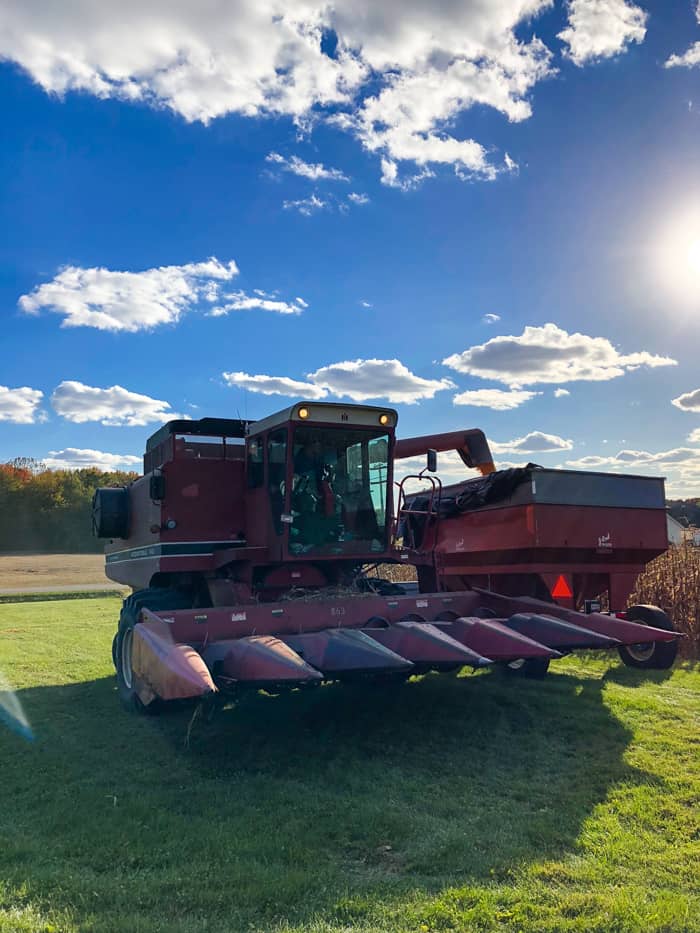 In reality most of the month was about harvest and revolved around harvest.  I am very much on the periphery as it’s my brother who is the farmer.  But it’s our entire family that feels tied to the land that he farms as it’s been in the family for generations.  That’s probably why I don’t mind him driving his combine all over my lawn! 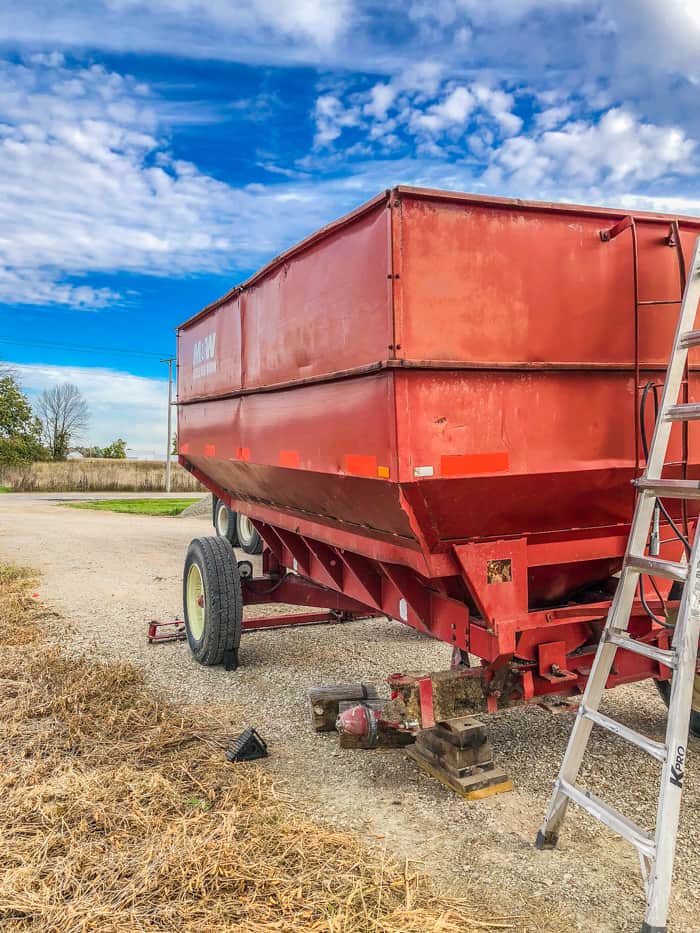 This month, when things got rough we all stepped in.  We had multiple flat tires this year, one of which was dragged by vehicle for miles. (It wasn’t me!)  The wagon that lost it’s tire was full of soybeans.  And after having a wrecker tow truck bring it back to the barn, we all woke up the next morning trying to figure out how to get the soybeans out of the wagon before it would rain.

Soybeans can’t get wet.  It’s bad if they do.

That morning my in-laws from Tennessee were visiting.  My dad was on the phone trying to rent a vacuum to suck out the soybeans, but it was becoming apparent that it was not available in the time frame that we needed it.  Rain was in the forecast. 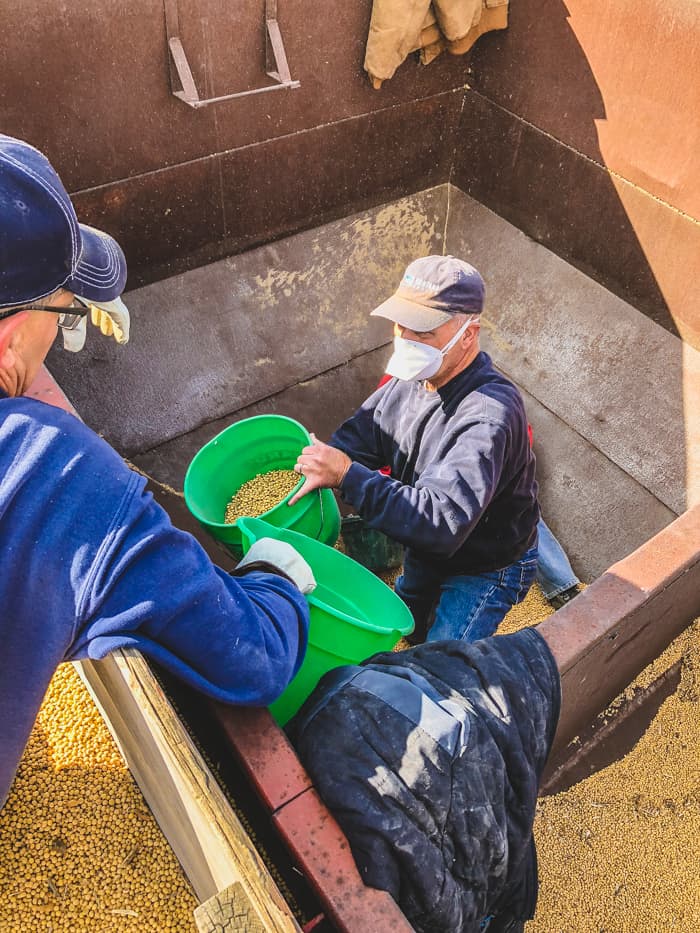 We made the decision to grab the buckets and do it by hand.  BY HAND.  I’m not sure if we really knew what we were getting ourselves into.  I’m pretty confident that my father in law from Tennessee definitely did not.  But we were motivated.  So while my brother was working that day, we emptied the soybeans out of the wagon bucket by bucket. by bucket.  by bucket.  You get the picture. 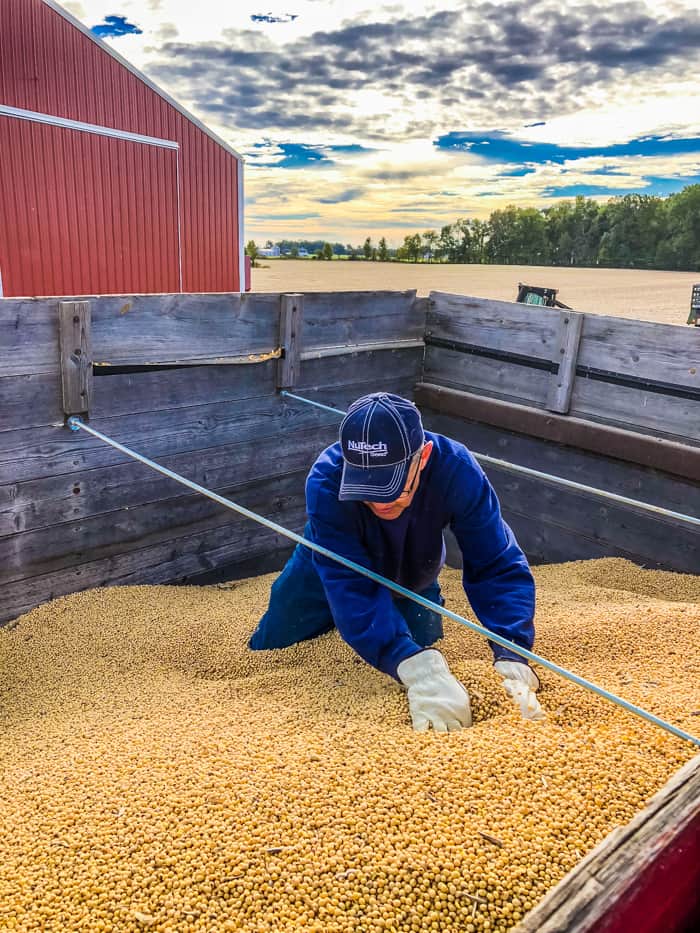 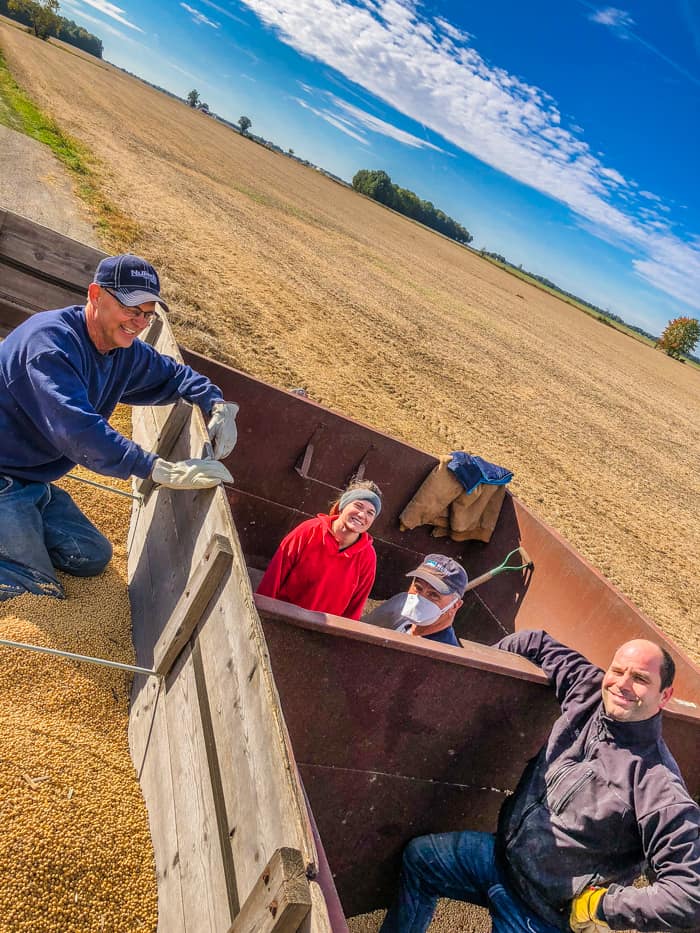 It was no small feat.  I was very sore the next day.  But we did it!  We pulled together and we avoided a crisis because we worked as a team.  No one would have called it a good time, but we did it together.  To me it’s the perfect picture of farming.  No farmer does it alone.  It takes selfless acts of help from others to bring forth the harvest when a tough situation occurs.

And if you’re curious, it was 19,000 pounds of soybeans we moved by hand from one wagon to another.  Not even joking. 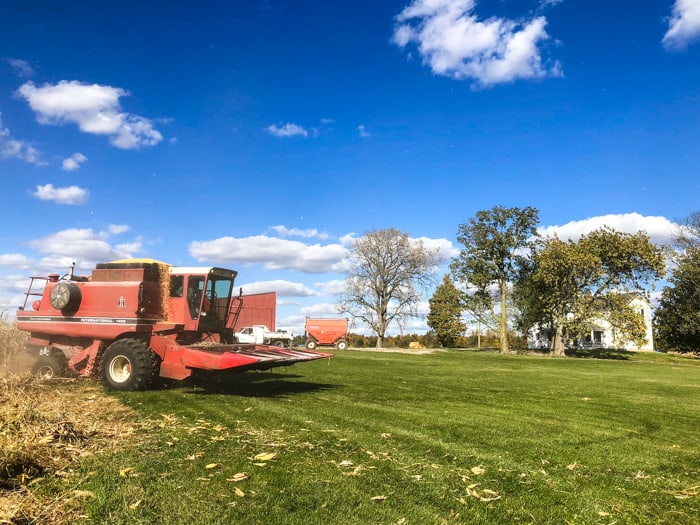 The gift that my brother gives us by farming is not lost on me.  To watch the combine harvest the fields around our home more than a century later, as our first relatives first did, is something unique and special.  And I know we don’t take it for granted. 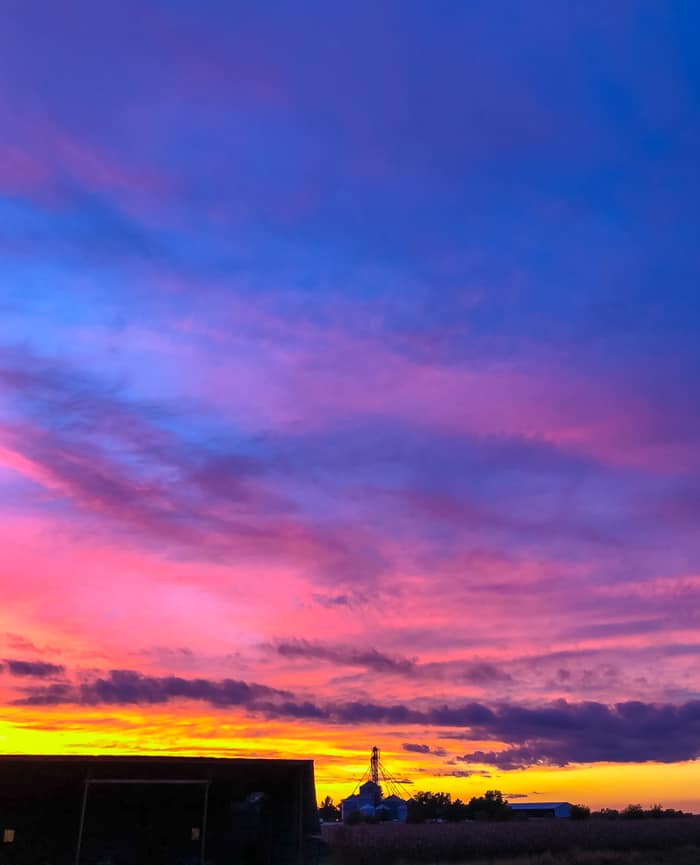 But now the harvest is over and we can rest.  I know I say this every month, but I really am going to start working on more projects around the home now that these sunsets will be fewer and farther between.  One project involves our piano.  And the other involves an antique light. 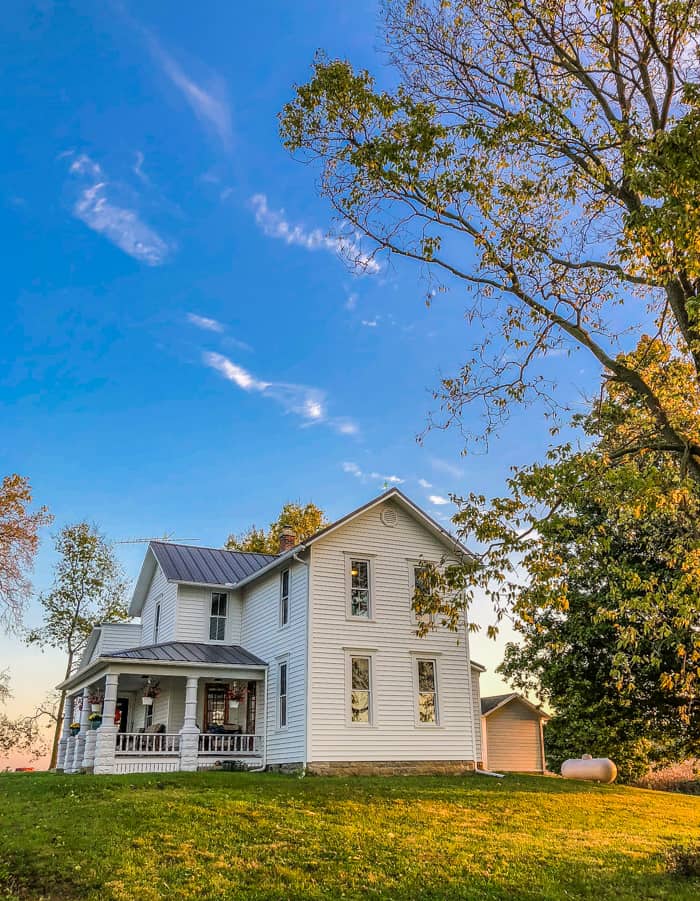 I’m nervous about both, but I’ll be sure to take you along for the ride.