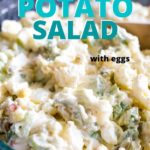 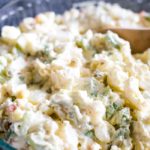 How to make a delicious homemade old fashioned potato salad recipe with red potatoes and hard-boiled eggs in a creamy mustard celery sauce.  This is our go-to recipe for Memorial Day, July 4th, and any family reunion.  This recipe is best made the day ahead. 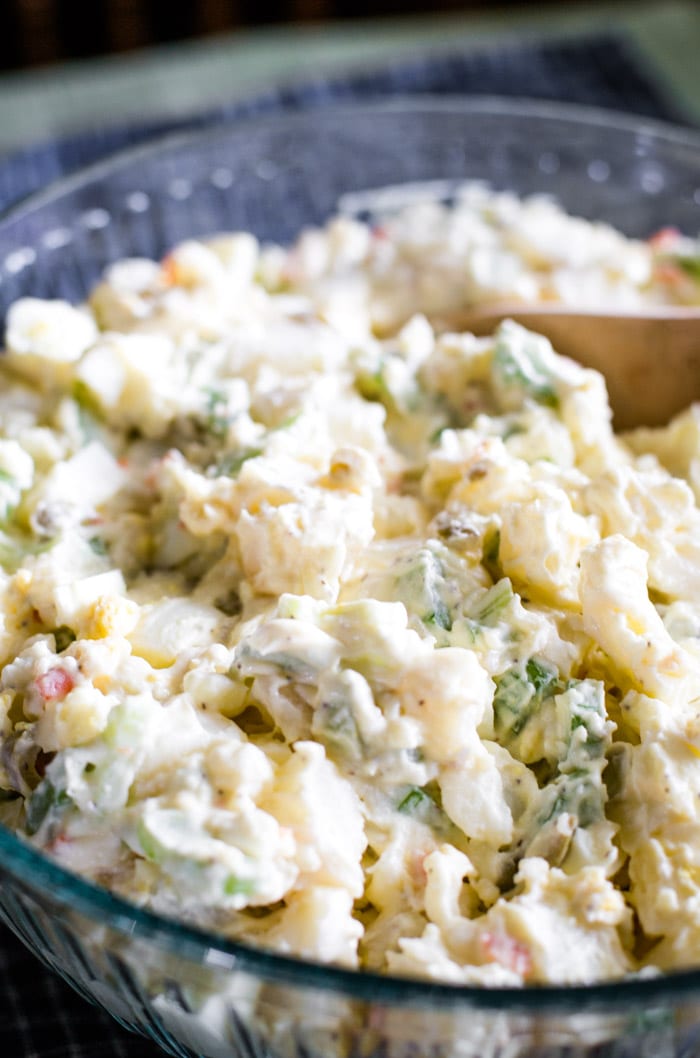 Most likely as a child, I did not appreciate my mother’s potato salad.  Fast forward to life today and it’s the highlight of every big family meal whether it’s Memorial Day, July 4th, Easter – whatever the occasion my mother decides to make it.  And because it’s that good with its creamy celery sauce with red potatoes, celery, eggs, and green olives – I choose this over any main course.  Yes.  No need to take up room in my stomach for anything else but this potato salad.

While homemade potato salad is not a side dish that is put together in minutes like these slow cooker baked beans – it is worth it.  You cannot get the same great flavors with store-bought potato salad.  Either they have too much sauce or not enough flavor.  I’m going to show you how to simply make this recipe the day before you need it (because it’s better the second day!)

How Long To Boil the Potatoes for Potato Salad

Place five pounds of washed whole redskin potatoes in cold water.  The water should just cover the potatoes.  Bring to a boil.  Once boiling, boil for 10 to 15 minutes or until the potatoes are fully cooked.  My mom’s tip is to use two stock pans with 2 1/2 pounds of potatoes each so that you can decrease the time each one comes to a boil lessening the time in making this potato salad. 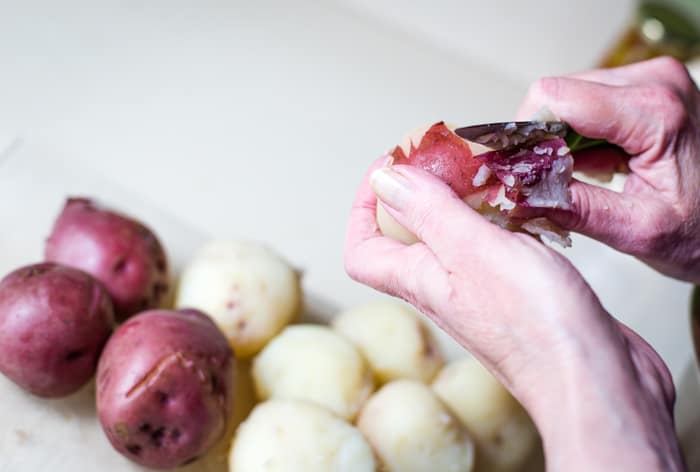 How to Easily Peel the Potatoes

After boiling the potatoes remove them from the water using a colander.  Run cold water over them to stop the cooking process.  Place in a bowl in the refrigerator and let them fully cool.  It will take about two hours.  After they are fully chilled, you can peel them easily by just scraping the skin off the potatoes.

How to Make Potato Salad 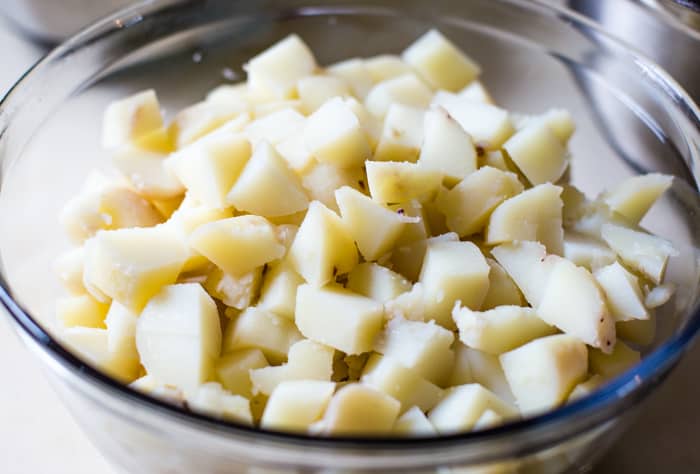 Now, that we’ve conquered how to cook and then easily peel the potatoes.  It’s time to dig in and make the potato salad.  Cut each red potato into bite size chunks and place in a bowl. 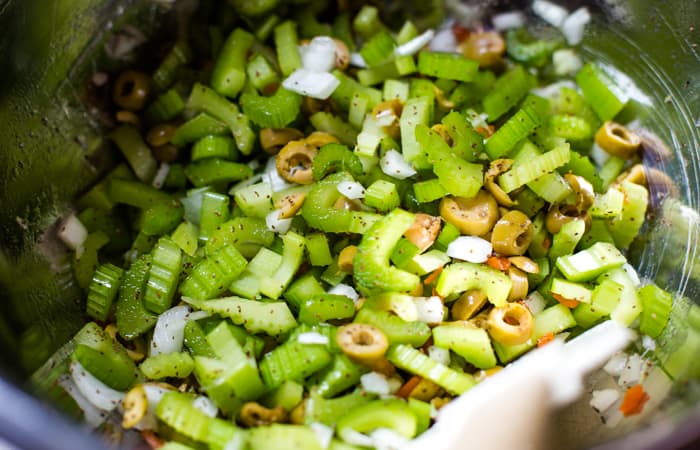 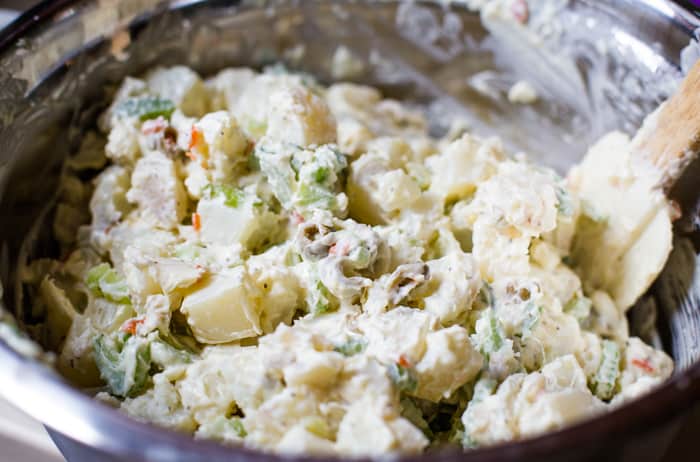 While the potatoes are soaking up the flavor, in a separate bowl, mix miracle whip, mayonnaise and mustard.  After the potatoes have fully had their chance to hang out with the celery and onions add half of the miracle whip mixture.  Mix and then add more sauce until you have our desired consistency.  I typically add it all, but it never hurts to slowly add to make sure it’s exactly how you like it.

Chop up the hard-boiled eggs and gently fold them into the potato salad.  When combined place the potato salad in the refrigerator to hang out.  It’s best made the day before so that the flavors can really come together!  Keep refrigerated until ready to serve.  In fact, it’s best to keep it chilled even when serving because of the mayonnaise. 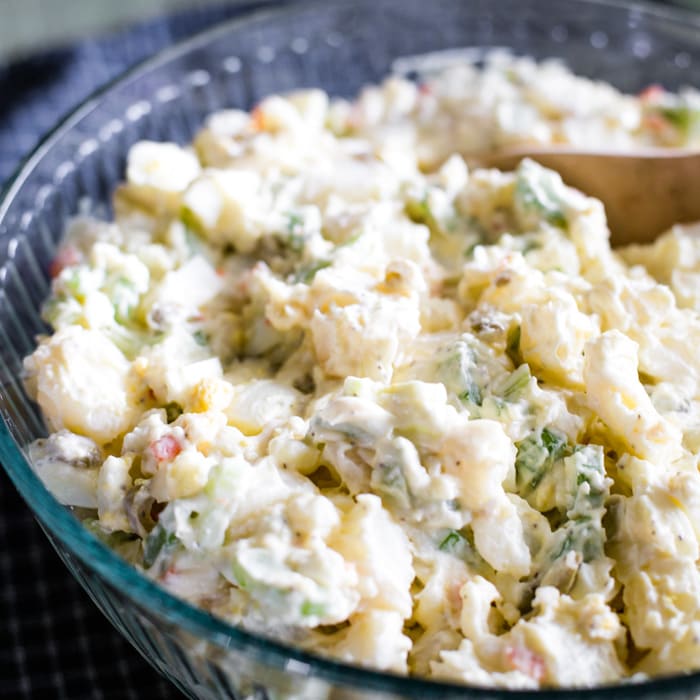 I hope you enjoy this potato salad as much as our family has LOVED it.  It’s my dad and I’s favorite and you’ll find us with second and third servings of this homemade potato salad when my mom makes this.  Enjoy!

How long does potato salad last?  In the refrigerator, you can keep potato salad for up to 3 days.  Because the ingredients include mayonnaise make sure to keep the potato salad chilled while serving.

Do you cut up the potatoes before boiling them?  No!  It’s best to leave them whole so that the flavors of the potato do not get watered down.

Do you leave the skins on when making potato salad? I think it’s best to take them off but it’s a personal preference.  The skins will easily fall off as you stir leaving you with potato skins in the potato salad.  If you prefer it that way, go for it.  I personally like to skin my potatoes first.

How long do I boil the potatoes for potato salad? Fully submerge the potatoes in cold water. Bring to a boil and then boil for 10 to 15 minutes or until the potatoes are fully cooked.  You don’t want to overcook them because they will become too soft and will break apart when mixing together with the other ingredients. 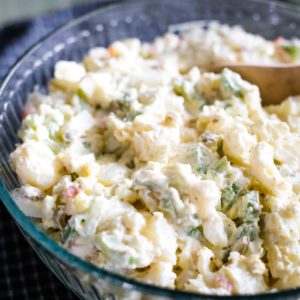 This potato salad is best when made the day before you need to allow the flavors to really mix.