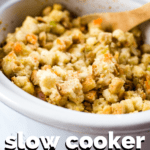 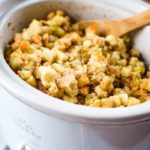 Make Thanksgiving easier this year by making slow cooker stuffing! Packed with sage and rosemary flavor and crispy around the edges, just like you’ll love it, this stuffing recipe is perfect for that extra stuffing everyone always wants.

Pair this stuffing with slow cooker cranberry sauce or mashed potatoes to make it easy this Thanksgiving!

Nothing says Thanksgiving more than stuffing. It’s my favorite side dish and we never ever have enough! My mom makes it traditionally in the bird, which is why I like having additional stuffing on hand.

This slow cooker stuffing recipe has the same traditional flavor as it’s seasoned with sage and rosemary. It gets crispy around the edges – it is ALL the things.

How to Make Slow Cooker Stuffing

Add two tablespoons of butter to a saucepan and saute the onions, celery, and carrots until the onions are translucent. Add the rest of the butter to melt. Combine with 12 cups of bread cubes in a 4-quart crockpot.

Mix the seasonings into the chicken broth and pour over the bread cubes in batches while also adding the beaten eggs.

Important! Get the stuffing just right!

You want to add about half of the chicken broth to start. Gently fold it in so as not to break apart the bread cubes. Add a little more. Give it another gentle stir. You want the bread cubes to be slightly moist. You don’t want to add too much or too little moisture and depending on your brand of bread cubes, it will make a difference.

Slow cook on low for 3 hours. And serve it up! I love the flavors of stuffing. It’s my favorite part of Thanksgiving and now not only is it easier to make – but you can make more!

This recipe was my inspiration. I tried it multiple times and decided, in the end, to leave out the mashed potatoes. I’m not sure how old fashioned it truly is when it’s made int he slow cooker – except to say that those delicious flavors are all there. Enjoy!

What kind of bread cubes should I use?

For this recipe, I found that the best bread cubes were the ones made by my grocery store. They seemed to have the best texture. However, a brand name plain bread cubes should work just as fine.

What if my stuffing is too soggy? Too dry?

It’s really important to slowly add the chicken broth! Don’t add it all at once. Depending on the brand of your bread cubes you will add a little more or a little less. You’re looking for the bread cubes to be moist but not soggy after a gentle stir. You do not want any liquid sitting on the bottom of the slow cooker. 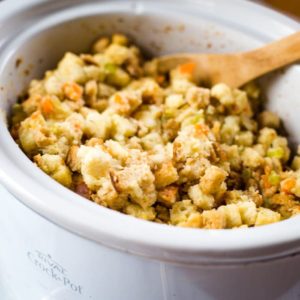 If using a large slow cooker you can double the recipe.  Make sure to add more time to the cooking process.  The internal temperature should reach 165˚ F.