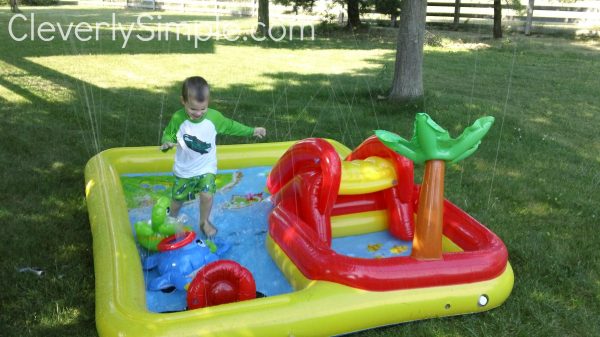 Here’s to summer fun!  I ordered the crazy fun looking pool that Target offered as part of their Daily Deal earlier this week.  One day later, it arrived.

Since our 7 month old was napping, I hurried to open the box with my toddler-man.  (First mistake, but mama was excited.)  We dug the pool out and headed outside.

After multiple calls to my hubby and dad, I located a tire air compresser to make the pool a pool.  Unfortunately, the air compresser uses a car battery to function.  Toddler-man and I drove my car into the backyard and got busy filling the pool with air.

Twenty-five minutes later the pool was still flat.  My thought was that the air compresser was not powerful enough.  We reluctantly abandoned our quest and headed inside to the air conditioning.  At this point I was seriously questioning my decision to start this adventure during the afternoon when the little one was to wake at any time.  Not to mention, it was 93 degrees outside.

Welp, upon returning inside and once my brain had apparently cooled, I realized that I had been filling the water sprayer – with air.

I have to admit, I was a bit relieved.  We now had an answer.

So once my hubby returned home from work, we ventured out again (car still parked in the backyard) and attempted to fill the pool – with air.  Not 5 minutes later the air compresser died.

At this point, my toddler-man was dressed head to toe in swim gear and was ready.  Since I now had knowledge of where the water sprayer was, I plugged in the hose and we made the best of it. 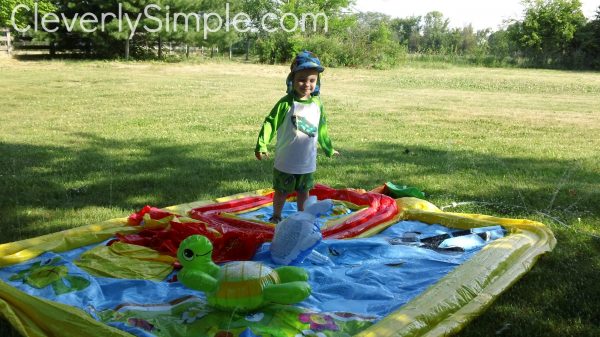 Toddler-man knew no different and had a blast.

It wasn’t until about an hour after bedtime (…a bedtime that took awhile since I had to convince toddler-man that, no, he could not sleep with the blow up turtle and whale.  And yes, they would be okay.) – that I realized that I had left my car keys on the trunk of my hubby’s car.

No problem, except that my hubby had left for a meeting not 30 minutes before.

This morning I was ready to conquer the pool.  Toddler-man was dressed and ready for water once the 7-month old was down for a morning nap. 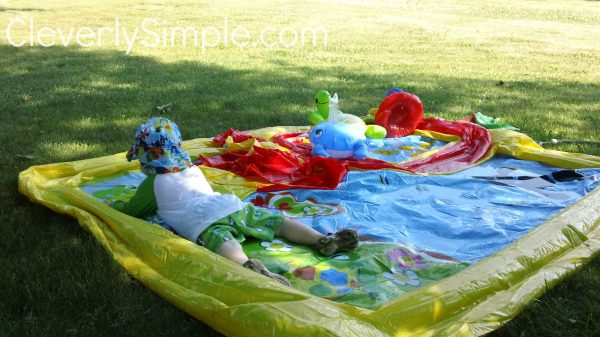 Here he is “swimming”.

He had a blast.  I started to question why I ever needed to blow this thing up.  (I love kids.)

However, a call was made to grandpa and his big compresser and within 5 minutes all was right with the pool.

It was a reminder to me that as a parent even our best laid plans can fall short.  However, in the eyes of a child, it doesn’t matter.   The best can be made and fun can be had in a big way.

(By the way… about 2 miles down the road my husband heard something rattle in the back of his car.  He pulled over and walked to the back where low and behold – there were my keys in the ditch.  No joke.)