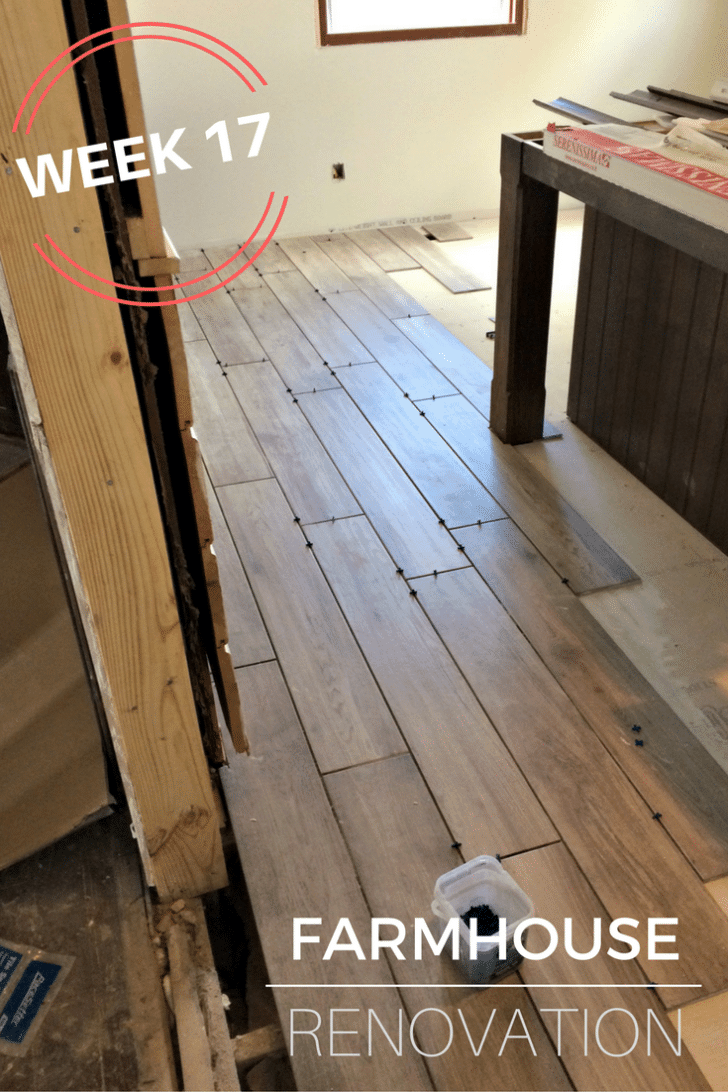 There was quite a bit accomplished this week with our farmhouse renovation.  Nothing was really completed, but lots of little pieces were started.  Sometimes it feels great to be getting so many things started.  At other times this week I had the hope that we would just complete one thing in it’s entirety. 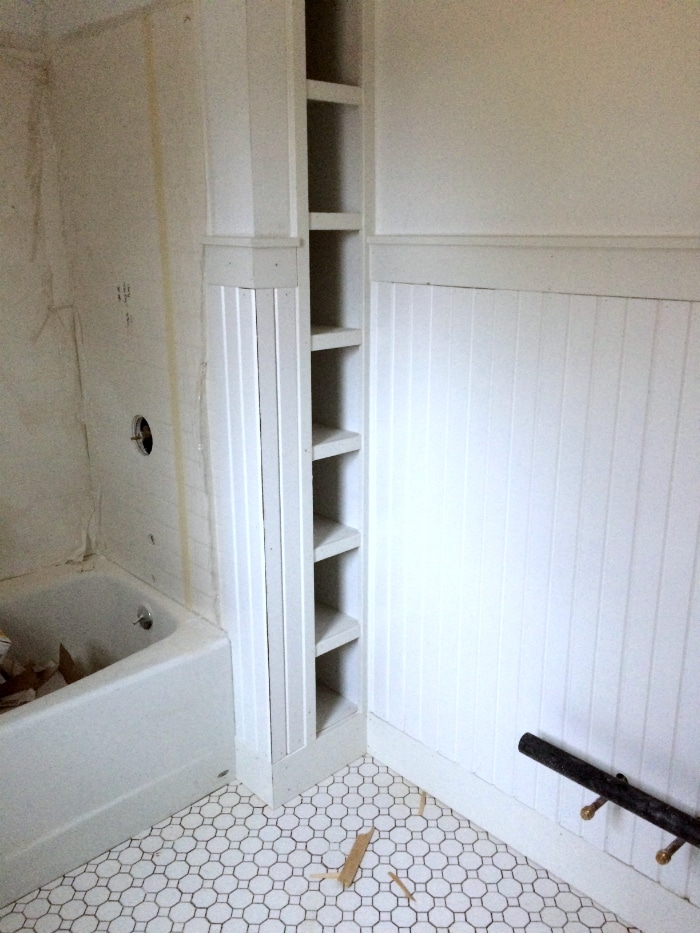 The most exciting change this week was the bathroom.  Our very talented subcontractor completed the bead board like paneling in the bathroom.  I had picked out a picture of what I wanted from pinterest, showed it to him, and he created exactly what I wanted!  I wanted something that fit an old house and looked timeless. It still needs to be caulked and painted, but I think it looks grand.

He also built in shelves behind the bathtub.  Instead of having access through the living room, we can now gain access through the shelving.  And we have beautiful storage!  This was all his idea, and I am so thankful he had the foresight to do it. 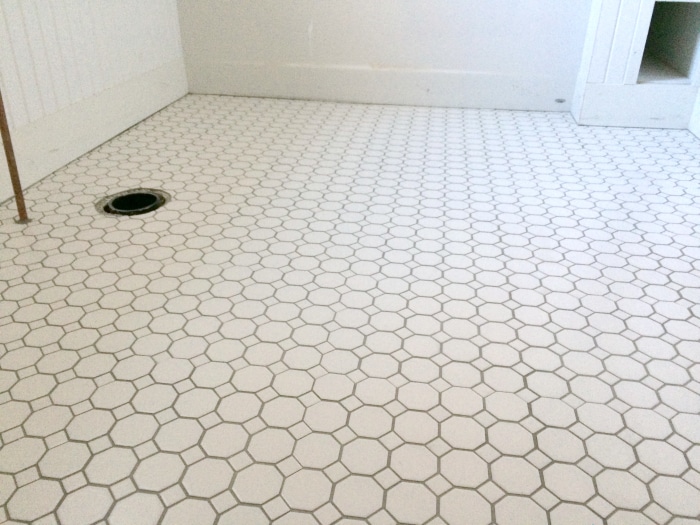 Here’s a close up of the bathroom tile.  I picked a silver grout.  I wanted something dark but not too dark.  My vanity is gray, so I think it will coordinate nicely.  At least I’m hoping.  All this picking out colors for an entire room based on little pieces of paper is for the birds!  So far, everything has come together nicely but boy, does it cause a bit of anxiety for me.  Too many choices!  🙂 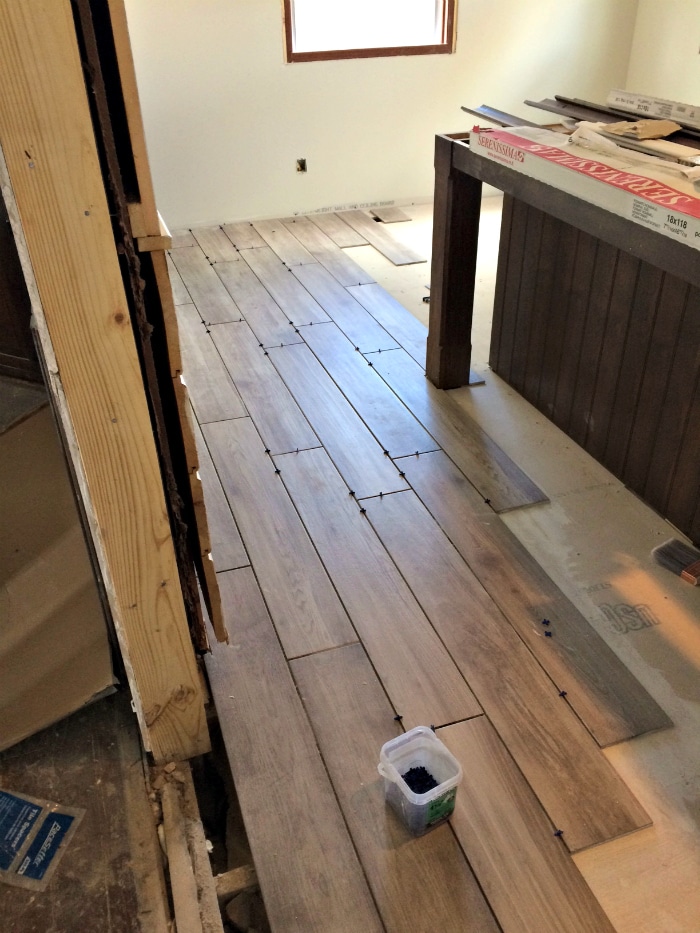 Since we’re on the topic of tile, the tile started to go down in the kitchen.  We had originally thought about doing hardwood floors, but we decided against it.  My concern was that the dining room original 1860 floors would never quite look the same as the new floors in the kitchen.  I also had the concern of hardwoods in the laundry/mud room.  So instead, we picked a long tile that has a wood grain. It will tie the two together, but it’s obvious they were not intended to match. 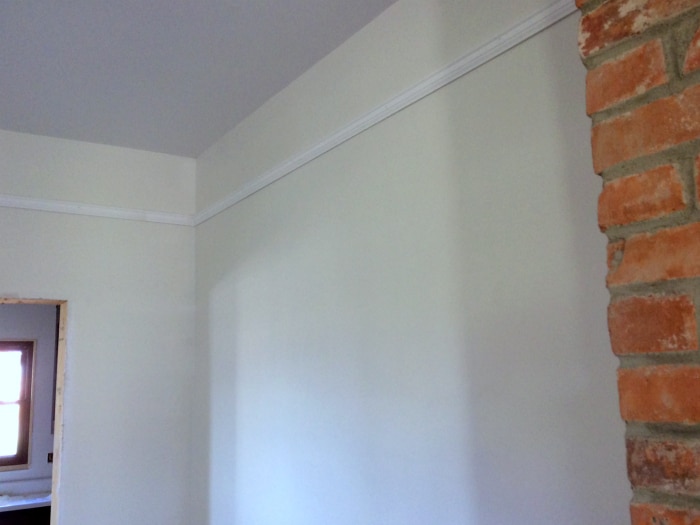 One of the little touches I’m adding is picture railing.  Since we spent so much on skimming every single inch of the walls, I don’t really want to put holes in them, ever.  So we had picture railing installed so that we can hang pictures and change them all the time and not worry about marking up the walls.  I ordered 190 feet of picture railing, and it covered only 2 ½ rooms.  Whoops!  Apparently, I’m not good at measuring things. 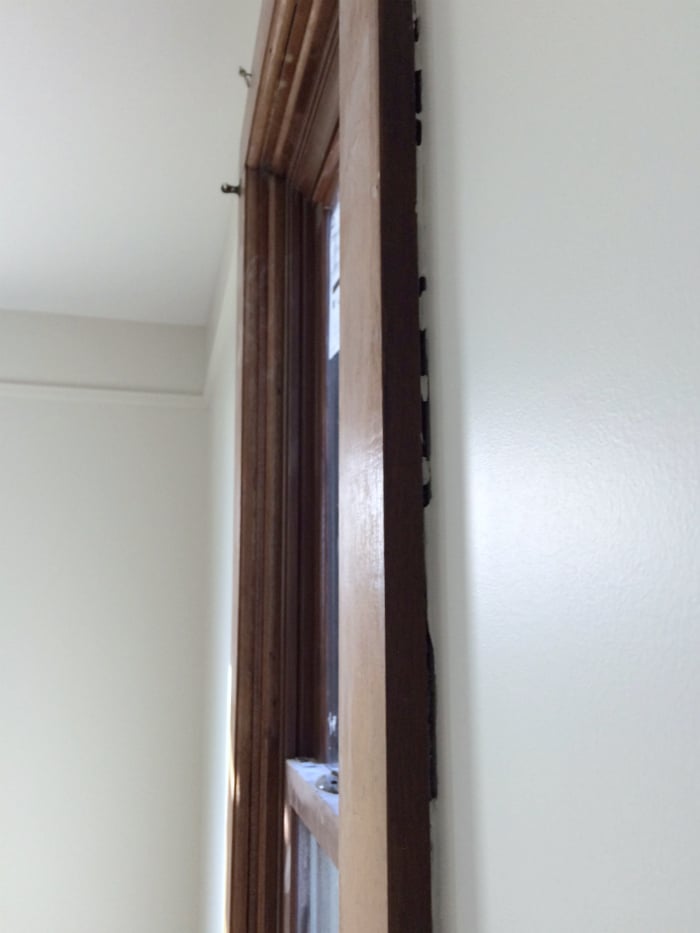 I spent the last part of the week cleaning off portions of the woodwork so that they could be backfilled.  The woodwork is not flush against the walls in many areas of the house.  This wasn’t noticeable when we had SIX layers of wallpaper.  Now, with the paint, it’s very noticeable.  This will be taken care of by the painter.  I had to clean the woodwork so he could get a good clean edge on the woodwork to do his work. 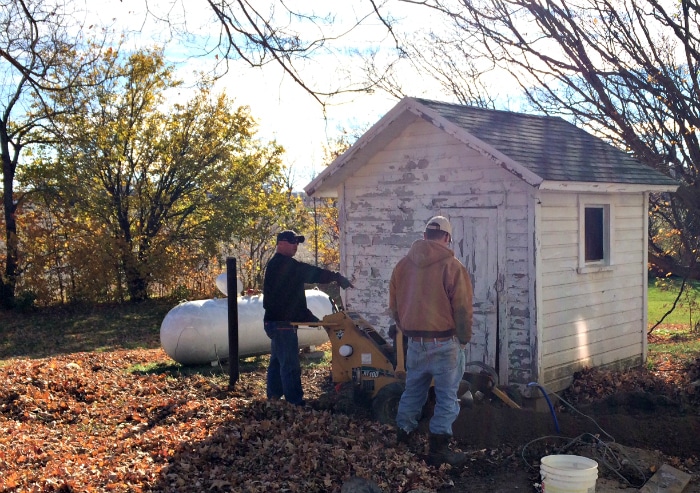 One project was completed this week!  The gas company came back to trench our gas line.  When they originally came out a few weeks ago, they were not able to trench since it had rained days before.  As all things with this house, the minute you start something it doesn’t quite end up the way you planned.  We uncovered a sidewalk underneath and had to take a longer path to the gas tank. Oh, well.  It feels good to have one thing checked off the list! 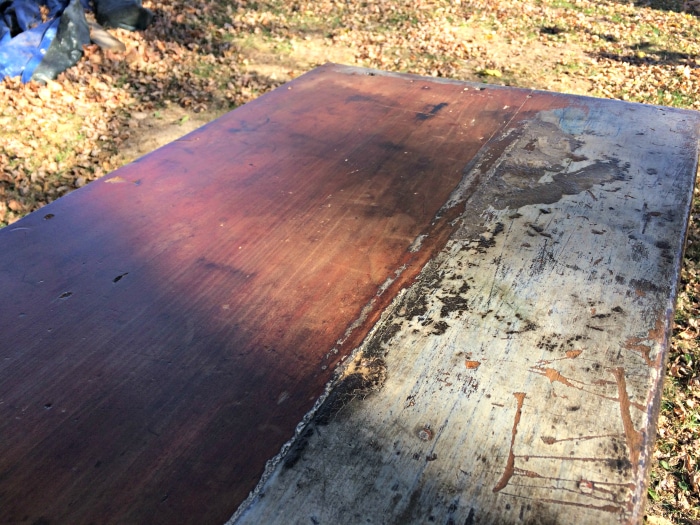 I personally worked on a few projects this weekend.  I had asked on instagram and facebook whether to repaint with chalk paint a primitive cabinet I found in the barn, or to simply put a clear coat on it.  I decided to go with a clear coat.  I just loved the old look to it and decided if it didn’t work out, I could always paint it.  Well, I love it! 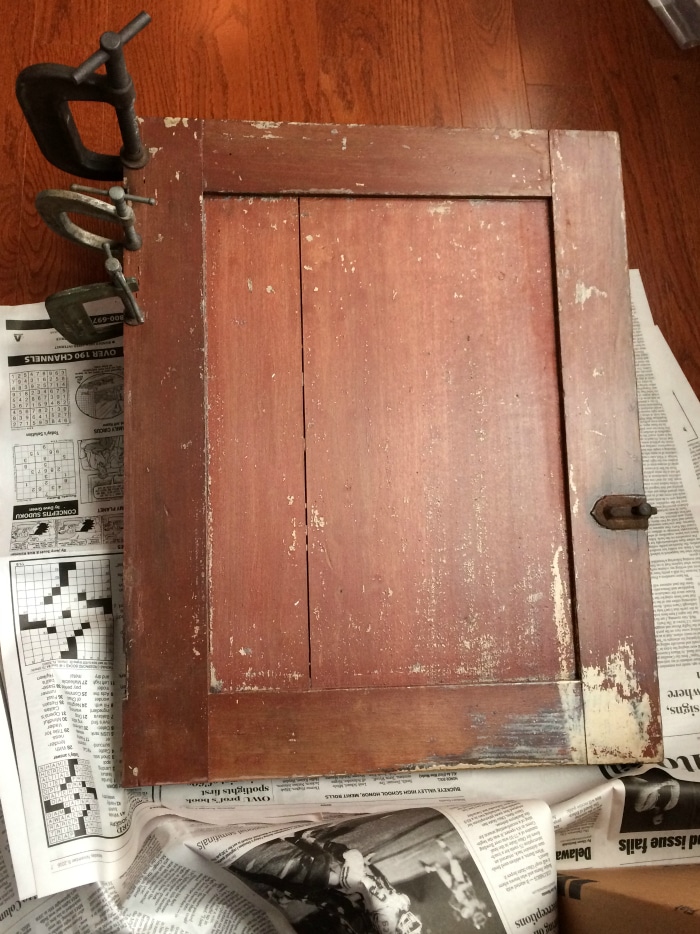 However, as I said earlier, nothing comes easy.  After applying two layers of poly to the cabinet, the wind literally took the door and SNAPPEd it off.  I can’t make this stuff up.  After over 100 years, all it took was me trying to bring it back to life, to truly damage it.  I was so sad.  My dad is coming to the rescue (again) and has glued it back together.  It should be okay.  But seriously, check out the beautiful color on the cabinet! 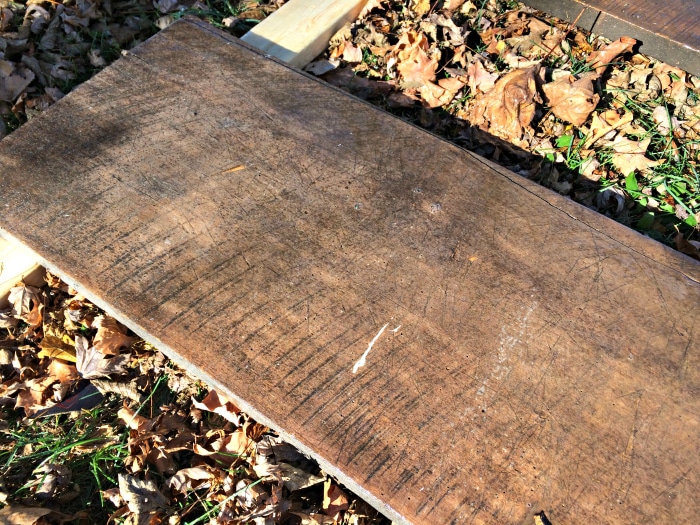 My last project of the week was to find some barn wood to scrub up so we could use it in the kitchen and laundry as shelves.  I found solid pieces of wood that were 2 inches thick and about 15 inches wide.  They look beautiful all cleaned up!

All in all, a good week. We have a lot going on this coming week.  The floors will start to be refinished, the kitchen floors should be finished and the paint in the whole house as well.  Thanks for following along!  🙂