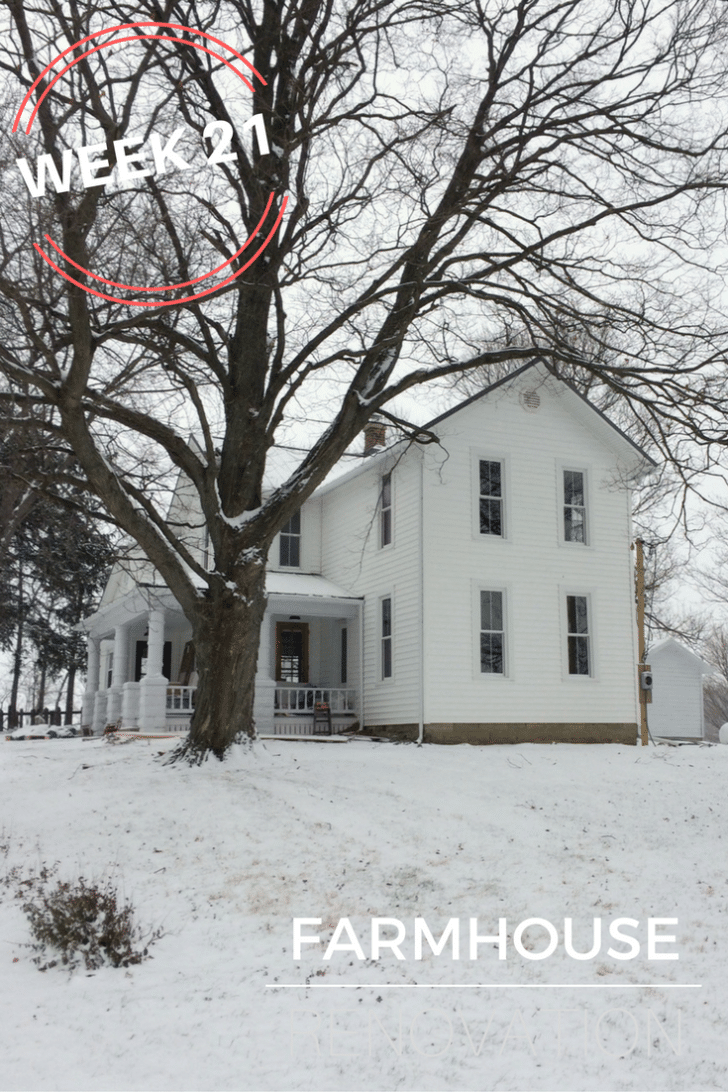 I’ve never been transparent on the fact that we’ve not been living at the farmhouse throughout the renovation process. You might have guessed that fact since I more than once mentioned our lack of toilets. However, this past weekend we moved in. It feels grand. I am so grateful for the opportunity to be sixth generation in this beautiful farmhouse.

I am also overwhelmed.  The recap this week will probably be shorter than normal.  There was quite a bit that happened at the farmhouse.  In all honesty, I have quite a lot to do in unpacking and getting our home ready for Christmas.  I have two gifts purchased.  And it took hours last night to find my plates. 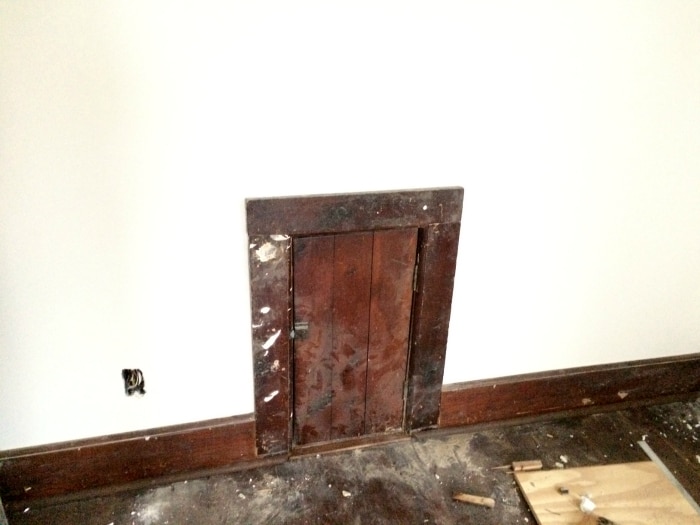 One of the highlights for me this week was moving this little door into our boys’ room.  It had been in the hallway upstairs as an access to the attic that is above the kitchen.  Since we’ve vaulted the ceiling, we didn’t need a door opening into the space below no matter how much my boys would have found great fun with that.  We had it moved into their room. There’s still a little attic above the laundry room.  It’s not finished yet, but it will be their little space.  I’m pretty excited about it. 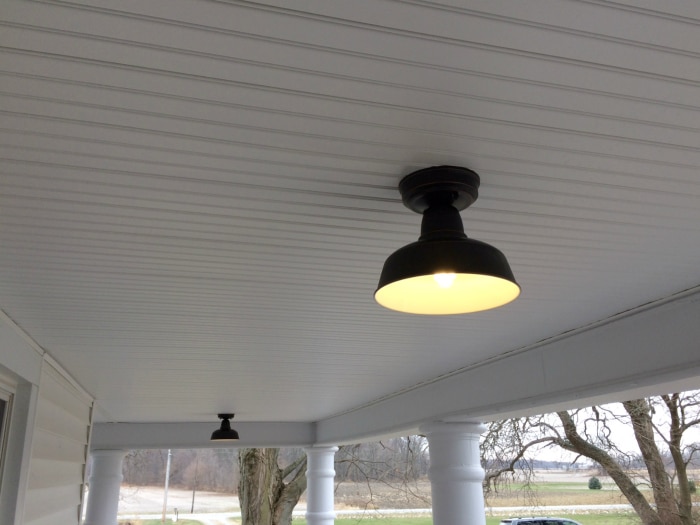 The lighting is almost done in the house.  Most of the house has $4 boob lights, as I like to call them, I found on clearance. (I think the correct word is flush mount round light?) I couldn’t make a decision for every room and lights are expensive so it will be one of those fun things I’ll be able to buy for over the years.  The porch, however, received lights that I picked out.  I like them.  🙂 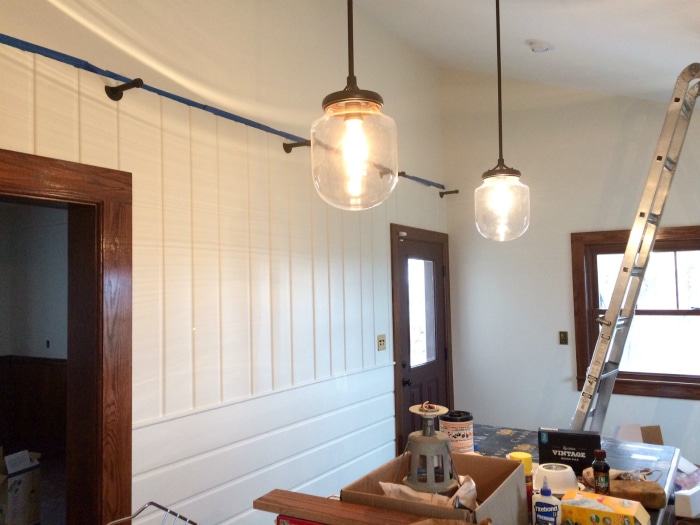 I also picked out lights for our island in the kitchen.  I agonized over this decision for MONTHS.  I am really a very decisive person, but I could not pick out lights for the kitchen island.  The ones I wanted were way too expensive.  I just refused to spend two car payments on one pendant that a $1 bulb will provide the actual light through.  I finally found a pair online at a reasonable price only to realize that I didn’t like them when we got them home.  So I ran out to a home store one morning to just pick out anything so we could move in this weekend.  And it turns out, I really like them and will probably keep them.

The lighting looks different above because one pendant has an Edison bulb light.  Wow, they are pretty.  But they do not give off much light at all. I can’t imagine being able to use them and actually see to do anything in the kitchen.  The pendant on the right is a regular bulb.  We ended up with those. 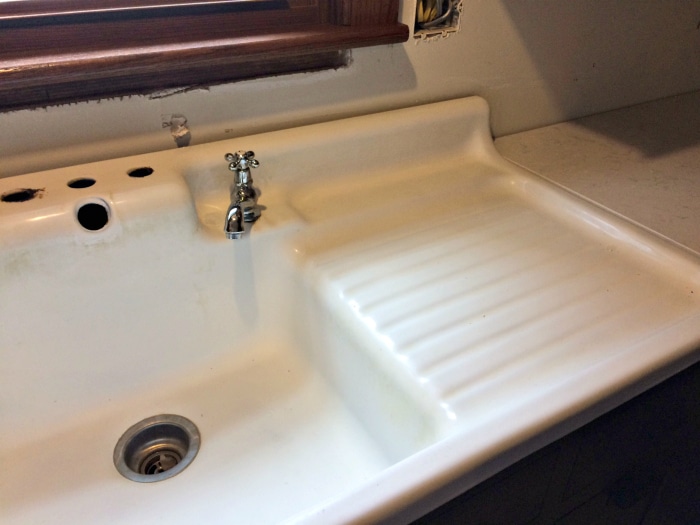 We had a cleaning crew come through early this past week to get all the dust off the floors and in every cranny of the home.  They did a great job on the sink.  It looks new.  The rest of the house, not so much.  Because we have dark woodwork, the drywall dust smeared everywhere since they didn’t apparently clean out their water enough.  Soooo, I ended up washing every single inch of woodwork in the house myself.  The good news is, we received a refund, so we ended up spending less money.  I was excited about that after the woodwork was cleaned by myself the next day. 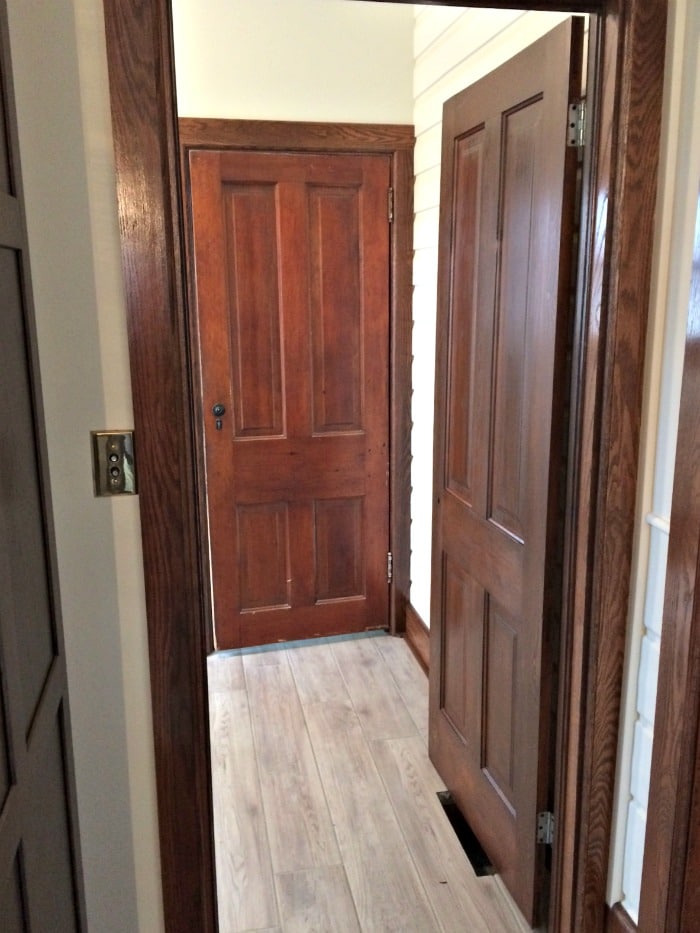 That is, until the painter showed up the next day intentionally because the house was now clean and he could do the touch ups.  And then he proceeded to sand down the doors I had purchased to match the house while the furnace was on full blast pushing dust throughout the first floor.  There are no words.  The doors look good though!  The one facing the picture fully is an original door we moved.  The door that is open is a door that I bought at a salvage place and had stained.

Our new furnace also decided to stop working.  All that plaster we had skimmed can’t go below 50 degrees and the house was 52 degrees Fahrenheit when my dad walked in.  Thankfully, we had a great company we chose to put the furnace in and they were out to the house within an hour. 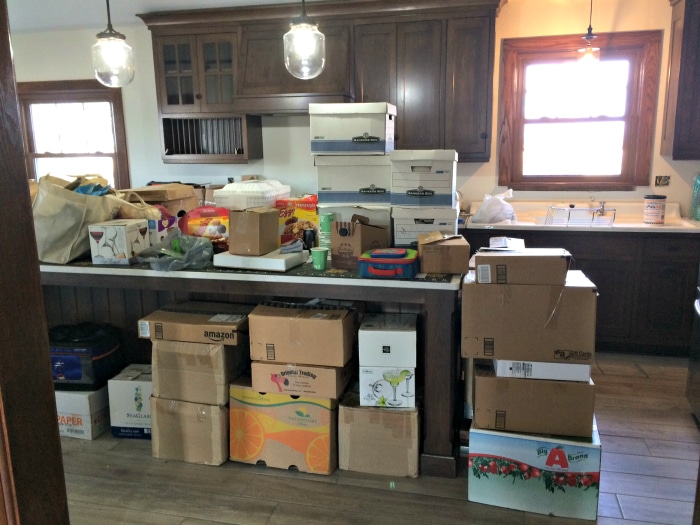 Here’s the current state of my kitchen.  Well, it actually looks worse now that I’m in the middle of unpacking.  There’s nothing that makes you realize how blessed you are with friends, than moving.  We had a great crew of friends show up joyfully to help us move in and it was only 20 degrees out.  We bribed with pizza and doughnuts, but really they are just awesome people.  My mom also had great friends stop by to bring dinner that truly blessed us.  We had our first meal as a family with my parents and my brother’s family in the home.  And they brought so much that we have enough for today which is really a blessing since there is no food in the house yet outside of what they brought.

Right now, I’m surrounded by boxes and newspaper and stuff I don’t know why I moved.  But I’m grateful.  So thankful for a beautiful home to raise my boys in and the grounding of the generations before me.

I have so much more to share with you.  So many little things we’re doing on the house that I’ll be sharing in the coming weeks.  We still need a door on our bathroom, the dishwasher hooked up, faucets on our kitchen sink and … well, decorating!  I’ll be sharing all that soon with you all after Christmas as right now I need to focus on getting my family moved in.  We also need a Christmas tree  in this home for all the gifts I haven’t bought yet.  🙂

In the New Year I’ll be sharing full room before and afters.  The details on what we bought and what we liked and didn’t like, plus lots more!