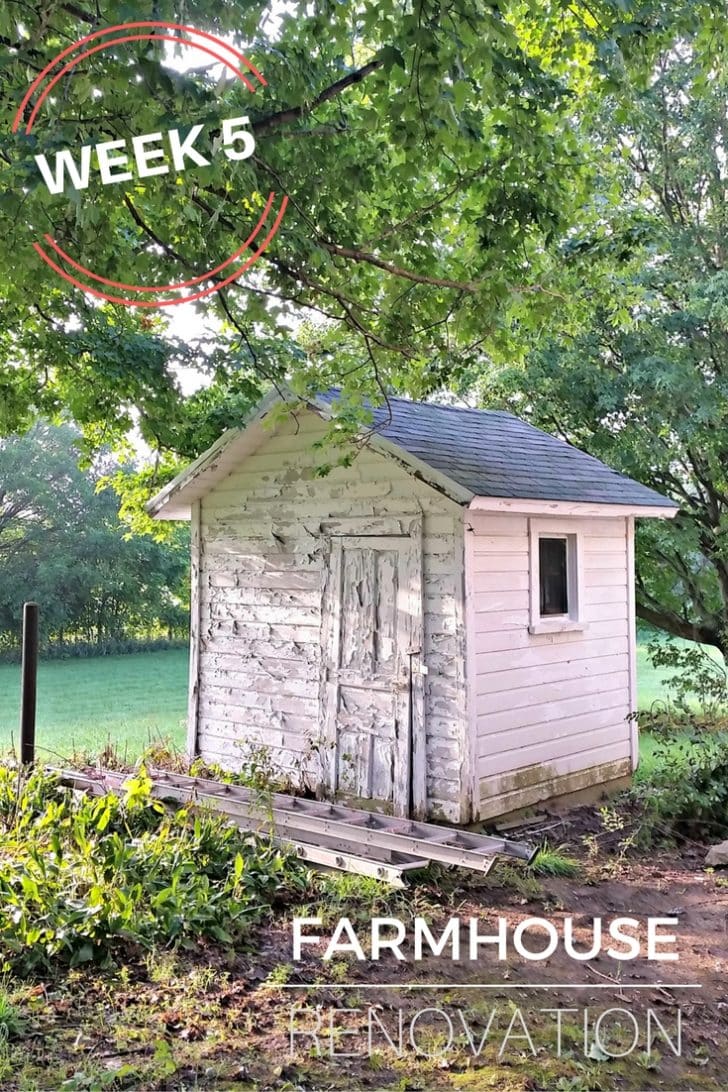 Well, this week didn’t go as planned.  At this point I thought we would have our siding almost done and our roof on the house.  That did not happen.  We had a couple of hiccups along the way.  Some out of our control and some mistakes made.  This project should be stressing me out more than it is.  However, I know we’ll get there.  It’s just a matter of when.

My oldest starts school on Monday.  Our original goal when we started the process of buying the home last spring was to be moved in by his first day.  Well, obviously, that is not going to happen.  I’ve had lots of people ask me when we’ll move in.  Right now, I just don’t know the answer to that.  It’s felt like five weeks of work with not much to show for it.  Yes, demo has made a big difference, but we don’t have the final things put back in yet making it feel like the home is a haunted house at times.  But I still love it.  😉 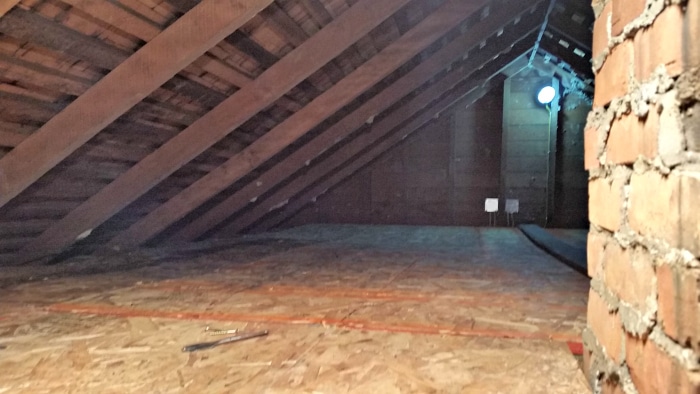 We did get one major thing done this week.  The attic now has a floor.  Our goal was to get the floor in before they started the roofing since the house has original wood shingles under the metal roof.  It would have been quite the mess for the roofers as they removed those.  The floor will allow us to sweep it all up.  It’s also going to give us much needed storage space.  This picture shows 1/2 of 1/4 of the attic.  That’s 1/8, right?  My brother came up with the idea of putting down the chip board sheets and I’m so glad he did.  This will solve a lot of our soon to be storage problems. 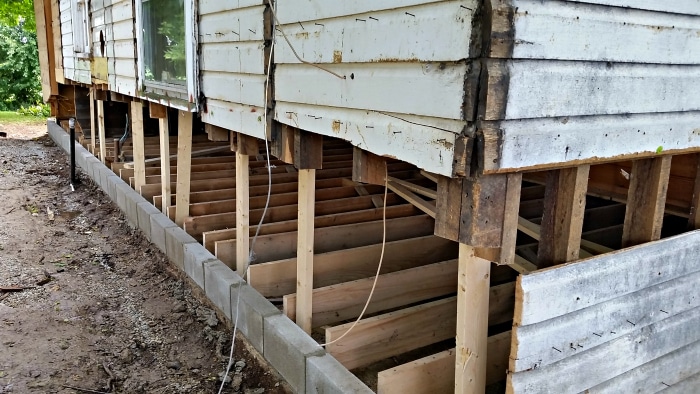 The new additional foundation is now laid in the back of the house.  This was delayed a few days because after a summer of no rain, on the week we were to start the outside projects, we got three days of rain.  It was hard to be upset because we needed the rain so badly.  The new foundation was needed because of the water running into the back of the house which had caused rot among some of the important boards.  That’s all being replaced so that our kitchen will no longer have water problems or I won’t have to think about the rot that might happen. 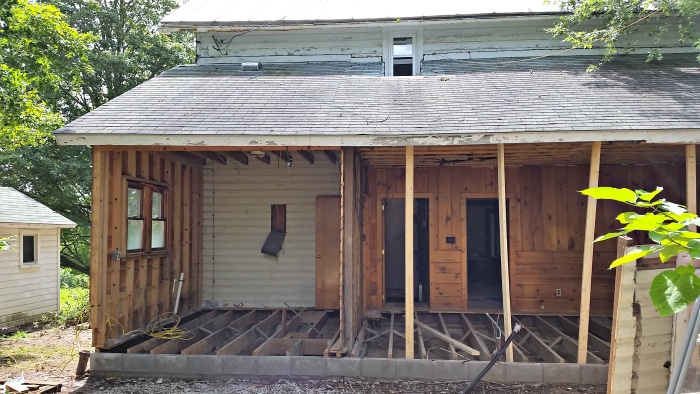 This is the current state of our laundry (on the left) and kitchen (on the right).  The laundry room was once on the outside of the house, hence the white siding you see inside the house.  A new wall will be built along the entire back side of the house.  That is hopefully going to be finished by the end of this weekend. 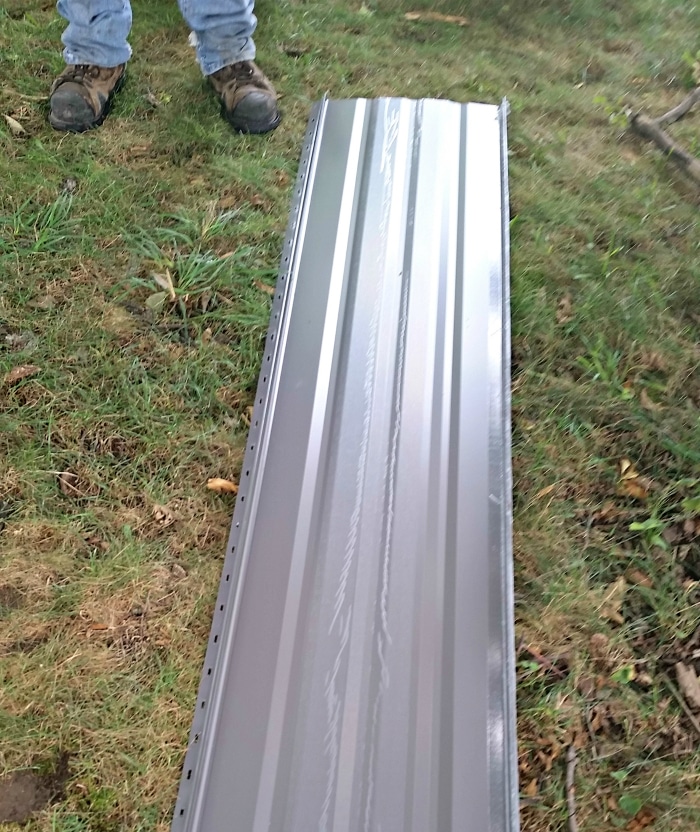 The delay in the roofing, which delayed the siding was two fold this week.  One, the rain.  Two, when the roofing came in on Tuesday it was not at all what I wanted.  We had a major disconnect between my contractor and myself.  What I was describing and what I thought was clear, was not what was ordered.  And I “okayed” the order not knowing that the brand name I was ordering was not what I had in mind.  We all learned a lot from that.  After crying and driving around the next day looking at homes with this kind of roof, we decided to just stick with it.

My original vision was standing seam which would have been the same in the picture above but without the ripples you see in the middle of it.  It was quite a shocker to open the box and not see what I thought I was going to see.  And as the roof is a major part of the house, it was a rough decision process.  I would have had to pay for the material and delayed the project to order new roofing.  I was willing to do that, as I knew we could use the roofing on a new garage some day and repairs to the barns.  But all in all, after doing some research, this is what people want right now to avoid what they call “canning” to standing seam. 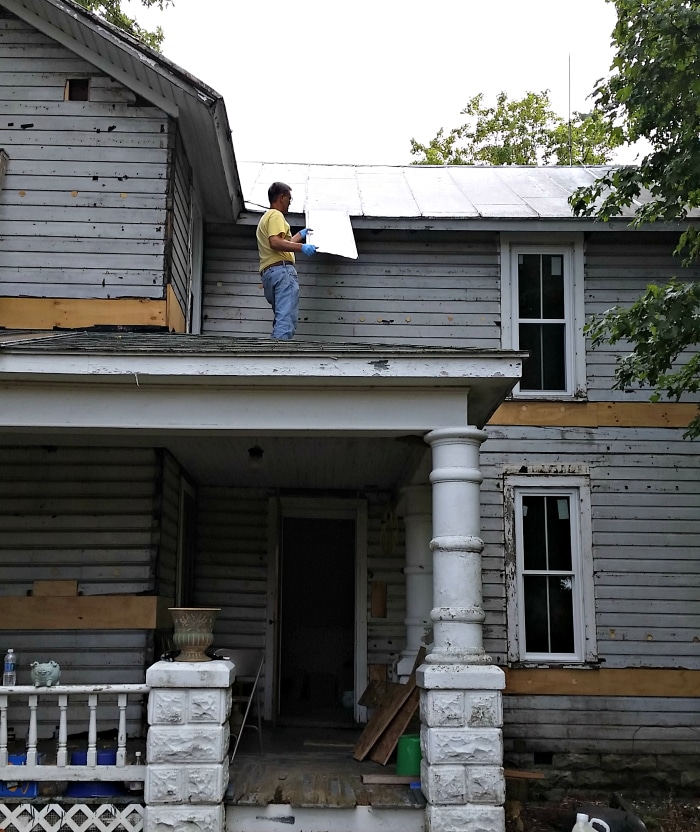 My dad was quite the trooper.  He drove around with me looking at houses to help us make a decision.  He climbed up on the roof so I could see what the new material would look like.  You really can’t tell a difference and I think it will be okay.  It’s one of those things you get hyper sensitive about – I now look at every single metal roof as I drive around.

And after a morning of driving and deciding and staying up the night before way too late researching, we’re sticking with it.  My dad and I made the decision with our contractor and then we went and got ice cream.  🙂 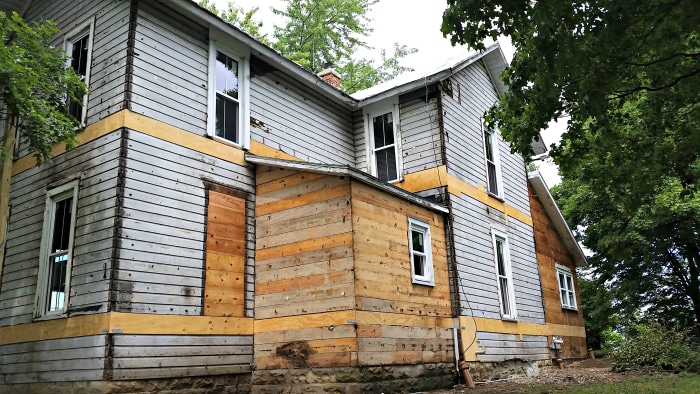 This whole week had it’s ups and downs.  I had the realization that making things look old again doesn’t quite match some of what is available today.  The “old look” is in, but products are made to be perfect.  Back then, things were not perfect.  The “canning” or imperfections that happen on standing seam roofs, don’t bother me.  I can see how they would bother someone with new construction.  When fixing up an old house, I don’t mind the old house imperfections.  I want to feel like I’m living in my imperfect farm house from the 1800s. Otherwise I would have bought my perfect new house.

As I processed all that this week, my brother reminded me that very little in the house at times is truly original.  You can see above where the bathroom was added where a porch originally was.  Obviously, we’re not getting rid of the bathroom.  The back of the house has an added laundry room.  Doors were removed, windows were removed and we have what we have now.  I can only bring back the original to a certain extent and I’m going to have to be okay with that. 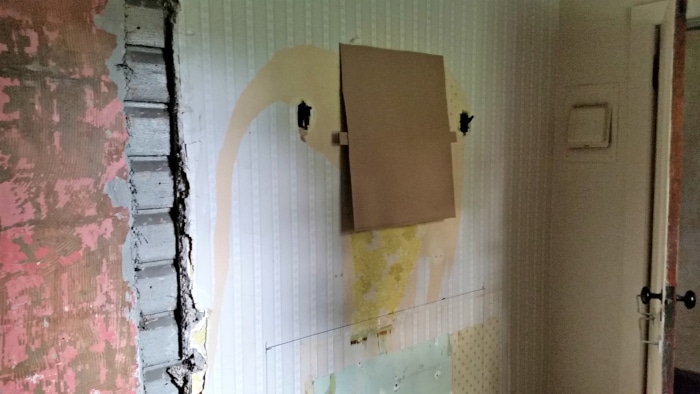 Finally, some of the decisions, like where to put the new sconces in the bathroom, needed to be made for the electrical.  In order to know where to put the sconces I needed to know what vanity and mirror I wanted to make it all look right.  I drew the vanity on the wall.  I then cut out the mirror.  I’m so glad I did.  I’m looking at a pivot mirror like this one but in bronze.  I thought I would order large, but it was HUGE.  I then recut to the “regular size” and liked it so much better.  Being a visual person, I need to do this as much as possible. 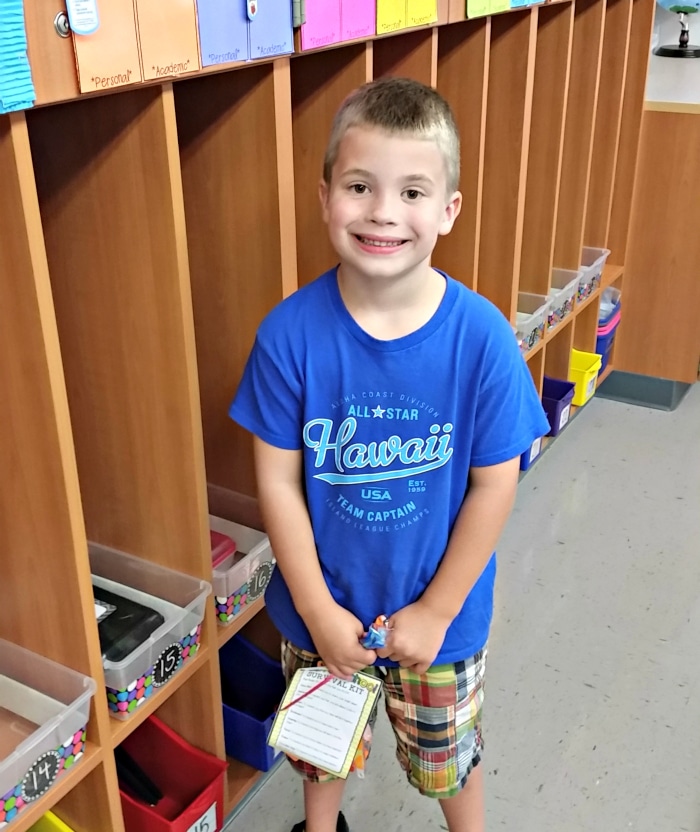 Amidst all the crazy, we had open house this week at my son’s new school.  It reminded me why we’re doing this.  He loves his school and can’t wait to start on Monday.   I’m so proud of him.  It wasn’t his choice to change homes and schools.  But I’m grateful he’ll have the opportunity to grow up in a rural area on the farm his great-great-great-great grandparents built.  It’s making this all worth it.

Now, I’m off to try to find his backpack in the barn where all our stuff is stored.  Ha!  #wishmeluck