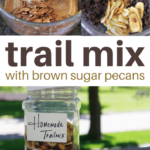 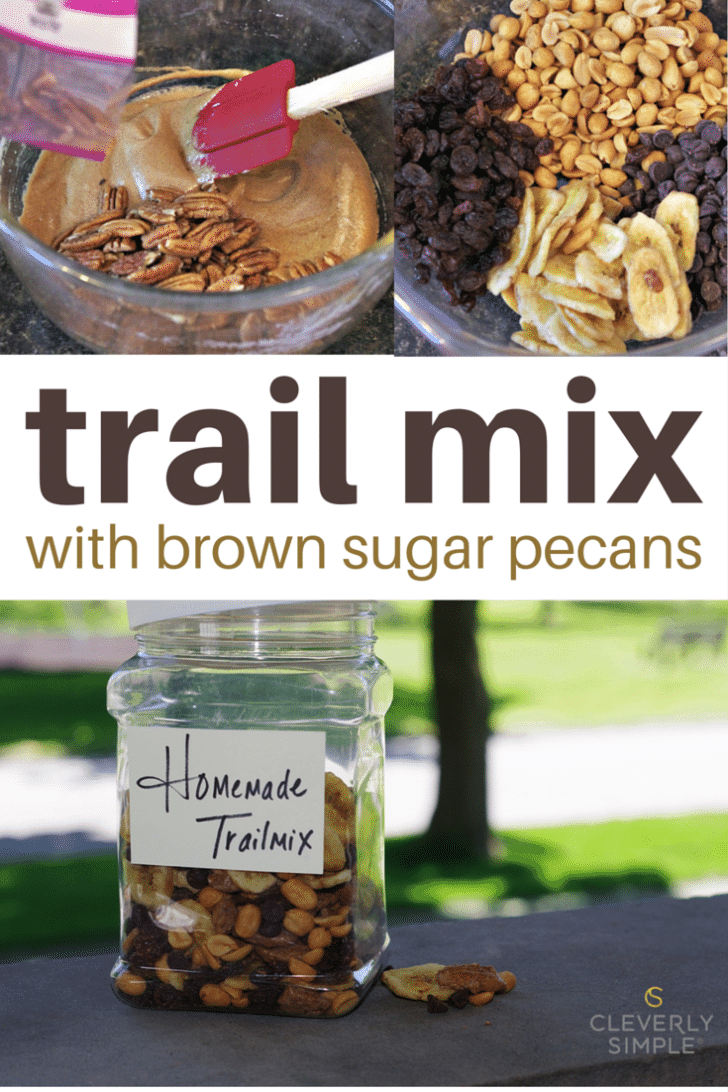 In my world, trail mix is simply the best snack. It’s easy to store, requires no eating utensils, is both nutritious and delicious. Not to mention the fun in picking out your favorite part of the mix! In doing some research, I learned that the combination of nuts, fruit and chocolate as a snack dates back to the early 20th century when an outdoorsman named Horace encouraged it during one of his camping guides. With a name like Horace, how could you resist? His invention quickly spread across the country and a hundred years later, you can find trail mix interpretations at most any grocery store. There are even nut-free, gluten free and sugar free versions. Trail mix is literally for everyone.

Trail mix is also very simple to make! For my family, I like to create my own fruit and nut combinations. Today, I’m sharing my family’s favorite mix recipe, which includes grandma’s brown sugar coated pecans. Add in some salty peanuts, two kinds of dried fruit, a helping of dark chocolate and you’ve got yourself a crunchy, sweet and salty mix good enough to dream about. Sometimes I think our family creates adventures JUST so we can make this trail mix!

Are you ready to make a batch with me? 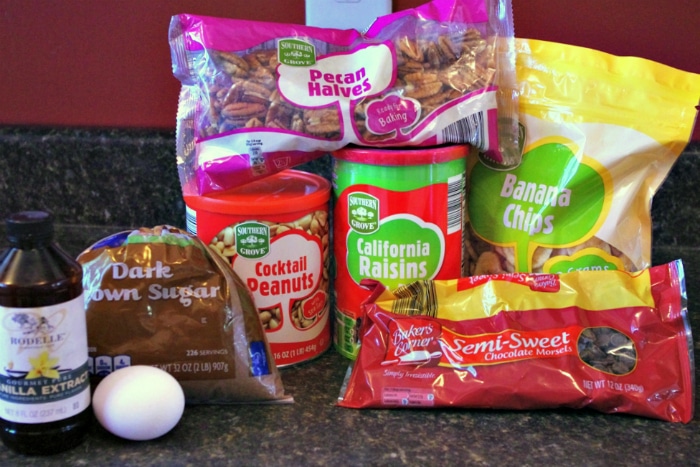 As with most trail mix recipes, you will need dried fruits, nuts and (unless you’re crazy), some chocolate! I use a 2:2:1 ratio – two fruits, two nuts and one chocolate. Now, you might be wondering what on earth an egg is doing in this trail mix photo. Haven’t you heard of hard boiled eggs in trail mix? (Just kidding 🙂 The egg is there because I am going to include my grandma’s brown sugar pecans. Friends, these pecans are amazing… I could make a batch of her pecans and eat them straight from the baking pan…but then it wouldn’t be trail mix, right?
The beauty of all this is that you don’t have to follow my recipe exactly. Below are some alternative ideas for nuts, fruits and add ins. 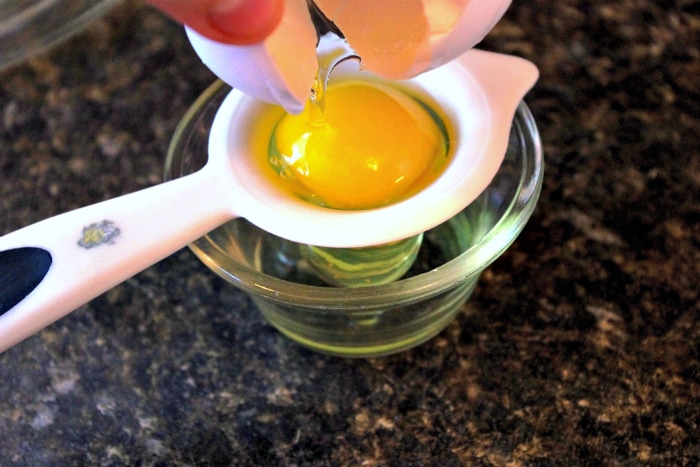 Let’s start making those pecans! Preheat your oven to 325 degrees.
Start by separating the yolk from the egg white in your large egg. I use a handy dandy egg separator to do this, but some special people out there can do it with their hands. 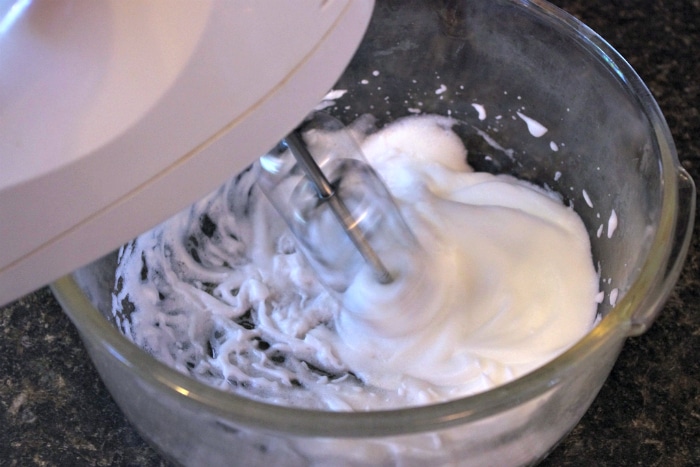 Using a hand held or standing mixer, beat your egg white in a large bowl until stiff peaks form – about 3 minutes. 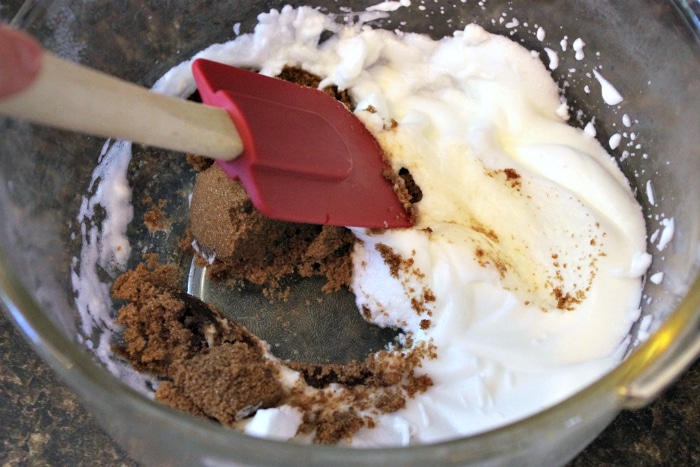 Fold in 1/2 cup packed dark brown sugar and 1/4 tsp. pure vanilla extract. This recipe was originally for 16 oz. of pecans, but since my package of pecans from Aldi is only 10 oz, they will have extra coated goodness! 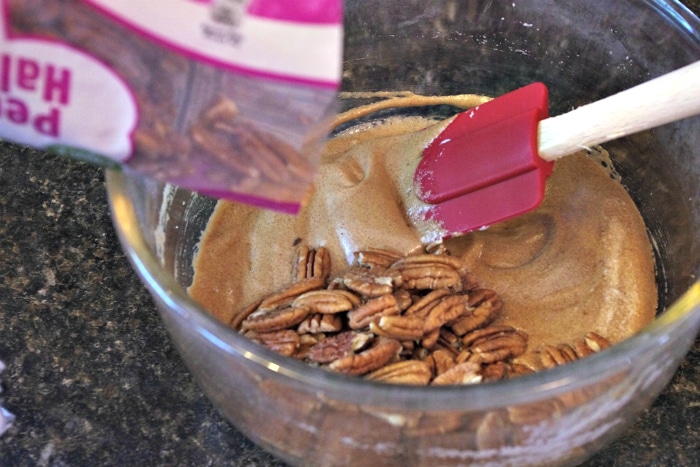 Coat the pecans evenly with the sugar mixture and spread them onto a large baking sheet. Then pop them in the oven and set the timer for 12 minutes. 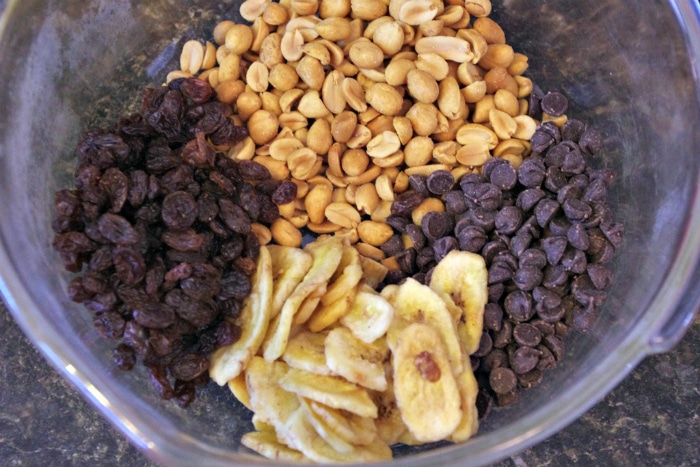 While your pecans are baking, get out an ol’ mixing bowl and pour in 1 cup salted peanuts, 1/2 cup raisins, 1/2 cup banana chips and 1/2 cup dark chocolate chips. We will later add 1 heaping cup of the cooled pecans. At this point, feel the freedom to double, triple or even quadruple the recipe to your liking! 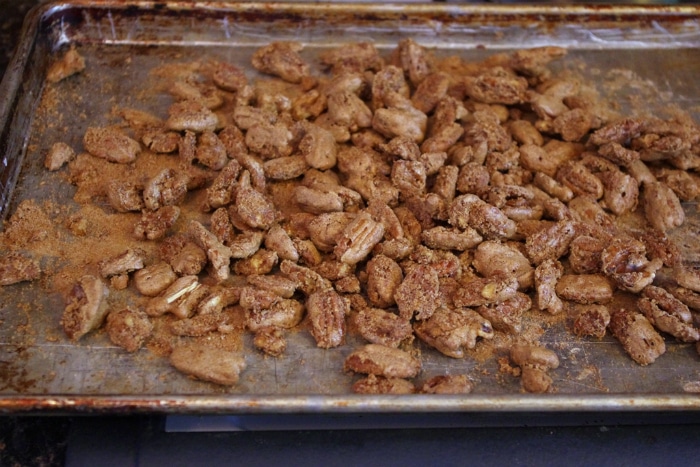 Ding! The 12 minutes are up. It’s time to flip the pecans over (it’s normal for them to stick a little) and bake for another 3 minutes until golden. They will crunch up as they cool. Then, add 1 heaping cup of them to your other ingredients. Save the remaining brown sugar pecans for salads, more trail mix or just gobble them with a cup of hot tea! 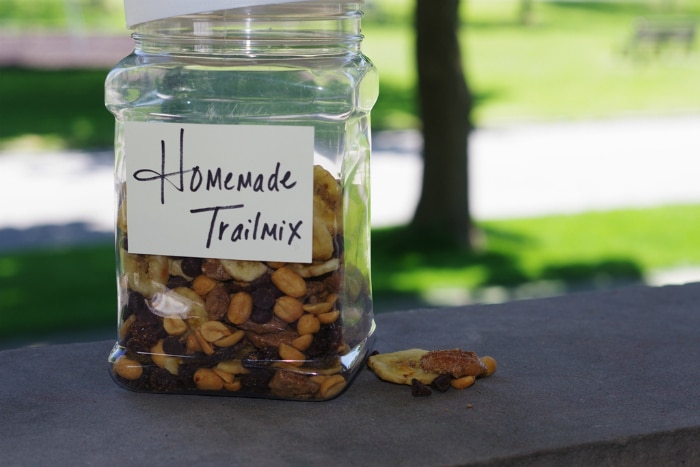 Stir it all together and store your trail mix in an airtight container ready for the next adventure – if it will last that long! Whether you’re gathering energy for that summer hike, long car ride, afternoon snack or …just because.  Trail mix is simply the best. 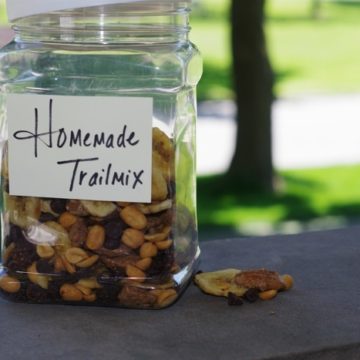