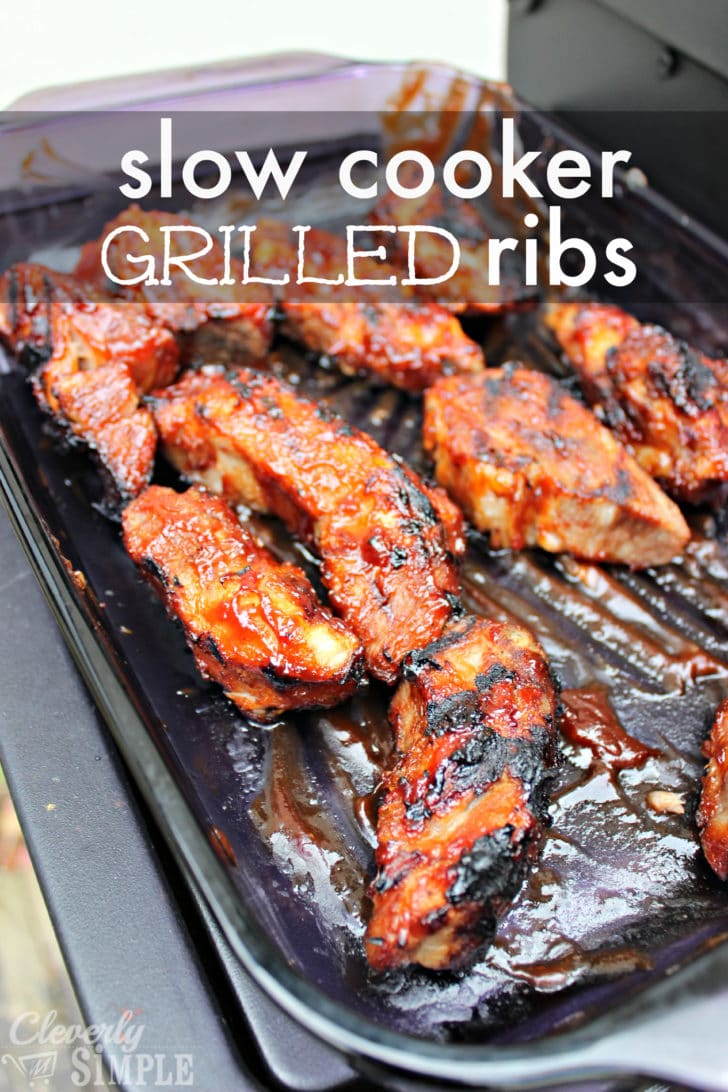 I revolutionized the way I cook ribs by using my crockpot.  A few weeks ago we traveled down to Cincinnati to celebrate my 1st cousin’s once removed birthday party.  His parents (the 1st cousins), made ribs for dinner.  And let me tell you, they were THE BEST ribs I’ve ever eaten.  I love ribs. I really do.  But cooking them at home is totally intimidating to me.  I don’t know why.  They’re like this foreign piece of meat.  If it’s not chicken or ground beef, I over analyze the cooking of it and sometimes avoid it all together.

After having the best ribs of my entire life, I asked my cousin how she made them.  And I could not believe how easy it was.  One could say it was Cleverly Simple.  🙂  While she boiled her ribs, I decided to use the crockpot.  My main reason for using the slow cooker was the very fact that in the middle of the cooking process I was going to have to pick up my five year old from preschool.  A boiling pot of meat left on the stove in an empty house, did not sound like the brightest idea.  So, again, I love my crockpot! 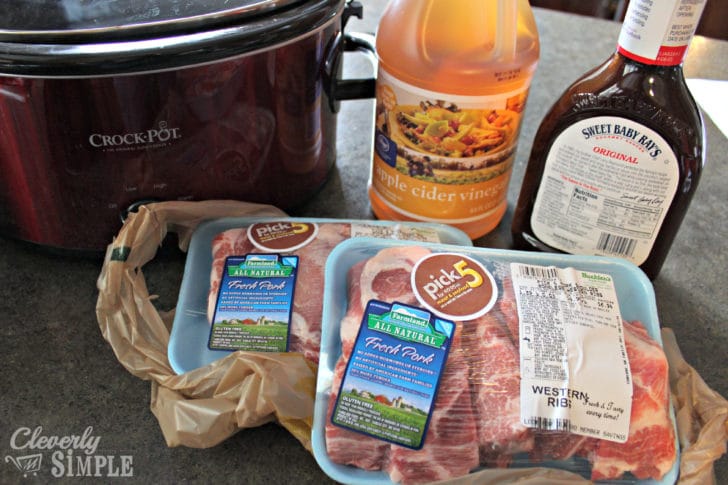 Ribs (I chose Western style to make it easier for my boys to eat but you could use the regular ribs as well.  We used about 3 pounds.)
1 1/2 Cups Apple Cider Vinegar
Approx. 5 Cups of Water
Sweet Baby Ray’s BBQ Sauce (or your personal fav)
Crockpot
Grill 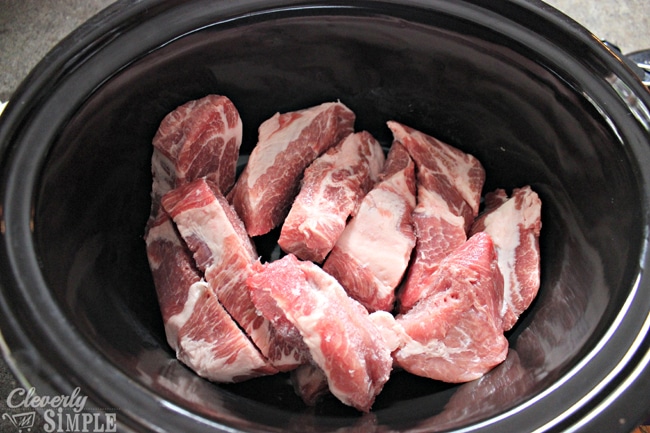 Add your ribs to the crockpot.  In full disclosure, the ribs were partially frozen.  That’s how I roll.  Nevertheless, in they went!  Add 1 1/2 cups of Apple Cider Vinegar.  Then add enough water to fully submerge the ribs. I used about five cups but you may use more or less depending on the amount of ribs you’re making and how large your crockpot is.

Also, I used a 1/2 cup of Apple Cider Vinegar per pound of ribs.  You can up the apple cider if you’re making more. 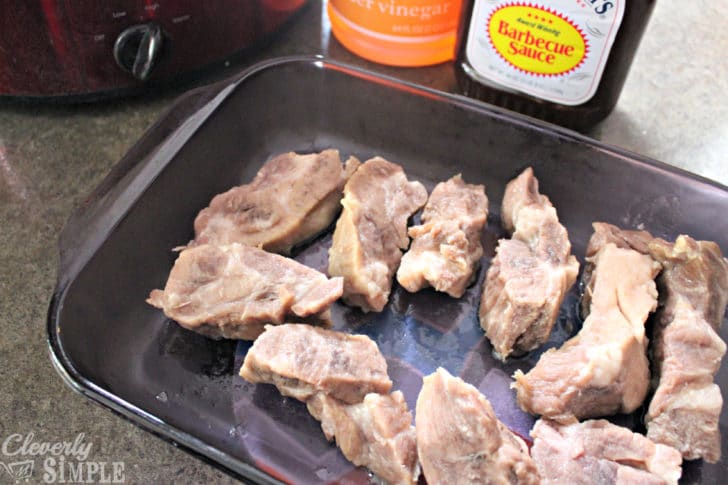 Cook in the crockpot on high for 4 hours.  You can go longer if you’d like and you may need to if you cooking more than 3 pounds.  Once the four hours was over, I placed the ribs in a dish and coated them with BBQ sauce.  Coat all sides. 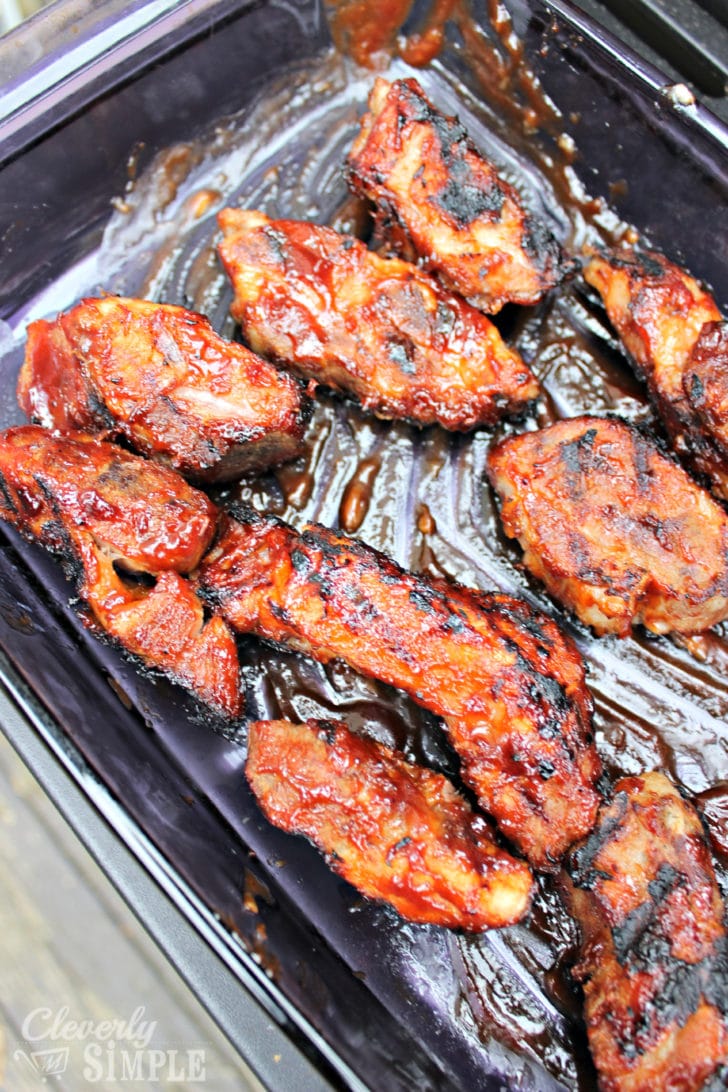 Place them on a grill for a few minutes on each side to let them crisp up.  Every time you turn them, give them another layer of BBQ sauce.  The goal with the grill is to get that crispy BBQ sauce on every corner. You’ve already cooked them in the crockpot.

This Slow Cooker Grilled Ribs recipe is great if you’re entertaining because you can get the ribs cooked before the guest arrive.  Just a few minutes on the grill and you’ll have the most tender and delicious ribs! 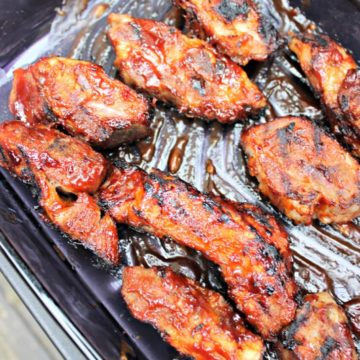