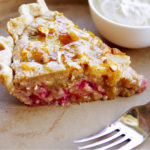 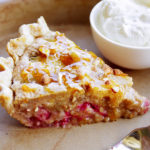 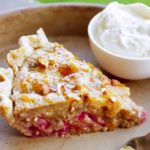 This pear pie recipe is made with fresh raspberries, raspberry jam and an amazing almond filling with pressed canned pears and apricot glaze.  The combination of flavors makes a pie like no other. 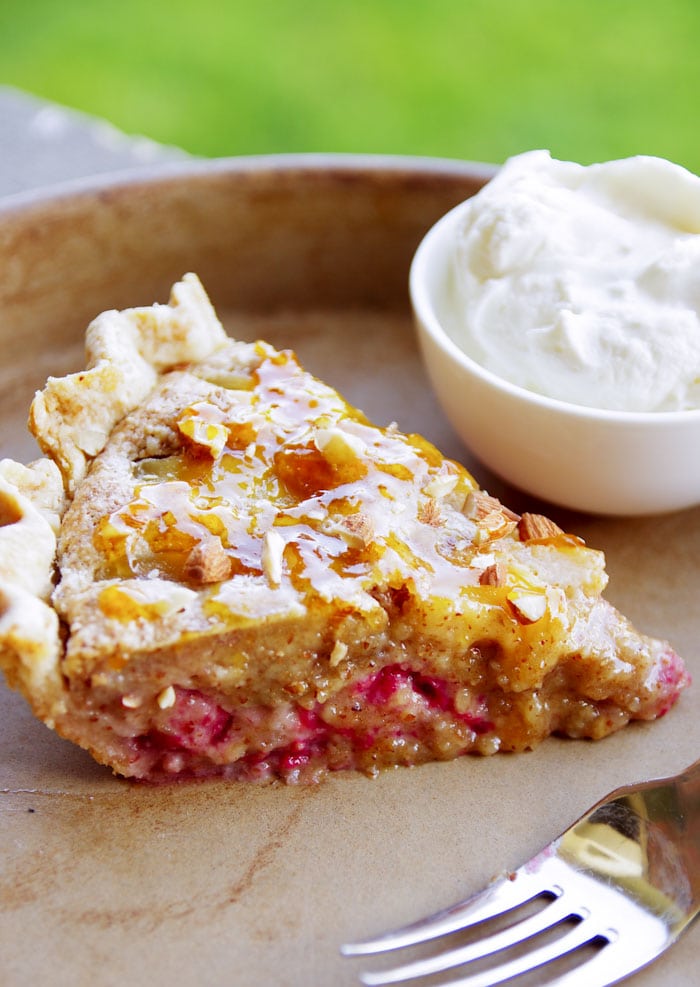 Pear pie with almonds and raspberries is my ultimate favorite. It’s different than a custard pear pie.  I can’t even tell you how this pear pie recipe started. I think its story began eons ago with a grandmother online who said she had an abundance of pears on her property and made up a recipe for pear pie with almond filling. I no longer have her original recipe, but I have my own version of it that includes fresh raspberries, raspberry jam, that amazing almond filling with pressed pears and apricot glaze. You might be wondering how and why three different fruits pair up so well with almonds, but folks, this pie is unlike any you have ever had. Its flavor is even difficult to describe! Perhaps our family friend says it best. “It tastes like an expensive dessert from Europe.”

The Secret To Making Pear Pie

A secret to this almond pear pie is in its simplicity. With just 10 ingredients and the help of a food processor, this pie stands up to its reputation on both sides of the kitchen. I have made this for holiday dinners, tea parties or just to give an exquisite ending to an everyday meal. It is wonderful!

Are you ready to make an almond pear pie with me?
Come on in to my kitchen!

How To Make Pear Pie 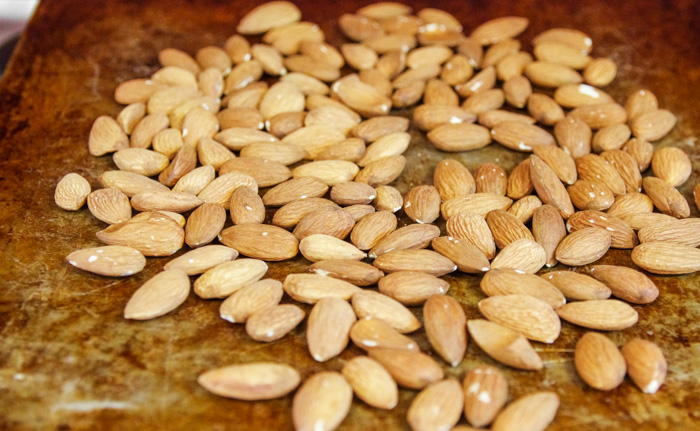 First, toast one rounded cup of raw, whole almonds, plus a few extra for the garnish later. I usually do this by laying them on a cookie sheet and putting them in a preheated 350 degree oven for five minutes. 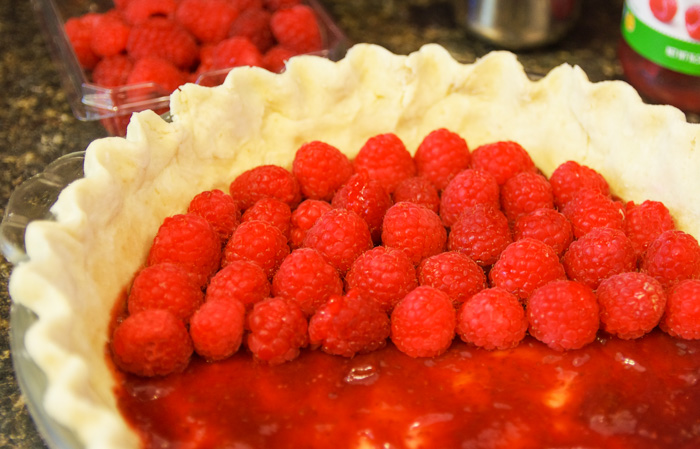 Step 2 – Spread the Raspberries and Raspberry Jam on Pie Crust

In an unbaked pie shell, spread ½ cup of good quality raspberry jam at the bottom. Then, layer two 6 oz. packages of fresh raspberries on top, open side down. One package will cover half of the pie. 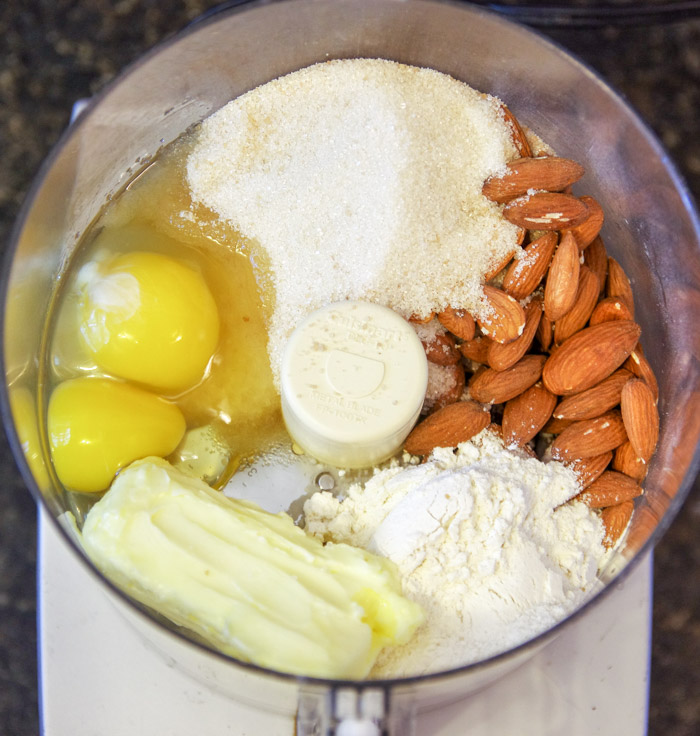 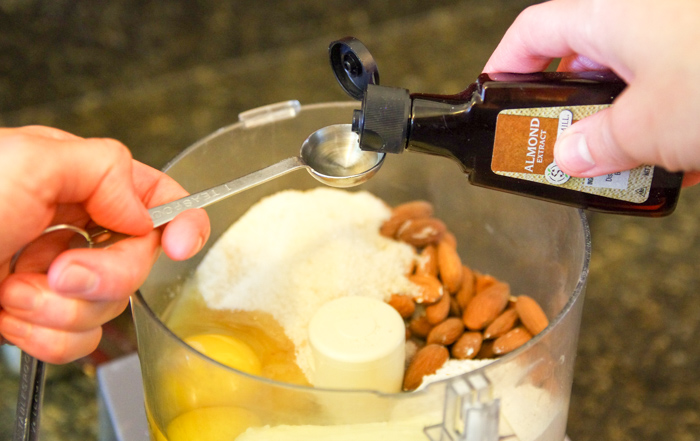 What really takes the almond flavor over the top is by adding 1 tsp. of almond extract to the processer. I don’t know if there is a science behind it, but almond flavor with tart fruit creates a delicious combination. Many people put almond extract in their cherry pie for that very reason! 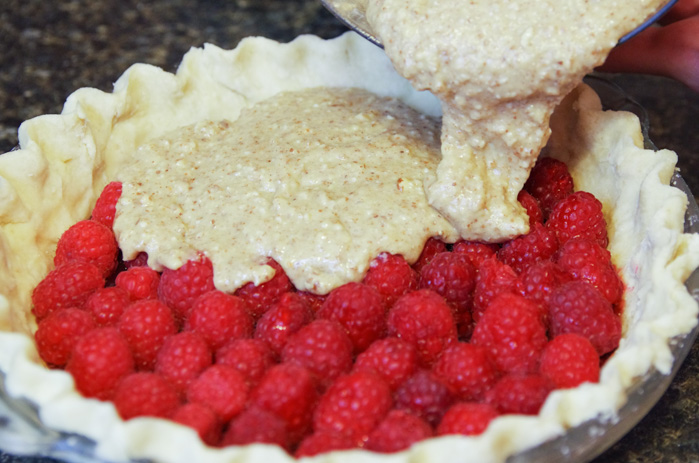 Process the ingredients until smooth and then spread it evenly on top of your raspberries. When finished, you should not see any red peeking through. The filling will hide the fruit and jam like a surprise 😉 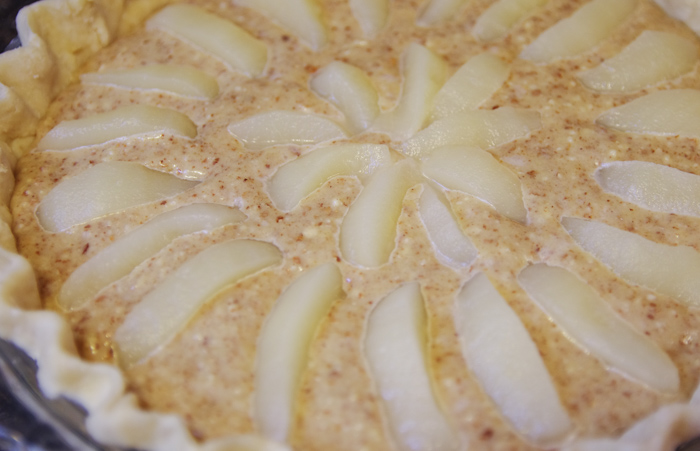 Using drained, canned pear slices, press them gently into the top of the filling using any design you like. I often use home canned pears, but today, I am using a 15 oz. can of slices preserved in juice. Be sure to drain them well before pressing them in. 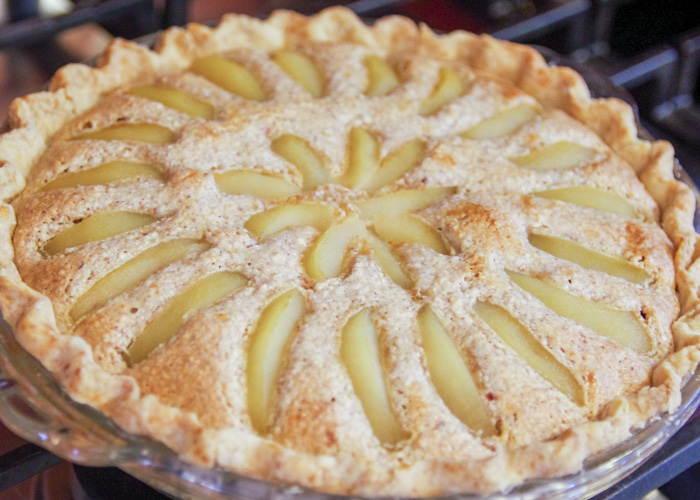 Bake your pie at 350 degrees for approximately 50 minutes or until the middle is set and the top is golden brown. 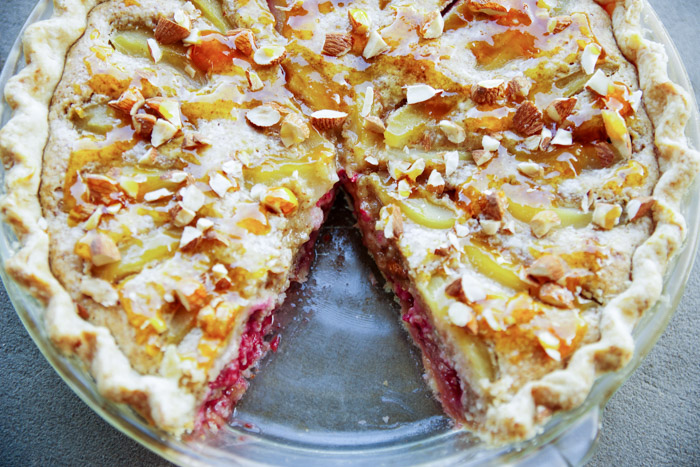 Allow the pear pie to cool slightly and then spread 3 T. of apricot preserves on top with extra chopped, toasted almonds. The sweet-tart of the apricot really finishes the pie.  Again, I don’t know how to explain it, but trust me, the flavors are outstanding! 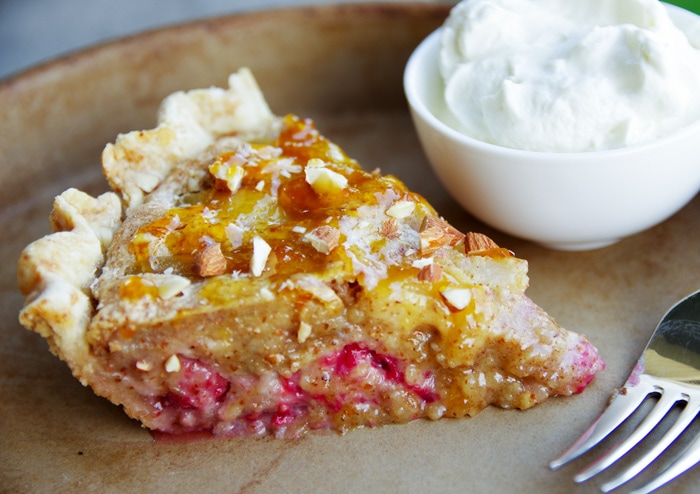 Here is side view while it’s still warm and served with real whipped cream. You can see how the top almond filling baked into the bottom raspberry layer. Um, you’ll have to excuse me….I need to put the camera down for a moment… 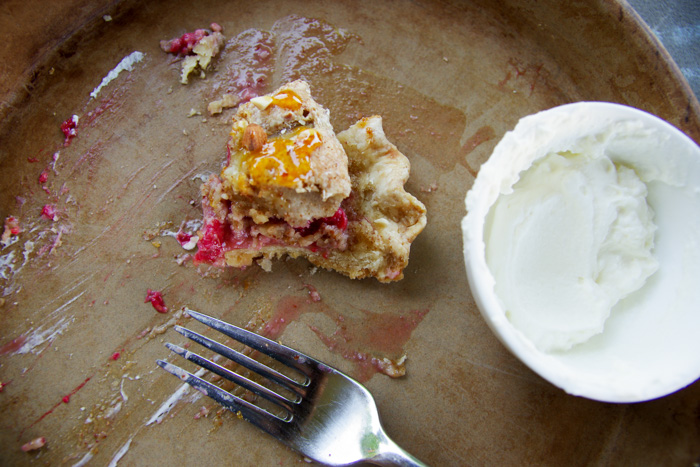 Ah… soooo good. My friend is right. I can totally envision myself sitting outside of a French café with a cup a coffee as I enjoy this little pear pie slice of heaven.

This pear pie recipe is made with fresh raspberries, raspberry jam and an amazing almond filling with pressed canned pears and apricot glaze.  The combination of flavors makes a pie like no other.

The nutrition information listed below does not include the pie crust.